Lord North completed his journey from handicapper to Group 1 hero on Wednesday when he was a decisive winner of the Prince of Wales’s Stakes at Royal Ascot.

The four-year-old, winner of the Cambridgeshire Handicap last year, was following up his impressive success at Haydock in the Group 3 Brigadier Gerard Stakes at Haydock earlier this month. Despite being last as the field entering the home straight, he showed a stunning turn of foot to burst through the pack.

Once in the clear, there was no stopping Lord North as he sealed a three and three-quarter length success over Addeybb, with a length and a quarter back to Barney Roy in third.

There is likely to be even more improvement from the Dubawi gelding and he could be a contender for next month’s Coral-Eclipse.

His trainer John Gosden was suitably impressed by the manner of Lord North’s victory and said: “Lord North has got better and better. He is very powerful, and, for a gelding, he has a great body to him. I was looking at the race and talking to Peter [Shoemark, Gosden’s Racing Manager] and I thought this race was winnable for Lord North, so at 09:55am we put him in – it was very late.

“I was toying between this race and the Listed Wolferton under a penalty as you want to have a winner at Royal Ascot. I said no, let’s go for this.

“I would say give him a week, ten days and see how we are. He has had two very quick races. He blew up at Haydock. He has had two hard races, so we’ll freshen him up and then make decisions.”

Winning jockey James Doyle added: “I was asked if it all played into my hands, and I guess it did in the sense of how the race panned out. I didn’t see them going as quick as we ended up going. I think Japan missed the break, Bangkok ended up going forward and I felt it was a pretty even-run race.

“Lord North settled beautifully out of the back, took me into the race nicely and showed a good turn of pace when I asked him, so it certainly wasn’t a fluke, and he can continue this and be quite a strong force in these types of races.”

Doyle found himself back in the winner’s enclosure after he partnered the Andrew Balding-trained Tactical to capture the Listed Windsor Castle Stakes in the colours of Her Majesty The Queen, her first winner since Dartmouth’s victory in the 2016 Hardwicke Stakes.

John Warren, the Queen’s Racing Manager, said: “Everyone involved is thrilled. All of Her Majesty’s stud team and staff team at Sandringham and Polehampton through to the operations that provide the horses and obviously Andrew Balding and his team. It is a big team effort and it’s wonderful for Toronado to sire a big two-year-old winner like that.

“It is lovely for the Queen. She has a nice, young mare [Make Fast, dam of Tactical] and this is her first foal. Throughout the conversations, Her Majesty was saying how delighted she was to breed a two-year-old winner. It is lovely to breed and own a lovely Royal Ascot two-year-old.

“It is obviously a great shame that Her Majesty is not at Royal Ascot to enjoy the buzz of a winner. She has studied every bit of it today watching the races. The last two days she has been able to spend a little bit of time watching the big races.

“This was the icing on the cake to have a winner for Her Majesty – it is tremendous.”

There was a second Royal Ascot success of the week for Aidan O’Brien and Ryan Moore as they combined with Russian Emperor, who denied the Queen’s First Receiver in the final strides of the Group 3 Hampton Court Stakes.

The victory was a 60th success at the Royal meeting for Moore and after the race, the jockey said: “He is a lovely colt, straightforward and with a good attitude. He was very professional; he has had the benefit of a couple of runs this year and let us see if he will keep progressing.

“He has a very good pedigree – his dam was exceptional in Australia. I think he will be a nice horse going forward for the rest of the year.”

Russian Emperor boasts a classy pedigree being a son of Coolmore’s perennial champion sire Galileo and is out of the Fastnet Rock mare Atlantic Jewel, winner of four Group 1s in Australia including the Thousand Guineas and Caulfield Stakes.

Firsts for Knight and Burrow

Having relocated to Newmarket only a couple of months ago, William Knight was celebrating the benefits of that move when Sir Busker landed the Silver Royal Hunt Cup to become the trainer’s first winner at Royal Ascot.

The race, which is a special contest this year for horses who failed to make the cut for the Royal Hunt Cup, saw the Kennet Valley Thoroughbred-owned four-year-old power home under jockey Oisin Murphy.

Previously based in West Sussex, Knight said: “It is a great facility that we are in in Newmarket, and it’s just lovely to have started off so well and to have my first Royal Ascot winner is the icing on the cake.

“It is such a shame that we can’t enjoy it all with the owners, Kennet Valley, because they are such a lovely group of people; I’m sure there would have been a good booze-up in the car park afterwards, but we will have to wait and get home to do that.

“I was quite confident when I saw Oisin had him settled early on. I think it took us through last year to work out how the horse needs to be ridden. If you put him into the race too early, he will be too keen. It suits him on this course to be ridden that way – it is a hold up track here.

“It was important to run him at Newcastle on the first day back [June 1]. He is a big burly horse and to get that blow into him there really brought him on. That was my first runner from the new yard, and my father died that morning, so he means quite a lot to me, this horse.”

Knight wasn’t the only trainer to record a landmark first on Wednesday as Owen Burrows notched his first success at the prestigious meeting when Hukum fought off the challenge of Kipps to win the King George V Stakes.

It was a fourth winner of this year’s Royal Ascot for jockey Jim Crowley and owner Sheikh Hamdan Al Maktoum.

Burrows said: “Hukum has always been a horse we have liked. He does enough at home without blowing you away. He was due to run at Newmarket a couple of weeks ago, but I wasn’t quite happy with him.

“I just thought we will forget it and I took him to Kempton last week and he worked as well as he had last year. He had options this week, but off [a mark of] 90 I thought we would come here.

“It is a big step up for a horse who has only had a couple of runs, but he travelled nicely and stuck to it well.

“As a kid and when I was battling around Fontwell and Plumpton 20 years ago, I would never have dreamed I would be here training a Royal Ascot winner for someone like Sheikh Hamdan.

“All thanks to him for having the trust in me to do the job. I was very fortunate to have had a great grounding at Sir Michael Stoute’s where I was around good horses and you can pick up plenty – I have just been very fortunate.”

Elsewhere on Royal Ascot’s card on Wednesday, the Royal Hunt Cup went the way of Godolphin’s Dark Vision while the Copper Horse Handicap saw the Roger Varian-trained Fujaira Prince came in for favourite backers with a smooth success in the 1m6f contest. 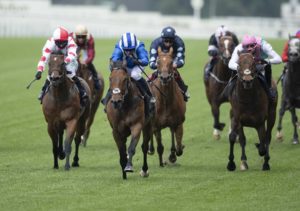