No Royal Ascot for Quiet Reflection

Quiet Reflection will not be taking up her engagement at Royal Ascot this week after suffering a setback.

The star four-year-old filly made her return to the racecourse last month in the Group 2 Temple Stakes at Haydock, where she finished down the field in tenth behind Priceless.

It had been well documented that the daughter of Showcasing had taken a while to come to hand this season for her Spigot Lodge handler Karl Burke.

“The silver lining is that it doesn’t look like it would have been her ground anyway, but even if it was she wouldn’t be going.

“She’s just had a recurrence of the problems which affected her early in the season and it will rule her out of the July Cup, too.

“We’ll hopefully have her back for an autumn campaign and the obvious races are the Sprint Cup at Haydock and Ascot on Champions Day.”

She gave her connections, which include owners Ontoawinner, a notable day in the sun 12 months ago as she made a successful step up to Group 1 company in the Commonwealth Cup at the Royal meeting.

Subsequent to that performance, see notched her second victory at the highest level when beating The Tin Man in the Haydock Sprint Cup, a race which she is likely to be targeted at again.

With Quiet Reflection out of the Diamond Jubilee, last year’s July Cup hero Limato heads the betting at a general price of 3/1 with The Tin Man and Magical Memory next best. 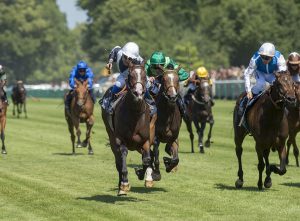 Up Next
Senga captures eventful Diane