Training in the shadow of giants
Stories

You have been riding for 23 years for Mark Johnston, who has trained over 100 winners every year since you joined him. How did the association start and what is the secret of your long-standing success together?

I came to England to work for Squeak Fairhurst in Middleham and my first winner was in a four-runner hurdle at Sedgefield. However I lasted only about three months over jumps because I broke two vertebrae in my neck in a fall at Newcastle.

On reflection, I was too light and shouldn’t really have been riding over hurdles. Then I started out on the Flat for Squeak and lost my claim in two seasons.

After that I realised how tough it was riding without a claim and had a couple of quiet years, though I did manage to win the 1993 Northumberland Plate on Highflying for George Moore.

I thought it might help if I applied for a riding-out job at Mark Johnston’s with no promise of any race rides. Things gradually took off from there when the winners started to come.

As far as our success together is concerned, I never argue with Mark! To be honest, he is very easy to ride for and doesn’t tie you down with instructions.

Mark is a very hard-working man; I suppose his work ethic rubs off on all.

What makes the Middleham maestro tick and how does he transmit his winning formula to his staff?

Mark is always trying to improve. He never stands still and is forever setting the next target and raising the bar, which takes a bit of doing when he is training 200 winners a year.

He is also very good at delegating to his staff, in particular appointing his yard managers, who do such a good job.

The whole stable is run very professionally; Jock Bennett and Mark’s son Charlie are the assistants who ensure the job runs smoothly.

Mark is strong on discipline, doesn’t stand any nonsense and expects good manners and respect.

It’s never nice being jocked off a decent horse; just because I don’t complain doesn’t mean it doesn’t bother me

One of the great characteristics of the Johnston horses is their will to win. This must give you confidence every time you go out to ride a runner from Kingsley House…

You know all the Mark Johnston horses are fit and well and ready to do their best when they go to the races.

Of course, I know a lot of the horses after riding them on the gallops, but then with there being so many in the stables I can’t be familiar with all of them.

Having said that, I haven’t ridden out for any other trainers in 20 years or so and I respect the loyalty he has shown me. It’s something that works both ways.

After you won last year’s Middle Park Stakes on The Last Lion, Mark said: “Many times he’s been jocked off over the years and had to play second fiddle to a chain of jockeys. He never complains. He turns up every day and never lets us down.” So how do you cope when these things happen?

It’s never nice being jocked off a decent horse; just because I don’t complain doesn’t mean it doesn’t bother me. You just have to keep your head down and keep going.

As we know, Mark trains a lot of horses for Sheikh Mohammed, who employs retained jockeys, so it is understandable that they will be on board in the big races.

Mark is responsible for plenty of other horses and has hundreds of winners. I am very much involved in the set-up and long may it last.

The Last Lion’s victory in the Middle Park Stakes was your first in Group 1 company. What did it mean to you to score at the top level after such a distinguished career?

I have ridden something like 28 Group 2 and Group 3 winners, but it was the Group 1 that had been missing.

I wouldn’t have liked to face retirement without that Group 1 so I did have a feeling of relief as I came back in on The Last Lion at Newmarket.

It was nice to tick it off. There were no special celebrations; I flew back from Newmarket to Middleham in Mark’s plane and the job continued as normal.

Your career has been relentless, topping 100 winners in a year on nine occasions. Have there been many injuries along the way and how tough has it been watching your weight?

I started off with that neck injury at Newcastle during my very short jumping career. It is ten years since I broke two vertebrae in my back in a fall in the Schweppes Mile at Goodwood and was out of action for seven months.

So often those falls on the Flat can be bad in big, tightly bunched fields. But then that’s part of the job. I have also had broken collarbones in falls at Ayr and Hamilton, and more recently broke my heel at Wolverhampton in June.

I was out for three months; it couldn’t have happened at a worse time of year and meant missing the bulk of that season.

I weigh 8st 1lb stripped and never have any problems in that respect. I am fortunate that my weight is always level and the only time you’d find me in a sauna would be if Mark had one in a big handicap with 8st 1lb.

My regular exercise is a daily two-mile walk on the Middleham High Moor with our two Norfolk Terriers at 6.15am, before getting back in time to ride out second lot. That’s all my exercise apart from race-riding. 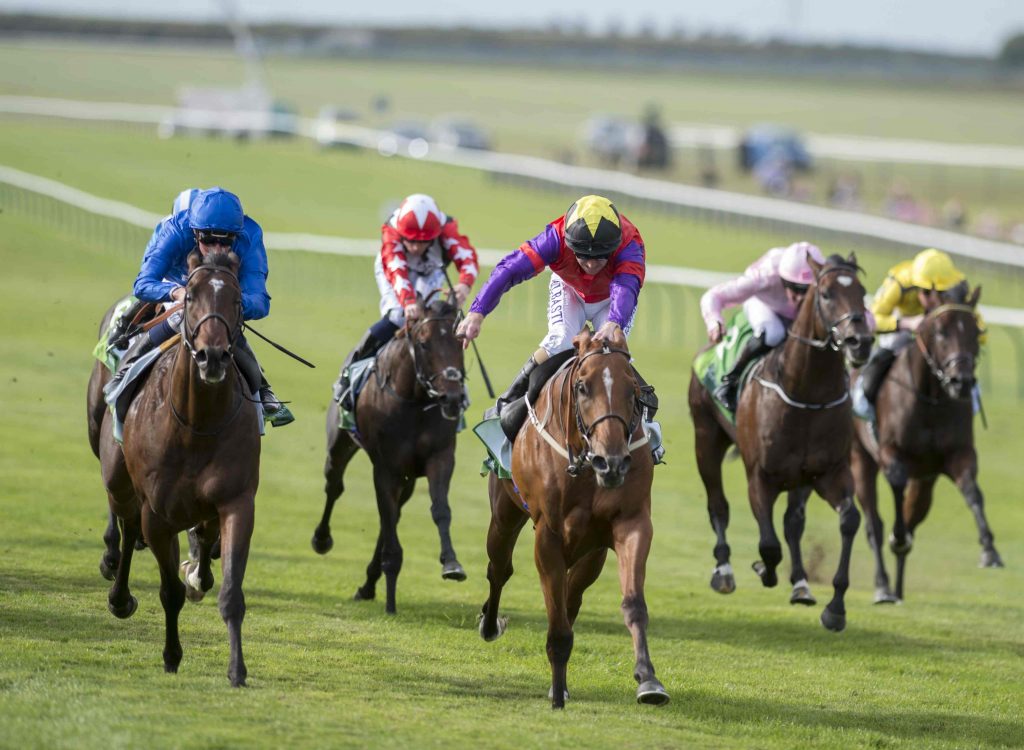 What is the toughest part of being a jockey, and what do you enjoy most?

Definitely the driving and travelling. I drive myself everywhere, except when I can hitch a lift with Mark in his plane. In the last decade I have had four cars, an Audi A6, A7 and two A8s; in that time I have done over 750,000 miles.

That’s an average of over 6,000 miles a month year after year, but that’s the only downside in a great job. Last month I drove a 528-mile round trip in a day to a Bath evening meeting, but I did ride a winner there and that obviously made the homeward journey a lot easier.

It’s those winners that keep you going. I have ridden a winner on every track in Britain and I think probably driven to every one of them as well!

You must have taken enormous pleasure from your second Queen Alexandra Stakes success on the nine years young Oriental Fox at Royal Ascot in June – your only ride of the meeting. What sets him apart and if he’s not your favourite horse, who is?

He has been a good old horse over the years and to win two renewals speaks plenty for him. He’s not very big, but he’s a tough little horse and seems to enjoy his racing.

Also his owner Markus Graff is a proper gentleman and I have been going out to Switzerland to ride for him on and off for the last 18 years. I have won the Swiss Guineas and Swiss St Leger for him.

I have ridden some decent horses but I suppose winning my only Group 1 on The Last Lion puts him right up there among my favourites, alongside Oriental Fox.

There is a quite a difference between the Yorkshire Flat racegoers and those in the south; the Yorkshire courses always seem to be busy with enthusiasts who are interested in the horses

As a northern-based jockey riding so much in the south, are you aware of a north-south divide in the sport?

There is a quite a difference between the Yorkshire Flat racegoers and followers compared with those in the south, and on the London tracks in particular.

The Yorkshire courses always seem to be busy with racing enthusiasts who are interested in the horses, and not just the betting. Perhaps they are more horse orientated than in other parts of the country, I don’t know.

Also when you’re racing in the south there does not seem to be so much evidence of what’s happening in the north, whereas the northern courses make live action from the south available on their screens.

At 46, what keeps the Fanning engine ticking?

Making a decent living from a job I enjoy. I realise I am in a good place and that riding winners regularly is what all jockeys are about. I passed the 2,200 winners mark in Britain last month.

I am sure we all feel you have to be riding winners to keep going and it’s the prospect of that next winner that drives you on.

I am on the job most of the year, though my wife Sarah and I do go away for a couple of weeks’ sunshine in December. It’s working in racing that fulfils me and I accept I am lucky to be doing it.

You are riding against jockeys more than half your age. Do you feel as confident and strong as you did ten years ago and how long can you continue to ride for?

Yes, absolutely, I do. I’ll be riding out and keeping fit for as long as I can. I know I’m blessed with my weight and not having to keep checking it and worrying about those extra pounds.

I feel I am able to cope with the disciplines of race-riding as well as ever and look forward to continuing to do so in the foreseeable future.

Of all the jockeys you have ridden against, who has been your toughest opponent in the saddle, and why?

Kieren Fallon, when he was based in the north and riding for Jimmy FitzGerald and the Ramsdens. When Kieren was on top of his game he was the toughest to compete against in a finish.

There are plenty of tip-top jockeys out there but Kieren at his best was very, very good and always so hard to get by at the line.

Where would you like to be in five years time? Training, perhaps?

I will be 51 and I’d like to think I will still be riding, as long as I am fit and well. But definitely not training! 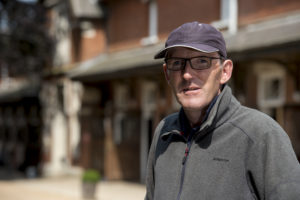 Up Next
Training in the shadow of giants