No Gold Cup for Coneygree

It has been revealed that Coneygree, hero of the 2015 edition of the Cheltenham Gold Cup, will not be entered in this year’s renewal as he has not recovered from his injury picked up over Christmas.

The son of Karinga Bay became the first novice since Captain Christy in 1974 to win the three mile and two-and-a-half furlong contest.

That day he made all the running in the hands of Nico de Boinville, fending off the challenge of the Willie Mullins-trained Djakadam on the running.

After a successful return at Sandown in a Listed Chase in November 2015, he then picked up a hock injury a month later which ruled him out for a repeat bid at his Gold Cup crown.

He made his eagerly anticipated return this season in the Betfair Chase last November when tasting his first defeat over fences at the hands of Cue Card.

The setback which caused him to miss the King George VI Chase now means an attempt to regain his title is now off the cards.

“I’m afraid it’s not going to happen, which is a real shame. When you have a horse like this you must not take any risks and there is no point going there half-baked,” said Sarah Bradstock, assistant and wife of trainer Mark.

She added: ” He has just niggled the bone, where the cannon bone meets the knee. He is still walking at the moment, but we must not take a risk as these niggling things can turn into fractures. We will not rush him and we will make sure he is fine before he comes back.

I’m afraid it’s not going to happen, which is a real shame

“We might just give him a change of scenery and run him in the French Champion Hurdle, which is over three miles and is usually run on soft ground. He might possibly make Aintree, but only time will tell.”

On the back of this there has been a further shake-up in the betting for the Timico Cheltenham Gold Cup which will take place on March 17.

Colin Tizzard has three of the first four in the betting with Thistlecrack around an even money favourite and Hennessy and Welsh National winner Native River next best at 6/1. 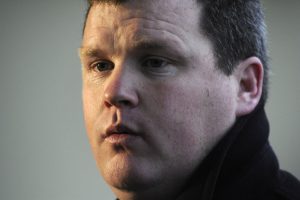