No festival for Geraghty

Two-time Irish champion jockey, Barry Geraghty, will miss next month’s Cheltenham Festival after suffering a collapsed lung and six broken ribs from a fall at Kempton.

Geraghty, 37, was partnering one of the ante-post favourites for the Triumph Hurdle, Charli Parcs in the Grade 2 Adonis Juvenile Hurdle on Saturday.

After coming under pressure, the four-year-old gelding dived at the second last coming down and leaving Geraghty stricken on the turf.

He was subsequently taken to hospital where it was revealed he had suffered multiple chest injuries which mean that he would be ruled out of the Cheltenham Festival just under three weeks away.

Speaking on the At The Races website, Geraghty said: “I’ve a collapsed lung and six broken ribs on my right side. I’m obviously devastated to miss the Festival – there were so many good horses to look forward to as JP’s (McManus) team all look in particularly good shape this year.

“Last night was pretty rough. I’ve broken ribs individually before but never had six go all at the same time. I’ll be in hospital for a few more days but once the lung improves my recovery should be straightforward and I expect to be back for Aintree.”

In a glittering career already, Geraghty has so far ridden 34 Cheltenham Festival winners.

They include two Cheltenham Gold Cup wins with Kicking King and Bobs Worth and five Queen Mother Champion Chases. Of those wins Moscow Flyer and Sprinter Sacre spring to mind as the most spectacular.

JP McManus looks to have a very strong hand at this year’s Festival and Geraghty will be missing some well fancied rides.

In the Champion Hurdle alone on the first day he would of had the choice between two of the favourites, Buveur D’air or the Alan King-trained Yanworth.

He will also miss the ride on ante post favourite for the Stayers’ Hurdle Uknowhatimeanharry, who will be looking to give his trainer Harry Fry a second success on jump racing’s biggest stage. 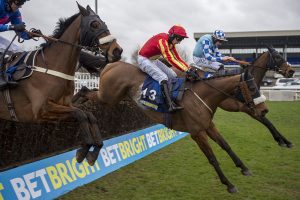 Up Next
Pilgrims Bay last to first in BetBright