A son of Night Of Thunder topped a vibrant first day of the Goffs UK Premier Sale in Doncaster on Tuesday, selling for £230,000 to Mark McStay on behalf of an existing client.

The chat on the grounds leading up to the sale suggested that Doncaster had stayed true to the essence of the sale by compiling a catalogue of sharp, racy types – in other words, a typical ‘Donny type’ – and with sire power also on their side, the company was able to celebrate an excellent opening session of trade that featured rises across-the-board and a 91% clearance rate.

“It’s been a very competitive day,” said agent Ross Doyle. “It’s very strong, which is great to see. I’ve never seen so many people here, and that’s a testament to Goffs, its team and the horses here. There are plenty of very good horses here today and it’s the same tomorrow.”

The sale of the £230,000 Night Of Thunder colt continued a momentous run for vendor Noel O’Callaghan of Mountarmstrong Stud, who hit the high notes at York last week as the breeder of Lowther Stakes heroine Swingalong.

That daughter of Showcasing hails from a family that is relatively new to the Tipperary-based outfit. The Night Of Thunder colt, on the other hand, represents the essence of Mountarmstrong as a direct descendant of foundation mare Sandhurst Goddess; in fact, the stud has bred most of the winners on the page, among them the Queen Mary Stakes heroine Anthem Alexander and successful sire Dandy Man, both of whom are half-siblings to the colt’s winning dam Pious Alexander.

One of only two catalogued by his popular sire, the colt swiftly became the subject of a heated duel between Ed Sackville, standing with the John Dance team, and agent Mark McStay, with the former ultimately coming out on top at £230,000.

“He’s a lovely colt, the standout for me of the sale today,” said McStay. “Night Of Thunder at this stage is truly proven and they’re not going to get any cheaper by him – we’ve all seen what he can do. And this colt to me had a real look of Dubawi to him.

“He’s for an existing client. He had a figure and we had to stretch and be brave to secure him, and I’m very glad we did.”

Not long after, McStay also signed at £120,000 for a Kuroshio colt from WH Bloodstock. A half-brother to two winners and out of a half-sister to Italian champion Danehurst, he had been pinhooked for just €38,000 as a Goffs February short yearling. 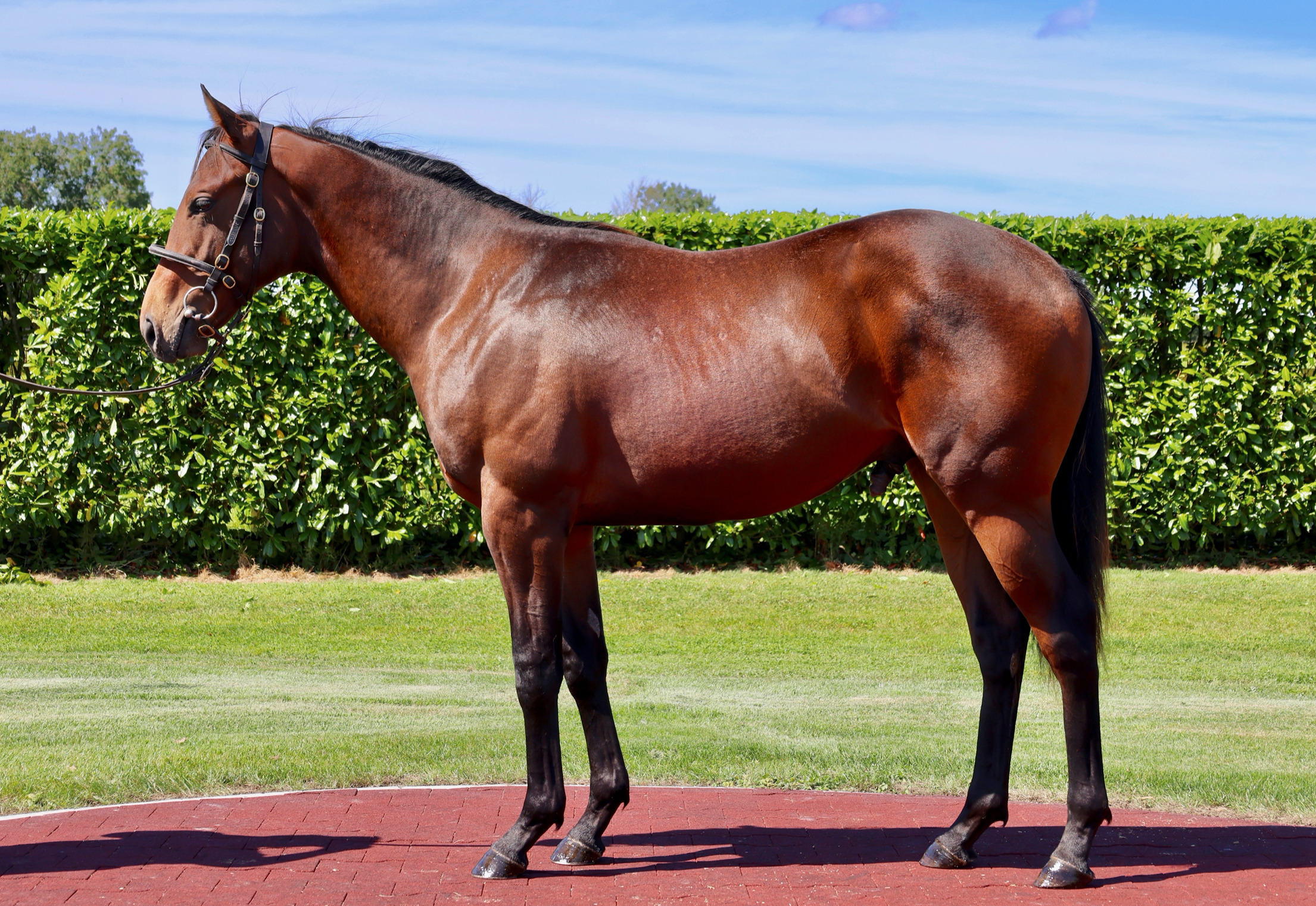 Mark McStay signed at £230,000 for this Night Of Thunder colt. Photo -Goffs UK

Rathbarry Stud stalwart Acclamation maybe in the veteran stage of his career nowadays but he continues to remain as successful as ever on an international scale, including in Hong Kong where his performers currently include the Queen Elizabeth II Cup winner Romantic Warrior.

As such, the Hong Kong Jockey Club will be hopeful that their latest acquisition by the sire, a £200,000 colt out of Isola Canarie, will catch the imagination when he comes to be re-offered at the organisation’s breeze-up sale in 2024.

“Acclamation has had a champion out there this year and this colt is a similar type,” commented the Hong Kong Jockey Club’s Mick Kinane. “He’s a nice horse. I’ve been here for each of the past two years and I think the horses are better this year.

“We’ll get him back, send him into pre-training, see what we have and go from there.”

Vendor Trinity Park Stud knows what it takes to hit a high point in the Doncaster ring, especially when it comes to Acclamation, having sold a daughter of the sire for £185,000 at this sale to Joe Foley in 2018.

However, this latest result, achieved on behalf of breeder Peter Gleeson, provided a landmark high for the Berkshire-based operation.

“I thought we had a very nice horse but I wasn’t expecting that,” said the stud’s Becky Marsh. “I said to Henry Beeby this morning when he came to look at the horse before he auctioned him that I would be delighted if he made £100,000. Obviously I’m overwhelmed.

“We foaled and raised this yearling – he’s been with us since day one and he’s always shown a lot of class. Since he came here he’s not put a foot wrong. He’s walked out perfectly every day and he had the right people on him.”

Irish-bred Isole Canarie was a smart performer in Italy whose three victories included a pair of Listed races. The daughter of Rip Van Winkle, a relation to Ballysax Stakes winner Puncher Clynch, was purchased during her racing career by Gleeson and the Acclamation colt is her second foal following a Shalaa gelding.

“Isole Canarie was bought by Peter Gleeson, who raced her in Italy and then France, then brought her back here to breed,” said Marsh. “He’s been lucky with Italian mares before and it’s worked really well for him. The mare has an Oasis Dream colt at foot, but was not bred back this year.”

Ross Doyle, meanwhile, went to £200,000 to secure the only New Bay on offer during the day, a colt out of Australian Listed winner Rubira sold by Baroda Stud on behalf of the Applecross Syndicate.

“We were very keen to get him,” said Doyle, standing alongside Richard Hannon. “Obviously he’s by a sire doing extremely well and he’s out of a black-type mare. We put him down as the best colt of the day movement wise, it’s all very natural for him.”

Alice Fitzgerald tends to head to Doncaster with a select draft but it invariably contains a smart type or two, as illustrated again this year in the sale of a homebred Kodiac colt for £160,000.

Out of a half-sister to Princess Margaret Stakes winner Princess Noor, herself a Doncaster graduate, the colt will join the burgeoning operation of James Horton at John Dance’s Manor House Farm following his sale to Ed Sackville.

“He’s a really, good, strong colt by a brilliant two-year-old sire – if you want a Royal Ascot runner, then Kodiac is a safe place to start,” said Sackville. “He’s come from a very good farm – he’s been prepared extremely well.

“It’s a really, good deep page and Kodiac has worked with the family before – [Group 1 winner] Fairyland is under the third dam.”

On what turned out to be a busy day for the John Dance team, they also went to £150,000 for a first-crop daughter of Coolmore’s Ten Sovereigns, sold by Manister House Stud on behalf of RJB Bloodstock, and the same figure for the Ulysses half-brother to Coventry Stakes winner Bradsell sold by Bearstone Stud on behalf of Deborah O’Brien.

It was also a productive day for Kodiac’s base of Tally-Ho Stud thanks to two six-figure sales that represented a fusion of the established and the future.

As ever, the stud’s leading young sire Mehmas was in demand, with a homebred colt out of the Ishiguru mare Ishimagic selling for £130,000 to Hugo Palmer, again through agent Ed Sackville.

Of equal satisfaction to the farm, however, is likely to be the warm reception received by Tally-Ho’s first crop sire Inns Of Court. Well represented at this sale, the Group 2-winning son of Invincible Spirit fired in an average of £40,555 for 11 sold, among them a homebred colt out of the winning Slade Power mare Key To Power who made £125,000 to Robson Aguiar and Amo Racing.

“He’s a nice horse by a promising first-crop sire,” said Aguiar. “He looks nice and precocious. He’ll come back to me for pre-training and we’ll see how he gets on. For me he was the best physical in the sale.”

@SackvilleDonald Ed Sackville lands this smart Kodiac colt from @fitzgeraldalice for £160,000 on behalf of John Dance @DanceThorobreds. Congrats to all connections!

‘If you want a Royal Ascot runner, Kodiac is a safe place to start’ – Ed Sackville pic.twitter.com/e5S1SRfsaq

Plenty of pinhookers also reaped the rewards of a vibrant day of trading. By the end of play, 42 of those through the ring had sold for a profit (taking into account approximate expenses), among them a first-crop daughter of Ten Sovereigns who made £110,000 for vendor Jamie Railton having been sourced for €26,000 as a Goffs November foal.

Q-Cross Stables also benefitted from the fine start made by Shadwell’s Tasleet as the vendor of a second-crop son of the stallion who sold for £90,000 to Oliver St Lawrence, an agent well aware of the capabilities of his sire as the purchaser of his high-class son Bradsell prior to his Royal Ascot victory. The colt, a half-brother to the stakes-placed Sweet Believer, had cost AK Bloodstock just 14,000gns as a Tattersalls December foal.

Some promising results undoubtedly also aided the cause of a Cracksman colt from Houghton Bloodstock, who blossomed from a 17,000gns foal into a £90,000 yearling to Ted Durcan.

The sale continues on Wednesday at 10am. 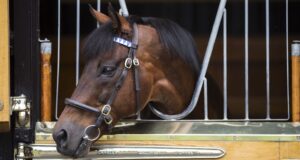