Bjorn Nielsen is hopeful of his superstar Stradivarius adding a third Group 1 Goodwood Cup on the opening day of the Qatar Goodwood Festival but admits he is wary of some up-and-coming rivals in the two-mile contest.

Stradivarius will face seven opponents on Tuesday including Dee Ex Bee and Cross Counter, who finished second and fourth behind the five-year-old in last month’s Gold Cup at Royal Ascot.

Nielsen said: “Stradivarius has done so much for me already that I go there hoping he’s going to win. But he’s running against some very good horses that were right there with him at Ascot, so he’s going to have to beat them again and it won’t be an easy task.

“All of the other runners are a danger to him. The three-year-olds are getting so much weight and the horses he ran against at Ascot like Dee Ex Bee and Cross Counter, who I have huge respect for, are very, very good horses.”

A homebred for Nielsen by Sea The Stars out of the Bering mare Private Life, Stradivarius comes into the Goodwood Cup off an uninterrupted campaign compared to 2018, when he had to recover from a slight injury sustained in the first of his Gold Cup successes.

Nielsen said: “He’s come out of this year’s Royal Ascot much better than he did last year. He was slightly lame for a second afterwards as his shoe was taken off and stood on his toe clip.

“Stradivarius has got a great heart and a great mind; that’s why he is what he is. Hopefully he can keep that for the rest of his five-year-old season and maybe into next year.”

If Stradivarius were to be successful in tomorrow’s race, he would join Mark Johnston’s Double Trigger in capturing three editions of the contest.

The Goodwood Cup is the showpiece on the first day of the five-day Qatar Goodwood Festival and Tuesday’s card also features the Group 2 Qatar Vintage Stakes, where King Power Racing’s Mystery Power faces off against Godolphin’s exciting Pinatubo.

Pinatubo enhanced his reputation further at Royal Ascot last month when he bounded clear of Lope Y Fernandez in the Listed Chesham Stakes, while Mystery Power was an authoritative winner of the Group 2 Superlative Stakes at Newmarket earlier this month.

Goodwood’s opening day will also see the Group 2 Qatar Lennox Stakes run over seven furlongs and the field includes the 2017 victor Breton Rock. Trained by David Simcock, the nine-year-old was a surprise 50-1 winner when he took the scalp of Home Of The Brave and Limato two years ago.

Nine other horses will line-up in the race including last month’s Group 3 Jersey Stakes scorer Space Traveller and the Sir Michael Stoute-trained Zaaki, who could be a major player if he handles the drop down from a mile. 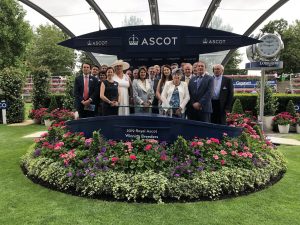 Up Next
Royal Ascot-winning breeders celebrated