A phenomenal three days of trade for Hertfordshire nursery Newsells Park Stud continued on the final day of Book 1 when its Galileo filly out of Giant’s Play was bought by Stroud Coleman Bloodstock on behalf of Godolphin for 1,200,000gns.

The daughter of Dubawi became the first millionaire yearling to go through the ring at Tattersalls on Thursday. She is out of the Grade 2-winning Giant’s Causeway mare Giants Play, making her a full sister to the Group 3-placed Ispolini and a half-sister to the Listed third Playful Sound.

That result cemented Newsells’ position as leading consignor for the auction, having sold a total of 18 lots for an average of 614,167gns and an aggregate of 11,055,000gns – those impressive figures containing four million-guinea lots.

Julian Dollar, General Manager of the operation, said: “We’ve been very lucky and have no complaints. I said before that we felt that we’d brought the nicest bunch of horses we’ve ever brought to the sale.

“It’s been very gratifying and humbling to see that other people seem to share our opinions. It’s a great tribute to the team at home who do such a wonderful job.”

Stroud Coleman acting on behalf of Godolphin were on the mark again later when delving into Barronstown Stud’s draft at 1.2 million guineas for the Galileo half-sister to dual Group 2 scorer Ivawood.

The filly is out of the winning Red Ransom mare Keenes Royale, herself a half-sister to Royal Lodge winner Berkshire and out of the Group 1 heroine Kinnaird. The further family includes John Dance’s tough filly Laurens.

David Nagle of Barronstown Stud said: “She’s a lovely filly. Very athletic and racey, we liked her a lot. 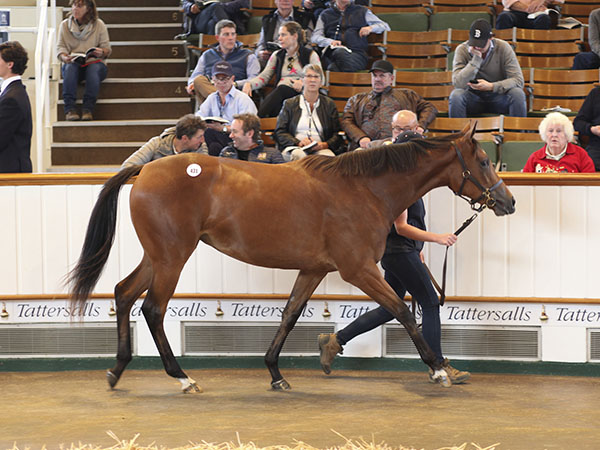 The half-sister to Ivawood selling for 1.2 million guineas on Thursday – Photo: www.tattersalls.com

“Hopefully she will be lucky for her new connections. Keenes Royale had a Galileo filly this year and is back in foal to him.”

Other notable Stroud Coleman purchases on Thursday included a 900,000gns Sea The Stars colt whose second dam is German mare Elle Danzig, a 850,000gns Dubawi colt who is the first foal out of the Group 3-winning J Wonder, a 700,000gns Galileo daughter out of Laugh Out Loud and a 650,000gns daughter of Sea The Stars.

Just ten lots from the end of the sale, Shadwell were back in the mix when going to 900,000gns for the Meon Valley Stud-consigned Invincible Spirit colt out of the unraced Montjeu mare Monzza, herself a half-sister to Meon’s Group 1 winner Izzi Top.

Shadwell are no strangers to buying from the respected Hampshire nursery having gone to 2.6 million guineas here in 2016 for Emaraaty, a son of Dubawi who has since won twice for John Gosden.

Angus Gold of Shadwell said: “A late flourish! He’s a very well-bred horse, by a very good stallion and from a fantastic family. We bought Emaraaty from them a couple of years ago who has plenty of ability, he slightly declined to show it the last couple of times.

“He’s had a nice break and has just touched down in America. In terms of talent he is a good horse and I believe he’s going to be trained by Chad Brown.”

Of the new purchase, Gold added: “He wasn’t a sharp Invincible Spirit, which would be expected with his pedigree, but he showed himself very well here and Sheikh Hamdan liked him a lot.”

Newmarket trainer Roger Varian appeared ringside when Barronstown Stud’s Frankel three-parts brother to champion older miler Rip Van Winkle came on the market and he had the final say when going to 850,000gns for the colt.

Frankel recently celebrated his fifth top-level winner thanks to Call The Wind’s victory in the Prix du Cadran at Longchamp last week, and the Banstead Manor Stud resident has gone from strength to strength since his progeny hit the track. 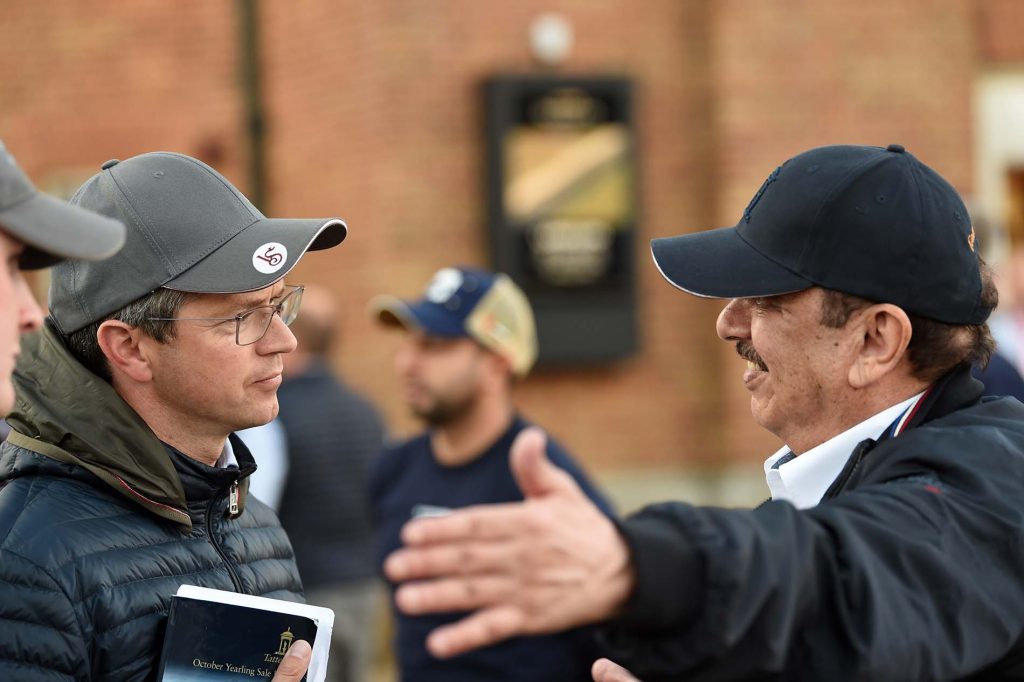 Of his purchase, bought on behalf of Sheikh Obaid, Varian said: “He’s a strong horse who looks like he can motor.

“Frankel is still a young sire and doing well, and this horse is a close relation to a Group 1 winner.”

Kevin Ryan received a big boost to his Hambleton yard on Thursday when he was announced as the trainer of the Galileo half-brother to Derby and Prix de l’Arc de Triomphe hero Golden Horn, after agent Stephen Hillen, acting on behalf of Sheikh Mohammed Obaid, went to 450,000gns to secure the colt at Book 1.

Ryan has one other horse for Sheikh Obaid in his string, the Gimcrack Stakes winner Emaraaty Ana, who was purchased prior to taking on Ten Sovereigns in the Middle Park Stakes. 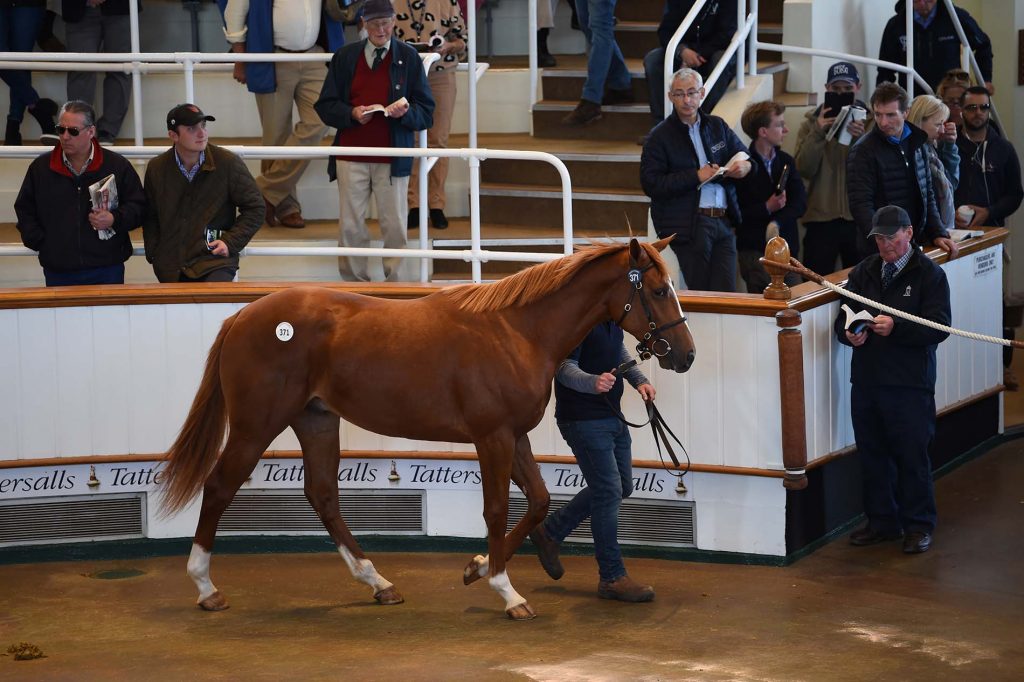 The Galileo half-brother to Golden Horn who will be trained by Kevin Ryan – Photo: George Selwyn

Hillen said: “I thought he’d make more. He’s a solid looking type who takes his work but is a nice horse and by Galileo.”

Consigned by his breeders Norelands Stud, the flashy chestnut is out of the unraced Dubai Destination mare Fleche D’Or and a half-brother to the Listed-winning and Grade 2-placed Champs Elysees mare Eastern Belle. 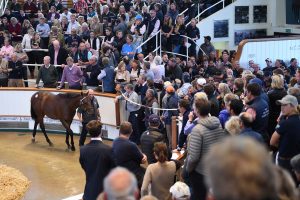 Up Next
Qatar Racing grab Too Darn Hot's brother