The BHA will launch a new Racing Administration website next spring

A brand new digital system for the administration and registration of owners will be introduced next spring, as part of a package to simplify and modernise the current system of racehorse ownership.

Announced earlier this week by the BHA, these reforms come on the back of feedback obtained from the ROA, who published results of a National Racehorse Owners Survey recently.

It has been widely acknowledged that the current system of administration has been a source of frustration for owners for some time.

The new Racing Administration website will be an online hub supported by a telephone helpdesk, and will allow owners to register and maintain their ownership digitally, removing the majority of paper based forms. Owners will also be able to set up sponsorships, register an authority to act and check and pay invoices all online.

Richard Wayman, Chief Operating Officer for the BHA, believes the reforms are an important step on the path to ensuring racehorse ownership is more attractive and accessible to both new and existing owners.

He continued: “Looking further ahead we would like to get to a position where the administrative costs of ownership are greatly reduced. As we explore how that might be delivered, the changes announced today will address many of the administrative frustrations our consultation told us have been faced by owners for too long.”

In terms of structure, the eight different types of ownership will be reduced to just five; sole, partnership, syndicate, racing club and company.

Under the current system, fees for an authority to act, VAT and the registration and re-registration of colours are charged at different times during the year. All of these will be consolidated under the new system into just one date in the year, with the actual process of fee alignment taking place throughout 2017.

Investment in these reforms is very much welcomed

New owners will also be able to purchase ‘fee bundles’ at the registration stage in order to minimise any additional admin.

These reforms will build on the aims of the Industry’s Strategy for Growth, whose overarching principle is to grow racehorse ownership with particular emphasis on attracting new owners.

“Given owners are the single biggest contributors to racing, investment in these reforms is very much welcomed,” said Charlie Liverton, Chief Executive of the ROA.

“Owners have long-complained that their first steps on the road to ownership were characterised by red tape and confusing ownership structures followed by numerous fees. The ROA is delighted that the planned reforms will greatly reduce these hurdles, ensuring that both existing and new owners can concentrate on the more enjoyable aspects of our thrilling sport,” he added. 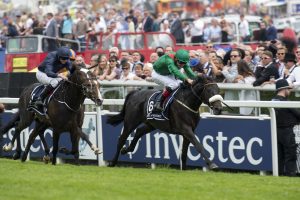 Up Next
Dual Derby hero retired to stud