Godolphin have announced the signing of two new stable jockeys for 2015, with James Doyle set to be first rider for Saeed Bin Suroor and William Buick joining Charlie Appleby’s stable at Moulton Paddocks.

Doyle stands down from an 18-month tenure with Prince Khalid Abdullah’s Juddmonte operation, during which time he was most notably associated with four-time Group 1 winner Kingman, while Buick will end his five-year retainer with John Gosden’s powerful Newmarket stable.

Silvestre de Sousa will no longer under contract for Godolphin but former Newmarket-based jockey Mickael Barzalona, who returned to France earlier this year, will continue to ride for the organisation in his native country.
In a further change to the operation for 2015, horses trained by Joh Gosden which formerly carried Princess Haya’s green-and-black silks will in future race in the royal blue of Godolphin.

Commenting on his new role for Sheikh Mohammed’s stable, James Doyle said: “I have had a wonderful season riding for Juddmonte and Prince Khalid during which I was fortunate to ride the best horse of my career so far in Kingman. Noble Mission was another great racehorse produced by Juddmonte that helped bring my career forward. I shall always be eternally grateful for that one-year contract which leaves me with great memories. Now I look forward to sharing riding duties with William at Godolphin and continuing to achieve great things in the world of horse racing.”

His new colleague William Buick added: “I have been very fortunate to have been employed by John Gosden since I completed my apprenticeship and without his faith and wise counsel I would not be in the position that I am in today to take what is, in my opinion, the most coveted position in world racing. John has shown me great loyalty and given me access to Classic winners and success on a world stage. No jockey has had a better mentor. Now I am looking forward to sharing the Godolphin riding arrangements with my very good friend James. Both of us have had to make hard decisions but no one has made a commitment to world racing like Sheikh Mohammed and it is an honour for both of us to be invited to be a part of his team.”

Speaking on behalf of Godolphin, Sheikh Mohammed’s bloodstock advisor John Ferguson said: “Sheikh Mohammed has always respected both William and James and when their availability was confirmed at the end of this season he was keen to secure their services for the future. I think this is yet another clear indication of Godolphin’s continued pursuit of excellence in both horses and humans.” 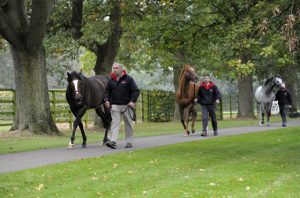 Up Next
A Pivotal Role