The launch of the Dubai Breeze-Up Sale, a boutique auction of 69 two-year-olds at Meydan later this month, marks another milestone for Goffs

The Goffs Group has a proud tradition of selling horses all over the world, with the Doncaster team having held sales in such far-flung locations as Hong Kong, Italy, Qatar and Sweden, and the Irish arm finally achieving the industry’s long-held ambition of conducting an auction in London.

The company is breaking new ground on the international stage once again, with the launch of the Dubai Breeze-Up Sale in association with Goffs at Meydan Racecourse on Wednesday, March 23.

The sale, restricted to a maximum of 69 two-year-olds that will have been sourced from British and Irish vendors by Goffs, is the brainchild of the firm’s international client relations consultant Tom Taaffe.

He says: “I was on a promotional trip to Dubai when I got talking with the trainer Salem bin Ghadayer, who would be a good friend of mine and is very well respected by His Highness Sheikh Mohammed and Sheikh Rashid bin Dalmook Al Maktoum, the Chairman of Dubai Racing Club.

“I thought I’d throw the idea of holding a sale in Dubai out here, and see how it went down, and Salem was very interested and so we discussed how  it might work for several more evenings. Sheikh Mohammed and Sheikh Rashid embraced the idea and drove the project from there, and it was they who said it should become an international event.”

The first sale of it’s kind in Dubai

The sale, the first of its kind in Dubai, is a breeze-up by name but won’t resemble a modern European breeze-up sale in nature. The lots will have undergone a full veterinary examination before travel at the expense of the Dubai Racing Club, in order to increase buyer confidence, and they will be shown off on the Tapeta training track at Meydan. Moreover, timing will not be everything.

“This will be the first time that raw material for racing has been sold in Dubai,” continues Taaffe. “I know breeze-up horses aren’t strictly raw material, but they’re pretty close. Our intention is to have the horses just swing away on the bridle in a three-quarter breeze, not being revved up to stop the clock at nine or ten seconds for a furlong. There’ll be no timing and no stride pattern figures, it’ll be all about natural horses with raw ability that the buyer can harness themselves in the future.

“We want prospective purchasers to be able to see that the horses can move well, and that they have the conformation and physique to match their pedigrees. The focus will be on providing sustainable horses that will be able to train on over many seasons, at all levels of ability.

It’s a completely different market to what we know

“There isn’t the same obsession with fast and precocious two-year-olds in the Middle East, they’re more into horses that have longevity. Any horses that are bought to remain down there will likely be given down time to acclimatise for a few months before going into pretraining, and they probably won’t be running until November at the earliest. It’s a completely different market to what we know.”

The catalogue will comprise a mixture of turf and dirt horses, to reflect the racing opportunities in the sale’s primary market of the Middle East. 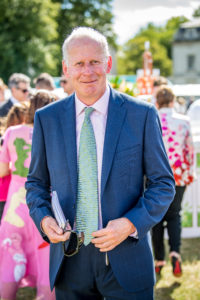 Tom Taaffe: “The focus will be on providing sustainable horses”.  Photo – Goffs

“It’ll be pretty much half and half,” says Taaffe. “It’s worth remembering that there isn’t such a big distinction between dirt and turf in those countries, as they have both surfaces and horses often switch between the two. Many of our vendors will be able to answer the call for dirt horses as they will have sourced yearlings in the US with this sale in mind.”

Not that Middle-Eastern buyers are expected to be the only participants at the new Dubai World Cup Breeze-Up Sale. With much of the racing world converging on Meydan that week, including those from the US, Asia and Russia, it promises to be a cosmopolitan buyers’ bench.

“Dubai is the same as any other country with its own quarantine rules, but once the horses are through that they can go anywhere,” says Taaffe. “I know a few British and Irish trainers have told me they’re going to go along and see if they can buy something.

“It is the Middle East buyers that we’re mainly targeting, though, as it’s a market that is growing massively. Nobody needs me to remind them how many horsemen from those countries come to Britain and Ireland to buy, and how many horses they go back home with.

“The Gulf Cooperation Council countries’ racing associations have recently got together to agree on a much more cohesive racing programme, with each jurisdiction staging meetings that better complement the others’, so there’s firmer foundations for the future of the sport there, and it’s exciting to be a part of that.”

The sale is receiving a considerable boost in its early years, with Sheikh Mohammed and his nephew Sheikh Rashid getting behind it as another way in which to raise Dubai’s profile internationally.

“Sheikh Mohammed wants to make a statement to the world that Dubai can hold an elite sale of untried horses who will go on to be successful, and over the coming years the sale will attract more foreign investment not just from the GCC countries but from further afield too,” says Taaffe. “It’s all part of maintaining Dubai’s position as a world leader in racing.

“You shouldn’t underestimate how much they love welcoming people to their country and making new relationships, either. It’s a big thing for them, and this promises to create all sorts of new opportunities for them.

“Sheikh Mohammed has been very good in agreeing to pay for the vendors’ airfares to Dubai, and covering staffing costs while they’re down there. They wouldn’t get that at any other sale, and it just goes to show how enthusiastic Dubai is about getting the sale off the ground.”

Preparations for the inaugural Dubai Breeze-Up Sale have made for a very different March for Taaffe. Until he called time on his training career in early 2021, he had spent the previous 27 years putting the finishing touches to his Cheltenham Festival squad this month.

The hard work was not in vain, of course, as he sent out the great Kicking King to win the Cheltenham Gold Cup in 2005 and notched notable handicap victories at the Festival with Finger Onthe Pulse and Ninetieth Minute.

“I made the decision to stop training as I wanted to devote more time to projects in the bloodstock industry that I had taken on,” says Taaffe. “I’m very happy to be an owner now, and I’m still breeding away, so it’s not as if I’ve been cast into the wilderness!

I’ll still take a keen interest in the Festival,

“I’ll still take a keen interest in the Festival, of course. I always will: it’s the biggest event in jump racing and just a fantastic spectacle. My son Pat is riding now, combining that with attending college, and he’s had a few winners, which is good.”

Like his flagship horse Kicking King, a runner-up in the Supreme Novices’ Hurdle and Arkle Chase before his victory in the meeting’s Blue Riband, Taaffe is showing remarkable versatility by excelling in his new role as an international sale coordinator.

“It’s a challenge, no doubt, but I love taking on new challenges,” he says. “This project is exciting because I really think it’s going to work.

“Goffs have put a lot of hard work and effort into it, and our enthusiasm is being matched in Dubai. It’s a world away from preparing horses for the Cheltenham Festival, but life changes and you move on and adapt.” 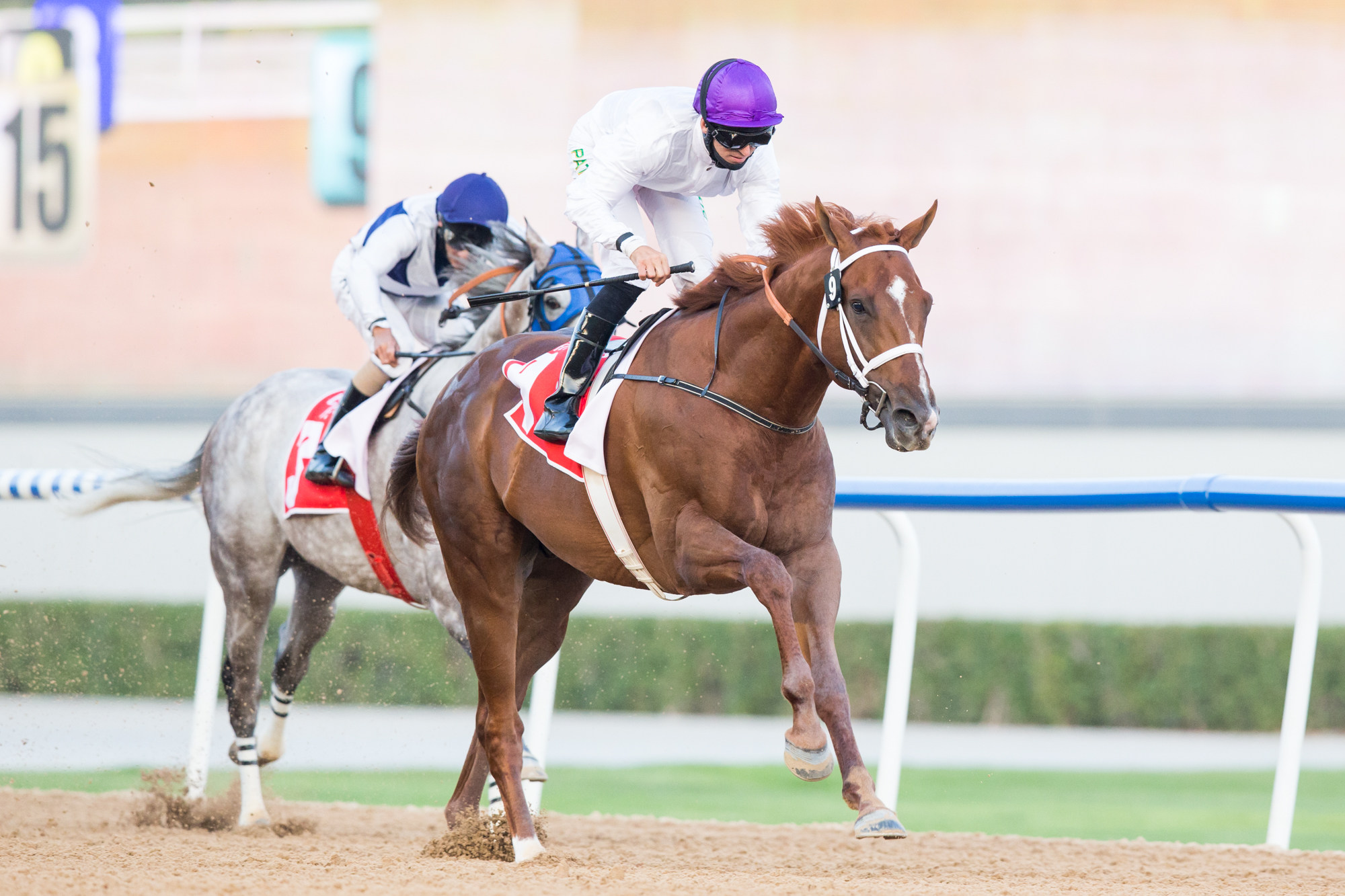 Midnight Sands: Burj Nahaar hero is one of many high-profile breezers running in Dubai

On the breeze-up trail for future stars

The European breeze-up season kicks off on April 11 with the three-day Tattersalls Craven Breeze-Up Sale in Newmarket, which can claim quite the flagbearer: no less than last year’s unbeaten champion two-year-old Native Trail, who was sold by Oak Tree Farm to Godolphin for 210,000gns.

Mystery Angel provides a fine advert for the versatile talents and bargains available there. The daughter of Kodi Bear was bought by Nick Bradley from the Hyde Park Stud draft for only 22,000gns, and after winning the Pretty Polly Stakes and running second in the Oaks last year, she was sold to Haruya Yoshida for 500,000gns at the Tattersalls December Mares’ Sale.

Tattersalls is once again offering lucrative bonuses for Craven Breeze- Up Sale graduates – £125,000 each to the first winner of a Royal Ascot two-year-old race and a European Group 1 juvenile heat, and £15,000 for those who score in certain maiden and novice races.

The breeze-up bandwagon rolls into Doncaster for the Goffs UK Breeze-Up Sale from April 19 to 21. It was there last year that Blandford Bloodstock gave £110,000 for an Ardad colt from Tally-Ho Stud who would become Norfolk Stakes, Prix Morny and Middle Park Stakes winner Perfect Power. Light Infantry and Twilight Jet were among the other top-class two-year-old talents sourced in South Yorkshire that week.

It’s back to Newmarket for the Tattersalls Guineas Breeze-Up Sale from April 26 to 28. Prices are usually a little lower here, but the standard of horse on offer is still high – as proven by recent Group or Grade 1-winning graduates Shantisara (cost 10,000gns) and Trueshan (31,000gns).

Arqana, scheduled for May 12 and 13 in Deauville, has become one of the most boutique sales anywhere in the world. Accordingly, buyers have to  pay a pretty penny for the best prospects, as shown by the fact Godolphin had to go to €800,000 for Rizeena’s Kingman half-sister Summer Romance, now a Dubai Group 2 winner and twice a Grade 1 runner-up in the US, when she was offered by Mocklershill in 2019.

That doesn’t mean some good ones don’t slip through the net, though, as Simone Brogi managed to get the future American Grade 1 winner Rockemperor, another Mocklershill breezer, for just €12,000 in 2018.

The Tattersalls Ireland Goresbridge Sale, to be held on May 18 and 19 this year, has also grown considerably in stature. The high-class pair Haqeeqy and Parent’s Prayer were the top two lots at the 2019 renewal, costing €175,000 and €165,000 respectively. 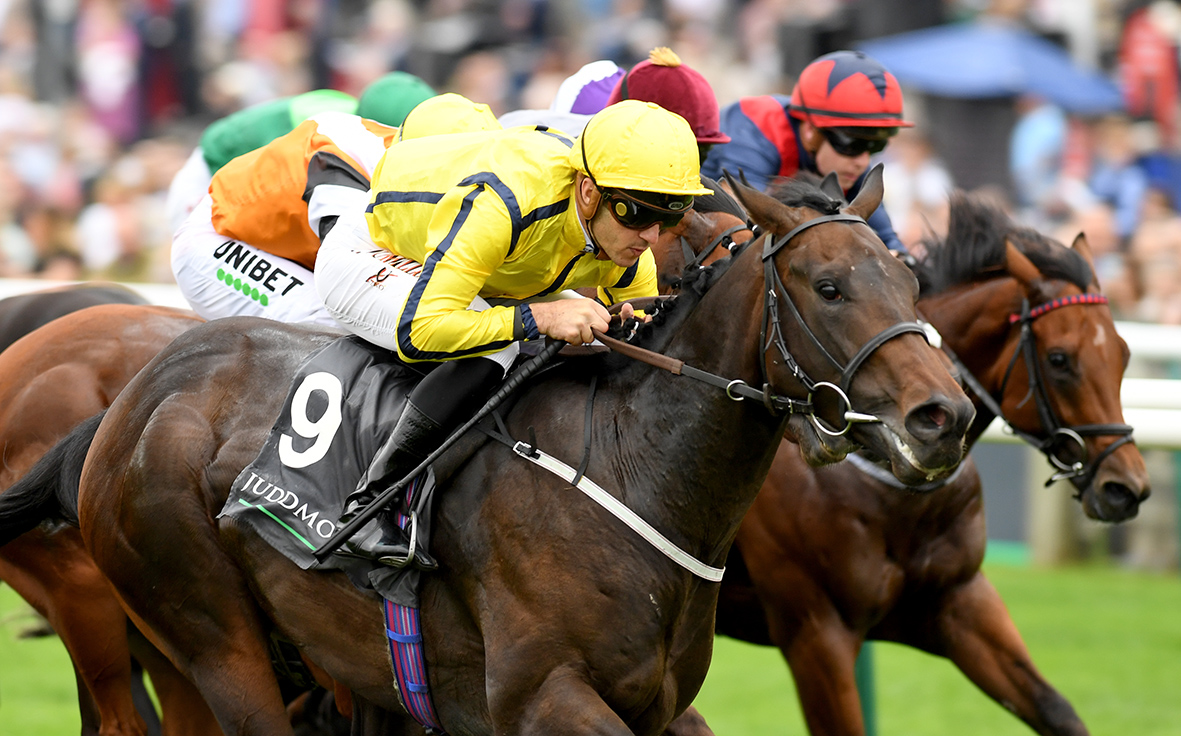 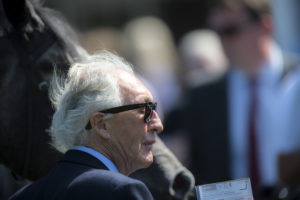