A breath of fresh air
Stories

You will probably be reading this somewhere between your Christmas dinner and New Year celebrations and so I wish you a very happy, healthy and peaceful New Year. This January issue provides a timely opportunity for me to outline the TBA’s activities in 2013.

The 2012 sales season certainly ended on a high note. Foreign buyers dominated with plenty of interest in quality mares, competition was strong at the highest levels. European bloodlines are at a premium at the moment. Ironically, strong breeding stock sales are not yet impacting on the domestic appetite to increase foal production, which continues to decline. The introduction of the British Owners and Breeders Incentive Scheme (BOBIS) is an essential stimulant to domestic production. In the coming weeks the BHA and TBA will be on course to ensure all breeders are aware of the registration process and more information is provided here.

BOBIS will be pivotal in promoting and marketing British bloodstock in 2013, and whilst the BHA seeks to refocus its support towards the marketing of British racing and the sales companies continue to do an excellent job to attract overseas purchasers, closer to home the TBA will be evaluating what we can do to support grass roots marketing, which will see an expansion in our work to promote both the TBA and British breeders.

Dove-tailing into this area will be a closer relationship with the British European Breeders’ Fund, and this will be managed by the new TBA Flat Committee. It is time that the breeding industry’s contribution to sponsorship of British racing brought more return to our members, and we intend to pursue this ambition through closer participation with the BEBF Board of Trustees and with the creation of an influential Flat race sponsorship programme for 2013.

The Flat Committee members will also be charged with closer liaison with the BHA, and their remit will include input into race programming and policy changes to the black-type programme.

A raft of support measures for National Hunt breeders has been well developed by Robert Waley-Cohen and his committee. Ideas gathered from French and Irish breeders, including a French-style foal show and NH breeders’ social event are planned for 2013. Robert will also join the TBA Board meetings as a regular attendee in 2013.

Political lobbying remains one of our priorities in 2013. As the Government struggles with our economy, getting time from our ministers is increasingly difficult. New DEFRA minister, Owen Patterson, is aware of our industry’s concerns. We will continue to highlight in particular the future of the Single Farm Payment eligibility for stud farms, retaining notifiable disease status for CEM and EVA, and the retention of the Tripartite Agreement for the movement of thoroughbreds, as well as the importance of robust disease surveillance measures.

The departure of the BHA’s Director of Equine Science and Welfare will mean that the TBA will need to develop closer relations with DEFRA officials, which we must see as a positive move, despite the additional resource it will require.

My ambitions for 2013 deserve more space than my allotted page here, but I want to stress that employment, education and training matters will also come to the fore as the BHA seeks to introduce and manage a central application for Levy Board funding, which will include the funding allocation to the breeding industry. The TBA will work with our training providers to demonstrate the importance of maintaining this support.

Finally, I would like to thank the team at Stanstead House. Our Chief Executive, Louise Kemble, has a wide brief and a board committed to driving through a number of new initiatives in 2013. With a competent team supporting her, I am sure 2013 will be another productive year for the TBA and I would like to pay tribute to all that they achieve on our behalf. 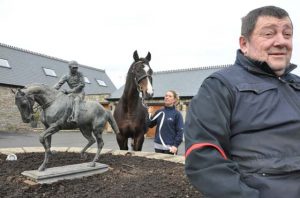 Up Next
A breath of fresh air