From March 2, racehorse owners, breeders and trainers in Britain must comply with new rules regarding the use of anabolic steroids, as part of the British Horseracing Authority’s zero-tolerance drugs policy.

The new rules, which were initially due to be implemented in January, state that a horse cannot receive an anabolic steroid at any point in its life; any horse that is found to have breached this requirement will be face a mandatory ban from training of 12 months and will be ineligible to race for a period of 14 months, dated from the time the breach occurred.

If a horse is tested and it is found to have been administered a prohibited substance, the BHA will pursue the ‘responsible person’ – i.e. the person in charge of the animal at the time – for the violation. Hair testing will be used to identify if a horse has ever been injected with anabolic steroids.

The new rules, which follow last year’s anabolic steroids scandal involving the Godolphin stable, have serious implications for all keepers of thoroughbreds and the BHA has produced extensive guidance notes that can be accessed at www.britishhorseracing.com.

The April issue of Thoroughbred Owner & Breeder will include an in-depth look at the new drug rules and their implications for the British racing and breeding industry. 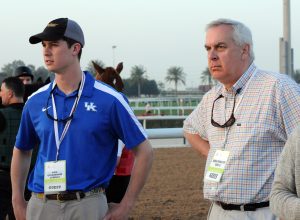 Up Next
David Cameron visits Newmarket