Godolphin and Charlie Appleby enjoyed a red letter day at Newmarket on Saturday as the boys in blue recorded a Group-race juvenile treble, highlighted by Native Trail’s decisive success in the Group 1 Darley Dewhurst Stakes.

Defending a three from three record coming into the seven-furlong contest including a last-time-out victory in the Group 1 National Stakes at the Curragh, Native Trail was settled in midfield by William Buick as Dubawi Legend and James Doyle looked to make the most of a relatively easy lead.

Dubawi Legend was still in front approaching the final furlong with most of his rivals in trouble but when Buick asked Native Trail to knuckle down, the result was impressive. The son of Oasis Dream picked up well when hitting the rising ground to move clear and score by two lengths, with Bayside Boy running on from the rear to claim third. 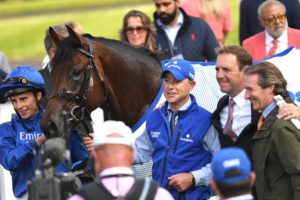 The successful trainer commented: “It is one of those occasions walking around the paddock where you gain more confidence as I thought he was just the standout.

“Full credit to all the team at home who have done a fantastic job. It is a big team effort and to have the result we have had today is huge.

“Most importantly, I think we have got a fantastic horse on our hands for next year’s 2,000 Guineas. On the back of Coroebus as well, we are in a very fortunate position to be going into the winter with two fantastic colts.

“He came in at 540kgs from the breeze-ups and full credit to the team that purchased him and Norman Williamson who consigned him.

“I was confident when William moved out and came on the right-hand side of James [Doyle] that he got enough daylight. Once he met the rising ground, there was one thing he wasn’t going to do and that was stop galloping.

“It was a very similar race to what we saw in the National Stakes. That acceleration once he is given office is quite remarkable.

“On his work at home prior to the National Stakes, you wouldn’t have been getting too excited, but he is that sort of a horse that warms into a race and does it all the right way round and that is what we saw today.

“I can’t see him going any further than a mile personally, but I like to be proven wrong. He is a horse that will go into the winter as an exciting Guineas horse.”

Also at Newmarket, the stamina test that is the Cesarewitch (2m2f) witnessed a tremendous finish between Buzz and Burning Victory, both better known as high-class hurdlers for their respective trainers Nicky Henderson and Willie Mullins. 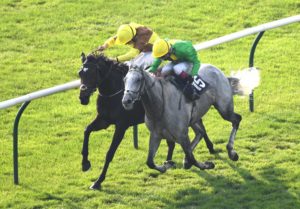 Buzz and Oisin Murphy (grey) get the better of Burning Victory and William Buick in the Cesarewitch | Photo: George Selwyn

It was Buzz and Oisin Murphy who managed to overhaul Burning Victory and William Buick close to the line, recording a length-and-a-half victory for owners Thurloe Thoroughbreds in partnership with Royal Marsden Cancer Charity.

Murphy and Buick are currently going head-to-head in the jockeys’ championship, which the former leads 147-138 with one week to go.

The finale, the Group 3 Darley Stakes (1m1f), went the way of the John and Thady Gosden-trained Mostahdaf and Jim Crowley. The son of Frankel, owned by Shadwell, has now won five of his six starts and looks set for a return to Group 1 company in the near future. 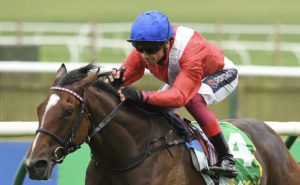