Awards host and TBA National Hunt Committee member Nick Luck, lead the 180 guests through each award as the evening began on a note of true celebration, with Lord Oaksey being honoured for his successs with Cheltenham Gold Cup winner Coneygree, who was named Leading Novice Chaser and Leading Chaser. Lady ‘Chicky’ Oaksey received both the Mickley Trophy and the Pitchall Trophy on her late husband’s behalf.

The Highflyer Trophy for the Leading Hurdler went to Heather Calzini, the breeder of Irish Grade 1 winner Lieutenant Colonel, who said she was, “incredibly honoured to be recognised, let alone win” .

Another British-bred winner of an Irish Grade 1 hurdle was Sizing John, whose breeders Bryan and Sandra Mayoh collected the Shade Oak Trophy for the leading Novice Hurdler for the son of Midnight Legend.

The Yorton Trophy for the Leading NH Flat Horse saw Bill and Diana Bromley invited on to the stage to accept their award for Yanworth’s impressive achievements. A DBS Spring Store Sales graduate who won two bumpers before finishing second in the Listed Bumper at Ascot, Yanworth looks an exciting prospect for future seasons

Richard Bridges was the recipient of the Overbury Trophy for Leading Chase Mare for the Harry Fry-trained Highland Retreat, who won two of her four chases last season, including a Listed contest at Doncaster.

Robert and Shirley Carter, the breeders of another Harry Fry stable star, Grade 1 hurdler Bifofapuzzle, visited the stage twice during the evening to claim both the Little Lodge Trophy for the Leading Hurdles Mare and the Beech Tree Trophy for the leading Novice Hurdles Mare titles.

Shade Oak Stud’s David and Emma Hockenhull were delighted to receive the penultimate award, the Mill House Trophy for the leading National Hunt Flat Mare, for Hollies Pearl. As a winner of three bumpers, including the Listed Mares’ Bumper at Aintree, she beat racecourse rivals Chocca Wocca and Lifeboat Mona, who were also shortlisted.

Commenting on the occasion, TBA National Hunt Committee Chairman Robert Waley-Cohen said: ‘This celebration dinner is the result of a new TBA National Hunt Committee initiative, so we were thrilled to see it become such a success. We are extremely grateful for the support of DBS, both financially and in helping to organise the event, as well as the individual sponsors who sponsored each award.

“It’s not often we are able to gather the breeders together, acknowledge their successes and celebrate the best of British National Hunt breeding and we are so pleased that everyone had such an enjoyable time.” 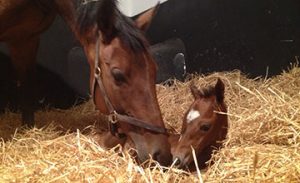 Up Next
First foal for Quevega