Wonderful Winx makes it 31 in a row
Stories

A look back at the homebreds, sires and dams who hit the fore during the weekend’s racing

Papagana returned to form at Doncaster on Saturday when she was an impressive 12-length winner of the Listed mares’ novices’ hurdle for trainer Oliver Sherwood and owner-breeder Dominic Burke.

The six-year-old daughter of Martaline was stepping up to 3m½f for the first time and she saw out the trip better than her rivals to secure valuable black type.

Hugely exciting winning the mares Listed race at Doncaster with home bred Papagana. Wonderful for Oliver and his team who have done awesome job with mare. Great pedigree and looks so will make a great broodmare prospect. Very exciting.

Papagana is out of the winning Highest Honor mare New Destiny, who is a half-sister to the late top-class jumper and sire Nickname, Grade 3-winning chaser Nom De D’La, the Graded winner Nom D’Une Pipe and the Grade 1 scorer N’Avoue Jamais.

The last weekend of February underlined the loss of Irish stallion Gold Well to the NH ranks and again this weekend the unraced brother to Montjeu was represented by two more winners in the shape of Grimthorpe Chase scorer Chidswell and handicap hurdle victor Hard To Forget.

It was the Nicky Richards-trained Chidswell who got the ball rolling on Saturday when recording a wide-margin victory at Doncaster for owners David and Nicky Robinson, who recently suffered the tragic loss of talented staying chaser Baywing.

Over at Sedgefield on Sunday, the Henry Oliver-trained Hard To Forget, a member of Gold Well’s penultimate crop, justified favouritism to land the 2m4f handicap hurdle by nine lengths.

There could be more success for the former Arctic Tack and Beeches Stud resident at the Cheltenham Festival, as a number of his progeny are entered to contest major races including Cue Card’s half-brother Hugos Other Horse, who could line up in the Grade 1 Weatherbys Champion Bumper.

Having supplied five winners across Britain and Ireland in the space of five days last month, Kedrah House Stud’s Well Chosen was back on the mark on Sunday when the Noel Meade-trained Sixshooter was an easy winner of the concluding bumper at Leopardstown.

The 20-year-old son of Sadler’s Wells, who is out the Musidora and Nassau Stakes heroine Hawajiss, has really made his mark with his jumps progeny in recent years. His son Jury Duty captured the American Grand National in October.

His other promising performers include the Gordon Elliott-trained Chosen Mate, who held on by a nose to win a Grade 2 novice hurdle at Naas last month, and the Joseph O’Brien-trained Midnight Run, last seen winning a two-mile bumper at Naas and a contender for the Weatherbys Champion Bumper at the Festival next week.

Bred by Christopher McKeever, Sixshooter is the third foal out of the placed Luso mare Lobinstown Girl and a brother to the Meade-trained She’s A Star, a five-time winner who has been Grade 3-placed. The dam’s family traces back to multiple Grade 1 winner Anzum. 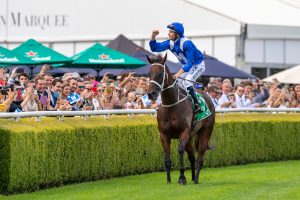 Up Next
Wonderful Winx makes it 31 in a row