The National Stud has had a number of homes: initially Ireland, at what is now the Irish National Stud, then Dorset and West Grinstead before 500 acres were leased from Jockey Club Estates in Newmarket. That was back in 1963, so for more than half a century, the stud, initially government-owned and now a subsidiary of the Jockey Club, has held its dominant position in the centre of the town which many would identify as Britain’s racing and breeding heartland.

It hasn’t always been plain sailing behind the scenes of this important establishment. A period of financial losses and management turbulence in the early part of this century was quelled after the appearance of Brian O’Rourke as Managing Director in 2009. Earlier this year, O’Rourke, who is widely credited as having given the stud a much-needed lift, both financially and in its client relations, left to manage Copgrove Hall Stud in Yorkshire for the family of the late Guy Reed. Into his big shoes steps Tim Lane, for many years the Manager at John Deer’s Oakgrove Stud.

The move from rural Wales to Newmarket isn’t a complete shock to the system for Lane, a former point-to-point rider who also served time with James Fanshawe during his riding days. It was, however, a tough decision to make.

“It killed me to leave [Oakgrove] really, it was a wonderful job and I had some really good days there,” he recalls. “Al Kazeem was the pinnacle – the horse of a lifetime for everyone involved. Mr Deer is an amazing man and a great friend. He was very good to me.”

Our conversation takes place in the boardroom at the National Stud’s Wavertree House in the depths of the 500 acres running alongside the July Course. A very affable character, Lane would patently be more at home outside on the land, his farming family background having led him to a career he clearly relishes but one to which he initially felt he wasn’t suited.

I rode badly as an amateur but that led to someone I used to ride for introducing me to Malcolm Bastard. Without his input I wouldn’t be where I am now

“I’d love to have done the National Stud course but I had no way into this side of the business and as I could ride a horse to a degree I went that way, even though we’d always had mares at home,” Lane says. “I rode badly as an amateur but that led to someone I used to ride for introducing me to Malcolm Bastard. Without his input I wouldn’t be where I am now.

“Through Guy Upton I was introduced to John Deer and at first I didn’t think I’d be the man for the job but I went to the farm and felt that there was work I could do to improve it. Guy was the racing manager and did an amazing job placing the horses but I came from more of a farming background so it worked well.”

Though the stud’s Diploma Course, which has now been running for more than 30 years, wasn’t an option for Lane, it has proved to be a vital springboard for many young people coming into the breeding side of the racing industry and, with increasing focus being placed on education and training, it is a side of the business which Lane is eager to uphold and enhance.

He says: “I’m a great believer that if you keep working hard you do get there in the end – and I guess I’m just one example of that. I think these days there are better chances for the younger people coming into the industry, with the likes of the Darley Flying Start, the BHA Graduate Programme and the course here.”

The National Stud’s six-month diploma course annually takes up to 24 students aged 18 and over and offers vital hands-on experience along with more formal classroom sessions.

Lane continues: “After the students have been here for a fortnight they come out onto the yards. I started here in May so I caught the end of this year’s group and I hope the next intake we have is as good as that bunch of students.

“Young people make the job. If they’re into horses and interested, it’s great and if they’re not then it’s not the job for them. They are looking after livestock who need around the clock care, so it’s hard graft here but that’s how it is in the outside world too.”

Recently pictured on mucking-out duty on the stud’s social media pages, Lane is clearly not averse to getting his hands dirty in his managerial position. “I love mucking out,” he laughs. “It’s a great time to think.”

During that time, he will no doubt be turning his mind to the future of the farm. For every commercial stud, the greatest asset is a successful stallion or two, but in a fiercely competitive marketplace, securing the next big thing is never easy. Back in 2015, the National Stud was tipped to be the new home of Golden Horn, who would have followed in the footsteps of fellow Derby winners Never Say Die, Blakeney and Mill Reef, only for Darley to swoop for Anthony Oppenheimer’s prized colt. 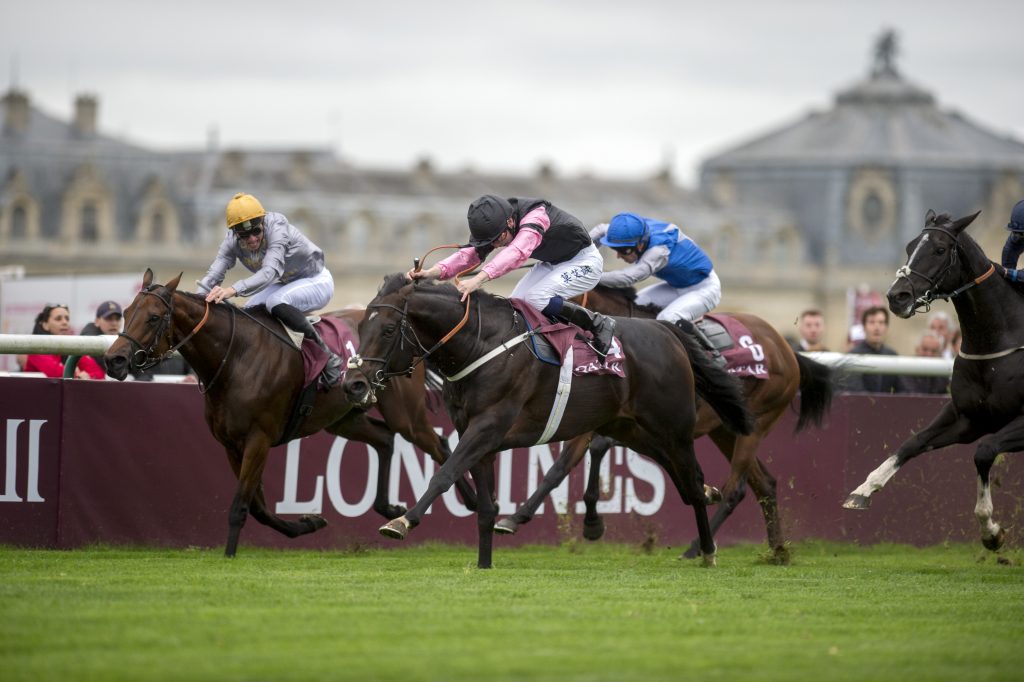 “It’s getting harder and harder to try to buy these stallions – we tried for Ulysses but he is going elsewhere – and we’d absolutely love to try to come to an arrangement with Saleh Al Homaizi and Imad Al Sagar to stand Decorated Knight,” Lane admits.

While stallion plans are finalised ahead of the 2018 breeding season, Lane is also busying himself with a potential expansion of the consigning side of the business. “It takes an awful lot of money to keep this place going but under Brian’s tenure things improved enormously and we have a pretty solid foundation to build on. It’s a big farm but there’s a great team of people here.

“We’re consigning more yearlings this year and trying to push that side of things. Obviously we’re a boarding farm and we’re very busy with that. We also take a lot of horses in training on breaks here and plenty of Newmarket trainers, such as Ed Dunlop, Ed Vaughan, James Fanshawe and Hugo Palmer, all use us for that.”

Every day is a challenge whatever you do but here is a bit different as what we do is so diverse. That said, it’s great to have something to get your teeth into

He concedes: “Of course it’s a very different job for me as it’s much more public, but I’m finding my feet. Brian O’Rourke did a tremendous job here and I have to keep that going, and perhaps look at different avenues to take the business. Every day is a challenge whatever you do but here is a bit different as what we do is so diverse. That said, it’s great to have something to get your teeth into.”

With some new additions to the stallion roster on their way (see panel), there’s another popular new resident, and one who is rather partial to getting his teeth into Lane.

“After I arrived in Newmarket, I went to see Ed [Dunlop] to see if we could get any spelling business from him and then he rang me to ask if we’d like Trip To Paris. Emma Hough is now preparing him for RoR classes and he went to his first show the other day. He’s very popular already with the visitors on our tours but he bit me the other day, though that was my fault as he was eating at the time.” 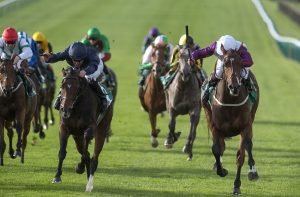 Up Next
Burke’s stellar season continues