The Ryan Moore-Aidan O’Brien combination have enjoyed a profitable week in line with their exploits so far this season, yet one prize – the Group 1 Qatar Nassau Stakes – had up until now alluded the formidable partnership.

This swiftly came to an end on the final day of the Qatar Glorious Goodwood Festival, as star filly Minding added a sixth Group 1 to her already accomplished race record.

The three-year-old daughter of Galileo was smartly away from the gates but settled into third under Moore, tracking pacesetter Swiss Range.

As the five-strong field turned into the home straight, Minding was angled out from the inside but was kept in by Godolphin’s Beautiful Romance, which shuffled the red-hot favourite back to fourth in the process.

But as the pace quickened with three furlongs to go, the 1,000 Guineas and Investec Oaks winner was switched to the outside, producing a steady challenge. Although not electric, she eventually took control just over a furlong out to land the honours by just over a length from the Cheveley Park-owned, Queen’s Trust.

With an astonishing ten Group 1 successes in the saddle already this season, this victory eased Moore further ahead at the top of the leading jockey’s standings for the week. The three-time champion jockey partnered no fewer than eight winners this week, including the gamble of the season Franklin D in the Betfred Mile.

“It was always going to be a messy sort of race today,” reflected Moore.

“She’s got an awful lot of class. It goes without saying, to keep this filly coming back after the hard campaign she’s had and has ran seven Group 1s and won six of them, she’s a very special filly.”

The County Tipperary maestro shows no signs of entering a lean spell at the highest level, with such a dearth of top-class ammunition at his disposal across the generations.

This success took his tally in the 1m 2f contest to three since he begun training, his previous two victories coming back-to-back between 2007 and 2008, with Peeping Fawn and latterly with Halfway To Heaven.

O’Brien said: “She’s thriving from race to race and physically she’s getting stronger and she has a super mind.

“We were a little bit worried today it was a small field and can get tactical and very messy but Ryan handled it great and we’re delighted.”

Physically she’s getting stronger and she has a super mind

The nine-year-old, who won the Stewards’ Cup on the same card five years ago was always prominent middle to far side for owners Chubby Chandler and Lee Westwood.

Despite facing the strong challenge of the Paul Midgley-trained Related, the gelding pulled out more in the run to the line to score by a neck.

The Stewards’ Cup itself rolled back the years, as Jeff Smith’s familiar purple silks which were carried to victory in the race in 1992 by Lochsong, tasted victory in this year’s renewal with Dancing Star.

The rapidly improving three-year-old filly trained by Andrew Balding crept into the bottom of the weights and took a similar route to the race as last year’s winner Magical Memory, after winning at Newmarket last time out.

After getting a good toe into the race by Ridge Ranger, the daughter of Aqlaam was produced with a withering run by David Probert to win comfortably by a length and a quarter from her nearest pursuer, Orion’s Bow. 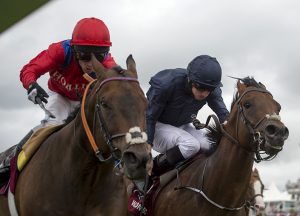