Was the young Olly Murphy’s original ambition to be a jockey?

Yes, until weight and size got in the way! I rode 25 point-to-point winners and six under Rules. I had four or five years as an amateur, enjoying a good craic and learning a bit about pace and race-riding, which can be a big help when you start training. I did plenty of pony club, hunting and a bit of eventing.

I even enjoyed helping the valets look after Allen Webb, Jim Culloty and Rodi Greene in the jockeys’ room. But Panorama did a piece on television saying I was under age and because of health and safety I had to stop.

It was at Upper Sapey point-to-point that I went out on a winner, but by then the scales had won. I had trials for Coventry City at 15 but racing got the better of me and I just played football on Sundays instead of four days a week after school. Now I just go and watch Aston Villa as much as I can and train for a couple of the Villa players.

How did you decide that the time was right to start up on your own in England in 2017?

I just thought Gordon Elliott had achieved an awful lot in the time I was working for him and I was always told it’s best to get out when people are at the top. I’m sure the way Gordon’s going he will be right up there for many years to come. I had learnt loads.

Racing is a young man’s game and the time was right after nearly five seasons there. I wanted to enjoy the game myself, so I came home.

The biggest challenge at the beginning was everyone waiting for me to fall flat on my face, having spent all that time with Gordon… going round with my eyes closed and learning nothing.

I must admit I felt the whole world was sat on my shoulders, then all of a sudden the pressure came off with my first winner, Dove Mountain, at Brighton.

You spent two summer school holidays followed by four years as assistant to the great Gordon Elliott in Ireland. What responsibilities did that involve?

I did a lot of racing, worked in the office, ran some syndicates and dealt with owners. Gordon’s head man, Simon McGongle, who runs the yard and works along with all the staff, was a big support, too.

I simply loved being assistant to a top trainer. Gordon was always very good to me and took me under his wing; I was as keen as mustard.

Has the involvement with all the Elliott success heaped a lot of expectation on your shoulders? If so, how do you handle the pressure – and the disappointments?

I’m not the sort of person who bothers much about pressure. I think I might even thrive on it. You bring pressure on yourself with success as well as failure. I’m afraid there are a lot of people who want you to fail in this game.

But yes, there was pressure at the beginning and you just hope for a good start and even better things to come. The more you worry, the less things will work out for you.

The ambition is to keep improving the quality of horses

My parents have been brilliant and it’s great to have them over the road when I come home after a bad day at the races. They are always there to give me a lift.

You just have to wake up the next morning and have a go again.

You are on record as saying, ‘I learnt more with Gordon Elliott than I did in the first 22 years of my life’. Exactly what did you learn?

Keep your horses in the worst company and yourself in the best! Seriously though, Gordon started off from nothing, learnt how to run a business and obviously train racehorses.

His management of staff is very good, too. Being there amongst it all you learn how everything should be done in the right way. 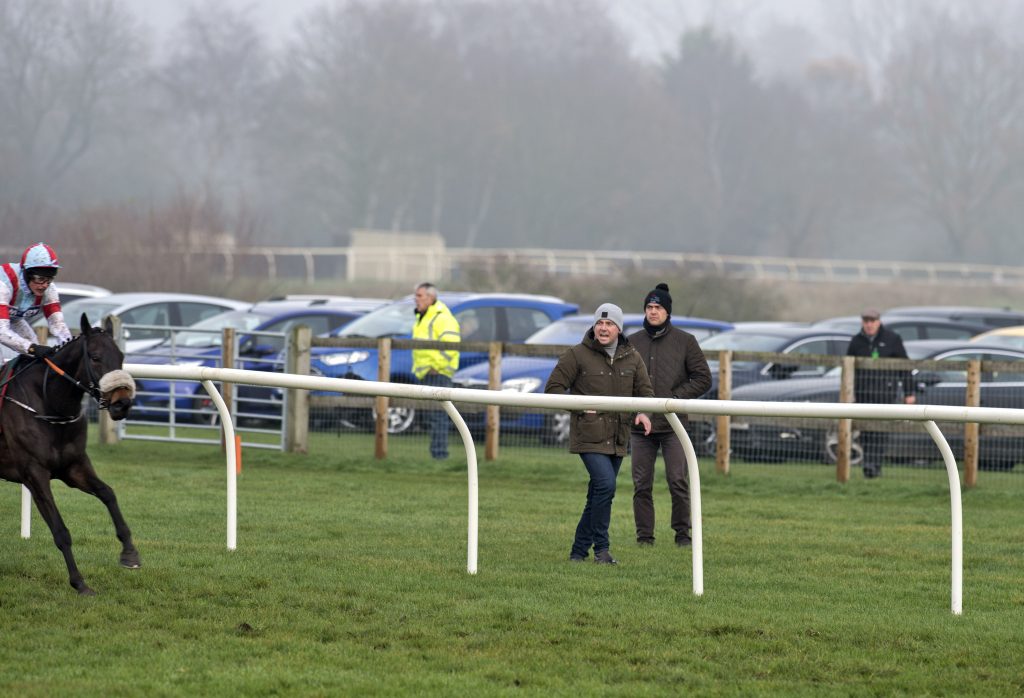 Murphy cheers on Skandiburg and Fergus Gregory on their way to winning a novice hurdle at Fakenham in December – Photo: George Selwyn

Getting horses fit is the easy part, but Gordon manages to keep a successful business going at the same time as making sure his staff are happy. He has the recipe for success.

You had your first winner, Dove Mountain, at Brighton in July 2017 and your 100th, Mizen Master, at Fakenham in November. What will be the formula for the Murphy stable in 2019?

The ambition is to keep improving the quality of horses and beat our total last year of 47 winners, which we have achieved. Increasing the numbers is important, while producing winners for the big occasion raises the profile.

We have 97 stables and I try to keep the place as similar to Gordon’s as I can; high barns with plenty of ventilation. We have 30 babies and 70 horses to run, so about 100 riding out.

Your mother Anabel has trained at Warren Chase stables, near Stratford for 30 years and your father, Aiden, is a highly successful bloodstock agent. They must have been a great help when setting up…

They have instilled in me the importance of being a competent businessman. They tell me it’s no good being a successful trainer and not being able to run the operation as a business.

Mum and dad have been teaching me how to manage the stables as a commercial set-up as well as how to train winners. I haven’t had a lot of business experience but they have been a tremendous help in that department.

It comes down to having to make a living, something we all have to do in whatever walk of life.

You were childhood pals with Dan and Harry Skelton, whose gallops are only two miles from your stable. Do you get together much now your lives are so busy?

I see Dan at the races and meet Harry socially. I talk to Harry most days and we share lifts to the races. It’s great to see him riding so many winners and I hope he’ll be riding plenty for me in the future. We used to ride out together for Ian Williams.

I also went to the Olympics with Dan and Harry and we spent family holidays together. Harry had his first ride as a jockey for my mum. Yes, we go back a long way together as families.

We all like to win, beat each other and still remain friends.

How much of Elliott’s Cullentra House lay-out have you introduced at Warren Chase?

I have tried to keep everything as straightforward as possible. The gallops, feed, rugs, staff starting times and hours are similar to Gordon’s.

I brought my sand over from Ireland to replicate Gordon’s gallop. I know it was expensive but I wanted to do it the right way.

If all else failed, I didn’t want to feel I’d taken any shortcuts.

Do you source and buy horses yourself? What do you look for in a Flat horse and jumper?

I buy them myself at the lower end of the market. But I realise I am very lucky to have dad’s expertise when selecting stores and horses from Irish point-to-points.

Ryan Mahon, a friend, is also buying for me. Between the three of us we do most of the buying, though some of my owners use their own agents. 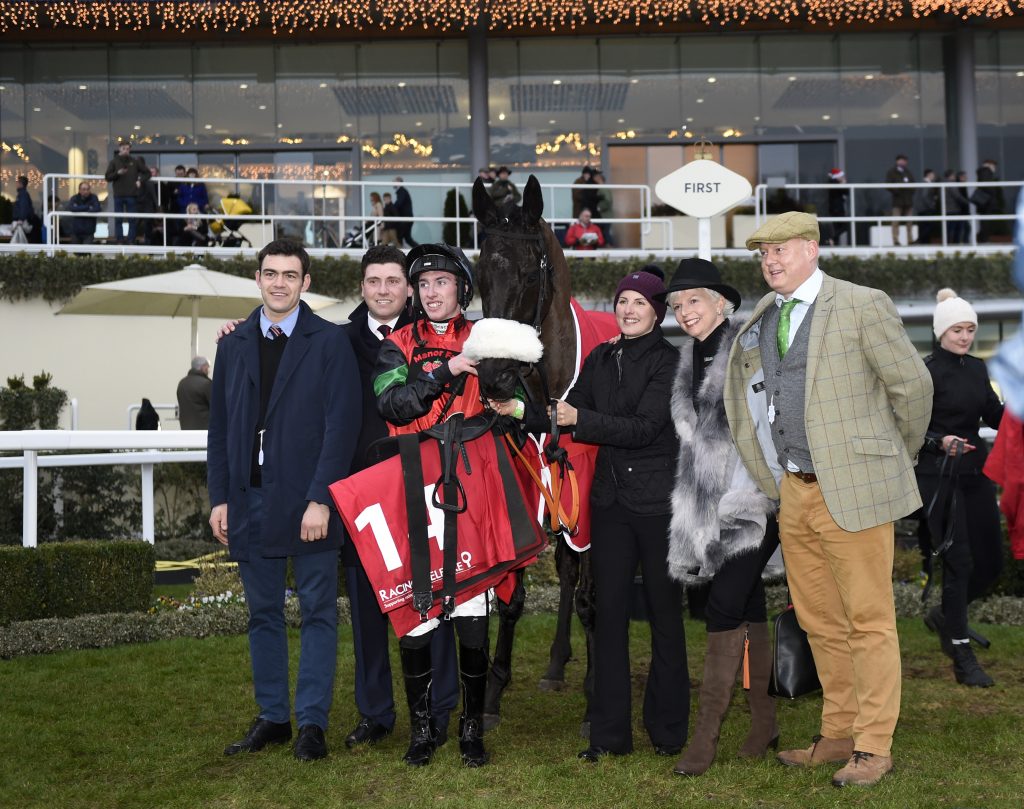 Murphy and connections of Hunters Call after his Grade 3 victory at Ascot in 2017 – Photo: George Selwyn

When I am after a jumper it has to have size and quality; there’s no getting away from that. You’ve also got to have a decent budget.

Unfortunately, if you’ve got only ten grand you’re not going to tick all the boxes. I try to turn a bad horse into a winner, or hopefully even a good horse.

Winners are what you need because they attract owners and, after all, that’s what we’re trying to do. I have a couple of two-year-olds but jumping is where my heart lies.

What is the key to attracting new owners and how do you do it?

Training winners attracts new owners. But, importantly, racing is moving forward and it’s vital to get new blood into the sport. By that I mean new and young with lots of enthusiasm.

I am young [27] and we need similar aged people to keep it going as owners, trainers, jockeys and racegoers. The younger element can join in the sport with smaller syndicates as well as racing clubs.

What part of the job gives you most satisfaction – and most stress?

It is very satisfying training winners for anyone, but more so for a small syndicate or for someone who hasn’t tasted success before.

Winning with horses other people haven’t won with is a good advertisement for your business.

The most stressful is undoubtedly ringing owners to give them bad news. We all have to do it and it’s part of the job, but it’s a tough phone call to make.

Having worked on both sides of the Irish Sea, is there a difference in the possible effects Brexit will have on racing in Ireland and in England?

I don’t think Brexit is going to be as bad for our industry as people looking in from the outside would have you believe. It’s concerning but I don’t think people are not buying racehorses because of what’s going on in Europe.

We are very lucky because we are situated [near Stratford] in the middle of England and can find the staff we need. 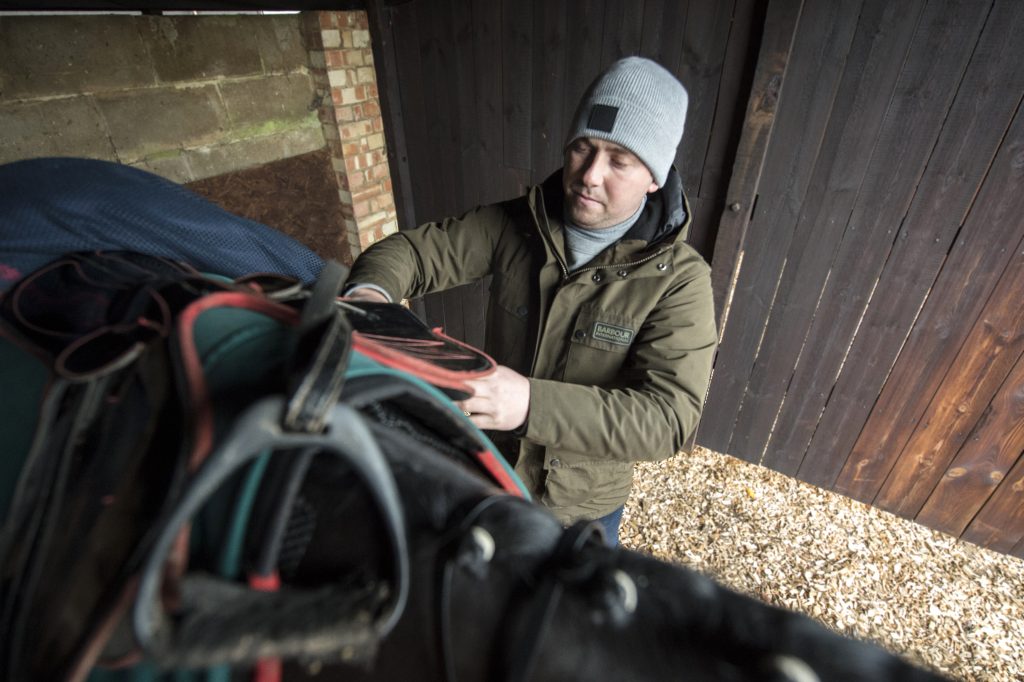 We have a lot of experienced staff as well as a lot of ex-jockeys riding out here. Stable staff are the life and soul of racing and I look after them as well as I can.

I am lucky to have a real enthusiastic bunch, who work hard, play hard and are mad keen for winners.

As a new member of the training ranks, what would be your advice to anyone wishing to join the profession?

Go out, buy bad horses and try to win with them. Don’t head to Newbury on a Saturday and finish sixth in a maiden hurdle; winning small midweek races is the best way to start. Don’t try to take on the big lads at the big meetings.

The Ascots and Newburys with their nice owners’ lunches are no good if you’re not winning. Don’t fly too high too soon.

I want to be champion trainer

I must admit I was nervous when I set out and I would often ring Gordon for a bit of advice and encouragement. You’re never too good for advice!

Thomas Darby is an exciting young horse. What’s the plan for the rest of the season – and can you give us a dark horse to look out for?

Thomas Darby could be very good and is being aimed at the Supreme Novices’ Hurdle at the Festival. He has plenty of pace and a bit of quality about him but was very green when he won at Cheltenham. He should keep improving and likes a bit of decent ground. The plan has been to give him another run and then a prep race before Cheltenham.

Finawn Bawn is a nice horse with plenty of promise about him. He won his novice hurdle at Bangor at the beginning of December and is the type who should go on through the season.

Competing at the top end on Saturdays. Any young person who’s training racehorses and doesn’t want to be champion trainer needs to go and find a different occupation.

I want to be champion trainer, the best. If you don’t want to be the best, then you’re in the wrong job. 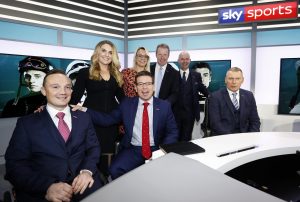 Up Next
Different strokes