Mullins the dominant force at Cheltenham

Bookmakers were left licking their wounds after a first day of the 2015 Cheltenham Festival that was dominated to an unprecedented scale by Ireland’s all-conquering duo of trainer Willie Mullins and rider Ruby Walsh.

The pair recorded a three-timer in the opening Grade 1s on Tuesday in front of a record first-day Cheltenham crowd of 63,249.

Douvan’s effortless Sky Bet Supreme Novices’ Hurdle victory from stabemate Shaneshill was followed by a front-running triumph for Un De Sceaux in the Racing Post Arkle Chase before Faugheen provided the icing on the cake when running out a brilliant winner of the Stan James Champion Hurdle.

A Walsh/Mullins four-timer – set to cost the betting industry £50 million – was sensationally ended as hot favourite Annie Power fell at the final obstacle of the OLBG Mares’ Hurdle.

But it was not enough to stop the Mullins bandwagon as his second-string mare Glens Melody prevailed in a photo under Paul Townend while bookmakers still suffered losses on the three-timer running to £10 million according to Ladbrokes.

“It’s rare to have four runners on a day like this, let alone four winners – I keep saying to myself, ‘enjoy it while it lasts’,” reflected Mullins. “You couldn’t write a script like that, but I just knew that all the horses were doing everything right. We had no sickness, no virus, no bad weather – it was going scarily well, and I thought coming here it was either going to be a great success or a blow-out.”

Not only did Mullins send out a four-timer but he saddled a 1-2-3 in the Champion Hurdle as Faugheen justified 4/5 favouritism when making the running to beat stablemate Arctic Fire by a length and a half. Hurricane Fly was a further five lengths back in third.

“We looked at the race and thought no one probably wanted to make it, and Ruby just thought making the running might be the thing to do. I was happy once he was happy to do it. There didn’t seem to be a potential front-runner.

“I wasn’t concerned at any stage, I thought he was well in control all the time.”

Faugheen, a son of Germany bred in Ireland by Dr John Waldron, began his career when winning a point-to-point and is now unbeaten in eight starts under Rules.

“He’s young, he’s improving, he’s coming on and what can I say, he’s got a long way to go to be as good as Hurricane Fly. He probably won’t jump a fence. When you’ve got a good hurdler like this there’s no reason to go novice chasing.”

Walsh had left a choice on his Champion Hurdle mount until the last minute and admitted he was torn between the winner and Hurricane Fly.
“It was a massive decision not to ride Hurricane Fly,” said Walsh. “I knew that he was in great nick but a lot of the credit goes to John Codd (who looks after Faugheen at home). He is a wonderful horse, he has jumped better – he missed the second last.

“Faugheen is an incredible little horse, a fine horse. He was awkward at the second last but pinged the last and saw it out well.”

Speaking of Mullins, he added: “It’s some training performance to have the Champion Hurdle 1-2-3 and a 1-2 in the Supreme. It’s a great place to work and the man’s a genius. He has a great team of staff around him and it’s brilliant to be part of it.”

French-bred Douvan, who has now won all three of his runs for Mullins, is unlikely to be meeting Faugheen over hurdles next season.

“Douvan is every inch a chaser – although they may be famous last words as I did say the same about Faugheen last year,” said Mullins. “ He’s got scope and needs to fill out – after a summer at grass I hope he comes back a big, well-muscled horse. He’s raw, but has natural ability.”

Equally big things are predicted for fellow French import Un De Sceaux who is quoted by bookmakers at 3/1 for next year’s Queen Mother Champion Chase.

“He was very good,” said Walsh. “He has a very, very high cruising speed – that’s what two milers do isn’t it? He’s a bit like 800-metre runners, he just keeps going.

“He’s a very, very talented horse and Willie has done a great job with him. He reminds me of (2004 Champion Chase winner) Azertyuiop when he was a novice and it would be wonderful if he could go on and reach the heights that he did. The dream is alive, isn’t it?”

A great day for Ireland continued when Cause Of Causes won the Toby Balding National Hunt Chase for trainer Gordon Elliott. 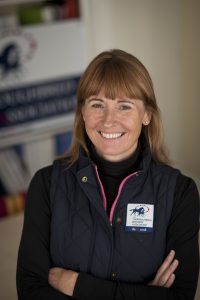 Up Next
TBA announces Breeders' Dinner