Jump racing’s all-conquering triumvirate of Susannah Ricci, Willie Mullins and Ruby Walsh went into the Cheltenham Festival’s opening day carrying the weight of punters’ expectations and – although not everything went as scripted – they teamed up for three victories on a Tuesday that will linger long in the memory.

While Min could only finish second in the opening Sky Bet Supreme Novices’ Hurdle, Douvan made amends 40 minutes later with an imperious performance in the Racing Post Arkle Chase, coasting home seven lengths clear of the field.

Next up was Annie Power, who came out best in the fastest-ever Champion Hurdle as she became only the fourth mare, and the first in 22 years, to capture the two-mile showpiece.

The Grade 1 treble was completed when Vroum Vroum Mag saw off 18 rivals to win the OLBG Mares Hurdle.

The mare Dawn Run, winner of the 1984 Champion Hurdle and Gold Cup two years later, remains the only performer – male or female – to win both Cheltenham events and it’s not inconceivable that Annie Power will bid to repeat the feat.

“In a year’s time, who knows what is going to happen?” said Mullins, whose father Paddy trained Dawn Run. “When I bought Annie Power I thought this was the closest mare I’d seen to Dawn Run.

“We bought her to go over fences like Dawn Run, but that will be discussed – the same owner has Faugheen, Douvan and some nice young novice chasers, but the way she jumps with her size and scope – if he wants to emulate Dawn Run, so be it. But it’s much easier to keep a horse sound jumping hurdles than trying to go for a Gold Cup.”

Asked if there had been any thoughts about retiring Annie Power to the breeding shed, Mullins said: “She’s a racehorse to me – a lot of other guys would say she should now be a broodmare, but that’s not on my agenda and I don’t think it will be on Rich’s. We’re going to treat her as a racehorse, but when the effects of the champagne wear off different ideas come up.”

But not quite everything went Mullins’ way. The Festival’s most-successful trainer of all time, Nicky Henderson, enjoyed his 54th career victory at jump racing’s most-coveted event when Altior held off Min to take the opening Supreme Novices’ Hurdle.

“We’ve always thought he was seriously good,” said Henderson. “We’ve had some very good horses beaten in this race so it’s nice to have one win for a change.

“He does look smart enough to think about hurdling again next year but he will make a lovely chaser. I hope he’s back here next year but doing what I’m not too sure at the moment.”

Annie Power’s sire Shirocco had a double when Derek O’Connor steered Minella Rocco to victory in the National Hunt Chase in the colours of J P McManus.

The card was completed by Un Temps Pour Tout, who realised £450,000 at a DBS sale in 2013, winning the Ultima Business Solutions Handicap Chase and Ballyalton prevailing in the concluding Close Brothers Novices’ Handicap Chase for trainer Ian Williams. 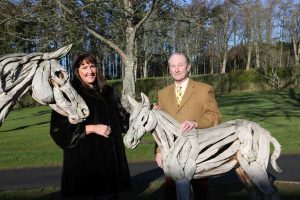 Up Next
Shooting for glory