Mukhadram to retire to Nunnery Stud

By The Owner Breeder staff 26 September 2014

Sheikh Hamdan has enjoyed a terrific season on the racecourse and his stallion roster at Nunnery Stud is due to receive a boost come the end of the Flat season with news that Eclipse Stakes winner Mukhadram will retire to the Norfolk farm.

Now five, the son of leading sire Shamardal finally claimed Group 1 honours in July following runner-up finishes at the top level to African Story in the Dubai World Cup and to Al Kazeem in last year’s Prince Of Wales’s Stakes. Trained by William Haggas, Mukhadram has also claimed the Group 2 York Stakes and Group 3 Brigadier Gerard Stakes among his five victories and is likely to be seen on the racecourse for one final time in the QIPCO Champion Stakes on British Champions Day.

Mukhadram was bred in Britain by Wardall Bloodstock out of the Timber Country mare Magic Tree, a half-sister to St Leger hero Mastery and fellow Group 1 winner Kirklees. He was sold to Shadwell as a foal for 190,000gns and has earned just shy of £2 million in prize-money from his 16 starts to date.

Mukhadram will join existing Shadwell stallions Nayef, Mawatheeq and Sakhee at Nunnery Stud in Thetford with his fee to be announced at a later date. 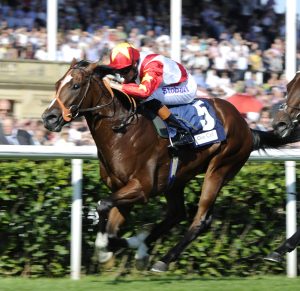 Up Next
Toronado to join the National Stud