Ponche De Leona, the dam of Breeders’ Cup Classic winner Mucho Macho Man, took centre stage at Keeneland’s January Horses Of All Ages Sale on Tuesday when sold for $775,000 to Reiley McDonald on behalf of Betty Moran of Brushwood Stable.

“The mare gets great foals. She’s the dam of a Breeders’ Cup winner and there are not many like her in the sale. We stretched a little to get her but who knows what the foal’s worth,” said McDonald.

The grey daughter of Ponche, who was offered by Blake-Albina Thoroughbred Services in foal to Distorted Humor, surpassed the $750,000 paid during the opening session for Life Happened to lead proceedings in Book 1, her price more than double that given for the second top lot of the day.

Late in the day, Reiley McDonald was on the other side of a major transaction when his Eaton Sales offered the sole mare in the catalogue in foal to Galileo, the nine-year-old Sweeter Still. The Grade 3 winner was knocked down for $750,000 to Damian and Braxton Lynch’s Royal Oak Farm and is likely to be covered next by young Lane’s End stallion Union Rags.

“She could run and she’s got a great pedigree,” said Braxton Lynch, who purchased the mare on behalf of Union Rags’ breeder Phyllis Wyeth. “(She’s) in foal to the right stallion, and hopefully she’ll produce some runners. Hopefully one of them will be a Union Rags.”

Top of the yearlings offered on Tuesday was a colt by Malibu Moon out of Grade 2 winner Kettleoneup, who was bought by Elliott Walden of Maverick Racing for $225,000. 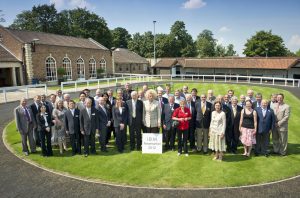