Gigginstown’s Petit Mouchoir advertised his Festival claims in March with an all-the-way victory in the Grade 1 BHP Insurance Irish Champion Hurdle at Leopardstown.

With no returning Faugheen owing to a slight muscle injury, Petit Mouchoir was taken to the lead after the first by David Mullins and looked to set a scorching gallop.

All the while the six-year-old was tracked a few lengths behind by Nichols Canyon, with the other two in the contest, Ivanonvich Gorbatov and Footpad somewhat detached.

The front pair came hurtling down to the second last with Nichols Canyon reducing the deficit to half-a-length. Turning into the straight, Petit Mouchoir extended the advantage once more and was almost three lengths up coming to the last.

Ruby Walsh and Nichols Canyon crashed out at the final flight and the Willie Mullins second string Footpad gave chase to the leader but could only get to within a length at the end of the two mile trip.

Last year’s Grand National-winning rider rounded off a very fine week. Only on Thursday he partnered De Bromhead’s Champagne West to a comprehensive victory in the prestigious Thyestes Chase at Gowran Park.

“He has a serious amount of ability and has such a high cruising speed that you never feel like you are under pressure with him. He’s a terrific horse,” reflected Mullins.

“We went a right good gallop and he stuck at it and jumps so quickly, he’s a bit of a monster of a horse really. Ruby kept us honest, I felt him getting to my girths at the second-last and to be fair to my lad he put his head down and really galloped the whole way up the straight.”

The son of Al Namix now notches back-to-back successes at Grade 1 level, his first coming last month over course and distance in the Ryanair Hurdle.

For the County Waterford-handler Petit Mouchoir’s win registered a Grade 1 double on the day for the stable.

You never feel like you are under pressure with him

Only an hour earlier the Roger Brookhouse-owned Some Plan cruised home in isolation to win the Grade 1 Arkle Novice Chase, with his other three rivals failing to complete.

De Bromhead said: “It’s been a fantastic week for us winning the two Grade 1s here today and the Thyestes Chase on Thursday. We’re having an excellent season and I’m absolutely delighted that Petit Mouchoir has now won two Grade 1s.

“It’s hard to do what he has now done twice – go a strong pace from the front and keep going. He’s not a fast horse at home but he is a great galloper.” 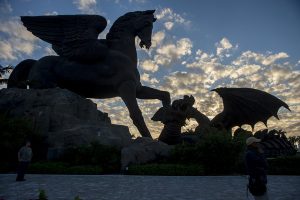 Up Next
Pegasus stroll for Arrogate