Hollie Doyle not resting on her laurels
Stories

Daughter of Zoffany is now a dual Group 1 winner

QIPCO 1,000 Guineas heroine Mother Earth added another Group 1 to her record when she battled to success in a four-way finish of the Prix Rothschild at Deauville on Tuesday.

The three-year-old daughter of Zoffany was switched by jockey Ryan Moore to the near side rail with around three furlongs to go and was granted a smooth passage to hit the front just at the final furlong pole.

From there, Sagamiyra, Speak Of The Devil and Rougir all emerged from the pack to challenge Mother Earth but she found plenty under the urgings of Moore to hold on and win by a head from Sagamiyra.

There was a further short-head back to Speak Of The Devil in third while English raider Primo Bacio could only finish seventh after encountering trouble in running much like she had done in the Falmouth Stakes last month.

“She’s in the Matron and Prix du Moulin and we may look at America again later in the year. We’ve been very lucky in France this year and been over with some lovely horses.”

Elsewhere at Deauville on Tuesday, young trainer George Boughey secured a first Group victory of his nascent career when Oscula got the better the Andre Fabre-trained Zellie and Simon and Ed Crisford’s Daneh to claim the Group 3 Prix Six Perfections. 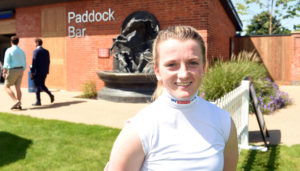 Up Next
Hollie Doyle not resting on her laurels