Moore off the mark in first Classic

Ryan Moore’s decision to sign up to ride for Ballydoyle this year was swiftly vindicated when he landed the first Classic of the season aboard the hugely impressive Gleneagles.

Making a bold move with two furlongs still to run in the 2,000 Guineas, Gleneagles surged clear of his 17 rivals to beat Godolphin’s staying-on Territories by two and a quarter lengths, with last season’s crack juvenile Ivawood another three-quarters of a length back in third.

While this was Moore’s first 2,000 Guienas triumph, for trainer Aidan O’Brien it was a record-equalling seventh success in the race, following his first win in 1998 with King Of Kings.

He said: “I’m a very small part of a very big team of people and that’s the reality. It’s a privilege to be in the position we’re in at Ballydoyle with these horses but there’s a lot of people putting in a lot of hard work even before these horses are born.”

O’Brien’s other runner, Ol’ Man River, trailed home in last place under Joseph O’Brien but the trainer’s son nevertheless played his part in the victory as the daily work rider of Gleneagles.

The trainer added: “Joseph rides him every day and has been really happy with him. He and Ryan had discussed the race beforehand and Joseph said that [Gleneagles] doesn’t do too much when he hits the front but when Ryan came in today he just said that he had to commit him that early because he travelled so well and nothing could lead him.

“He’s a great traveller and he has a lot of speed – five, six or seven furlongs would have been no problem with him as a 2-year-old.”

The Galileo colt’s victory boosted an already stellar start to the broodmare career of his dam You’resothrilling, a Group 2-winning sister to Giant’s Causeway whose first foal, Marvellous, who is also by Galileo, won last year’s Irish 1,000 Guineas. The team at Ballydoyle will be hoping that lightning can strike thrice for the family as her current two-year-old has been named Coolmore. 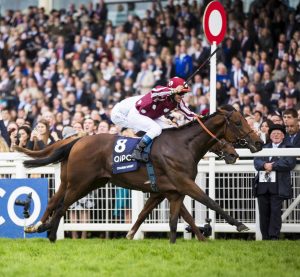 Up Next
Adelaide retires to Coolmore Australia