Many of the supposed weight-for-age highlights of the current European season have been disappointing in the sense that they haven’t provided a proper clash of the generations, on account of being too light on either three-year-olds or older horses. Not so the Prix du Haras le Fresnay-le-Buffard Jacques le Marois at Deauville, though, which was a cracker.

Leading the charge for the three-year-olds up Deauville’s straight mile appeared to be a pair of Classic winners, Prix du Jockey-Club victor Intello and 2,000 Guineas hero Dawn Approach. Supporting this pair in their attempt to uphold the honour of the Classic generation were three more good colts, most notably last season’s Prix Jean-Luc Lagardere winner Olympic Glory, who had made a good start to 2013 by taking the Greenham Stakes at Newbury before running poorly in the Poule d’Essai des Poulains.

The ranks of older horses in the Prix Jacques le Marois were, if possible, even stronger. The mighty five-year-old Invincible Spirit mare Moonlight Cloud, who only seven days previously had won the Group 1 Prix Maurice de Gheest over 1300m at the same track for the third consecutive year, was in the field, bidding to become the third winner of the race trained by Freddy Head, following Tamayuz in 2008 and Goldikova in 2009.

Backing her up was another course specialist, the John Gosden-trained Elusive Kate (who was trying for her third successive Group 1 victory) as well as two horses who have won big mile races at Ascot this year: Declaration Of War and Aljamaheer, winners respectively of the Queen Anne Stakes and Summer Mile.

As it turned out, the race was very finely balanced between the generations, Moonlight Cloud holding off the flying finish of Olympic Glory by a nose. Intello, confirming himself a very legitimate contender for the Prix de l’Arc de Triomphe, finished third, ahead of Declaration of War and Dawn Approach. The form book says that this was a magnificent performance, and the clock supports this: 1:33.60, only 0.10 seconds off Goldikova’s track record.

As well as marvelling at the continuing progress of the terrific George Strawbridge-bred and -owned winner, we are left considering two interesting points. Firstly, how much will Moonlight Cloud’s Makfi yearling half-sister fetch when offered as lot 89 by Haras des Capucines on Saturday at Arqana’s August Yearling Sale in Deauville? And, secondly, how supremely talented was the peerless Australian sprinter Black Caviar, who was clearly well below her best when she ran in the Diamond Jubilee Stakes at Royal Ascot last year, but still managed to beat Moonlight Cloud? 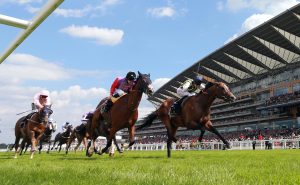 Up Next
GBRI appoints International Executive