Moonlight Cloud extended her outstanding record to ten victories from 17 starts with success in the Group 1 Prix Maurice de Gheest at Deauville for the third year running.

The win was her fourth at the highest level, as she has also won the Prix du Moulin de Longchamp over a mile, and she may well step back up to that distance to contest Sunday’s Prix Jacques le Marois in a quick reappearance at Deauville.

As well as her growing list of triumphs, Moonlight Cloud will also be remembered as the horse to finish closest to Black Caviar, having crossed the line just a head behind the Australian superstar in the Diamond Jubilee Stakes last year.

A daughter of Invincible Spirit, Moonlight Cloud’s racing career may be all about speed but she hails from a family with middle-distance Classic credentials. Her dam Ventura, by Spectrum, is out of Wedding Bouquet, a Kings Lake half-sister to Derby winner Generous and Oaks winner Imagine.

Ventura has been a regular in the sales ring of late. She was sold in foal to Manduro at Tattersalls’ December Sale by Strawbridge through West Blagdon Stud for 58,000gns in 2009 when Moonlight Cloud was just a yearling. This was the first of three consecutive appearances at the sale. The following year she was bought carrying to Montjeu by David Redvers for 260,000gns and in 2011, Redvers’ Tweenhills Farm offered her in foal to their young sire Makfi and sold her for 900,000gns.

The purchaser this time was MV Magnier, whose grandfather Vincent O’Brien owned and bred Ventura, who was trained by his son Charles. The family originally parted company with her at the end of her racing career in 2001 for 500,000gns. 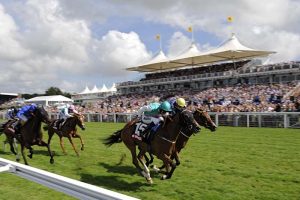 Up Next
Top-flight success for Winsili