A depleted four-runner Investec Coronation Cup looked a match between French visitors Dolniya and Flintshire but neither reckoned for the late and decisive run of five-year-old Pether’s Moon, who claimed a first Group 1 victory at the 21st attempt.

The consistent son of Dylan Thomas had been placed in all but four of his previous runs but stepped up to a new level when beating Dolniya by a neck in the dying strides to claim the 12-furlong contest under Pat Dobbs.

“John Manley, the owner, feels the horse goes really well for Pat which is why he rode him,” said Hannon. “John has always wanted a good horse, they are very hard to find and that’s why people have offered so much money for him. Pether’s Moon could go to Melbourne but I don’t know.

“Pat gave him a super ride. The horse does pull up in front – he did that in Turkey – and Hughsie has ridden some lovely races on him as well but he really goes for Dobbsy. I thought that we were going to be lucky to be second at one stage.

“Pether’s Moon has been round the circuit a little bit and it’s great for Peter and Ross (Doyle) who bought the horse at Fairyhouse for 52,000 euros.

“Everyone jokes about us not having middle-distance horses but we just don’t get sent many of them. We try and buy a different sort of horse and this is something that the yard has needed for a while. We can train them over any kind of trip – don’t worry about that. We just need the right kit – that’s all.”

Mark Johnston’s two-year-olds have made an electric start to the season and Buratino proved himself at the top of the stable’s pecking order when turning the Listed Investec Woodcote Stakes into a procession when scoring by six lengths under William Buick.

“Sometimes Buratino shows sparkling form at home and on the course and at other times he’s laid back and not so impressive, but today William said that was the real deal and a lot better than at Sandown last time,” said Johnston.

“I should think we’ll stay at six furlongs now because he seems to have this tendency to be a little slowly into his stride, but recovers so well.

“I thought he was out of the ordinary when he ran first time out, albeit it was only at Chelmsford, but at that point I would have thought he was my number one two-year-old. Then he disappointed at Ascot, and while he bounced back at Newmarket we had lowered our sights a little and were not too disappointed to come second at Sandown.

“Today the horse seemed much happier and William said he would have no hesitation taking him to Royal Ascot. We always thought the Norfolk Stakes would be the race for him there, but he’s come to lead from midfield today and I think the six furlongs probably suits him better.

“Things have moved on a lot since the start of the season, but he’s obviously right up there among my best juveniles.”

Buick was full of praise for the 2/1 favourite. “That was a good performance. It’s not very often that that race sees that performance. But he’s come on all the way and he’s thrived off his racing. It would be fair to say I was pretty impressed,” said Buick.

In 2008, Sir Michael Stoute and Ryan Moore teamed up to win the Investec Private Banking Handicap with future Group 1 winner Conduit and the pair won this year’s renewal with what looked another exciting three-year-old in Stravagante, home-bred by Michael Tabor out of his 2009 Musidora Stakes runner-up Star Ruby.

Stravagante went off a well-supported 7/2 shot as he coasted home by three and a quarter lengths.

“I suppose this horse must have improved considerably. He is obviously good and we will see what happens now with him,” said Tabor. “Michael was very enthusiastic about his chance today. He gave us every encouragement that he would win.

“On that performance he looked very decent and he might be a bit better than we’d hoped.

We didn’t see the best of him last time at Sandown, he slipped on the bend I think. The winner was Jack Hobbs.”

Moore feels there is more to come from the lightly-raced son of Rip Van Winkle.”I was a bit worried about the ground today but I was wrong about that,” said Moore. “He hasn’t had much racing, he’s improving and hopefully he will go on again.

“We went quick early on then we steadied down the hill. I was a bit mindful that they might sprint away from him and he might be a bit babyish but, once he has got into gear, he was never going to get beat. 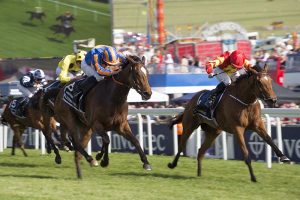 Up Next
O'Brien lands Oaks with 50/1 outsider