Black Caviar’s trainer Peter Moody can head to Royal Ascot with maximum confidence, having just enjoyed arguably the most successful afternoon of his training career last Saturday at Eagle Farm.

The dominant trainer in Melbourne, Moody is accustomed to top-class success on a regular basis: even leaving Black Caviar aside, he has tasted glory with a swag of different champions including Black Caviar’s predecessor as Horse of the Year, Typhoon Tracy, and her current principal rival for that title, the former Luca Cumani-trained Manighar, winner of three Group 1 races this year including the Australian Cup.

On Saturday at Eagle Farm, the principal racecourse in Queensland’s capital city Brisbane, Moody sent out the winners of two Group 1 races as well as saddling the four-year-old Zabeel mare Lights Of Heaven to win the Brisbane Cup, which used to be Queensland’s most prestigious race but which in recent years has been downgraded from Group 1 to Group 2 and shortened from 3200m to 2400m.

Lights Of Heaven and Mid Summer Music were both ridden by Moody’s stable jockey  Luke Nolen, but Brambles was partnered by Golden Slipper-winning rider Brad Rawiller. Brambles was the stable’s better-fancied runner (ahead of Nolen’s mount Vatuvei, who finished sixth) but the reason for the allocation of mounts was that Rawiller had won the Grand Prix in Brisbane on Brambles two weeks previously when Nolen was on duty in Adelaide on Black Caviar.

Not only will this domination of Queensland’s premier raceday have filled Moody with confidence in advance of his trip to England, but it will also have filled him with pride: he is a Queenslander born and bred, as is Luke Nolen.

Both trainer and jockey will be packing their bags for the UK in the coming days to join Black Caviar, who arrived at Abington Place Stables in Newmarket on Thursday evening.

Click here to read Thoroughbred Owner & Breeder’s exclusive interview with Peter Moody as he reveals his thoughts on running his great mare at Royal Ascot. 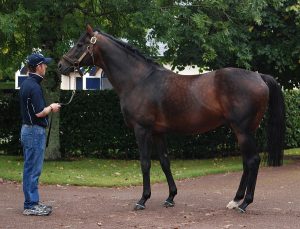 Up Next
Byerley Turk influence Eclipsed