Those from non-racing backgrounds who make a career in the sport can recall the day of reckoning with remarkable clarity. For Martin Mitchell, who will complete 40 years with Tattersalls on his retirement in December, it was an afternoon at Goodwood in 1962.

“It just grabbed me and I never looked back,” Mitchell, 63, reflects of his inaugural visit to the races. It was a seminal moment for the 15-year-old Charterhouse schoolboy who’d stumbled across the sport through his deep-rooted love of statistics.

One day in the school library he came across the racing pages in the newspapers. His preoccupation with the patterns of form figures led him to make daily selections which he followed so assiduously that by the time he ventured to Goodwood he was well versed in racing’s labyrinthine ways.

From that acorn flourished a career that has fulfilled his teenage dreams. It has taken him around the world, to some far-flung venues, yet his primary love endures. He is never happier than when immersed in the rhythms of an auction at the Newmarket sales house to which he has devoted his entire working life.

Only those who buy and sell at Tattersalls will have encountered him, since Mitchell, the company’s Director of Bloodstock Sales, never takes to the rostrum. Instead he works discreetly behind the scenes as the company’s troubleshooter.

Countless potentially damaging scenarios have been diffused by the man who describes himself as “a people person.” Mitchell deflects his own efforts, maintaining that such instances are few and far between, yet anyone who has been part of the sales process will recognise the huge scope for disputes within the highly-charged atmosphere of the auction ring.

“I knew you were going to ask for examples but my mind goes completely blank when I try to think of specific cases,” he protests. There is a faint, flicker of a smile as he says this, which is only to be expected. Mitchell has not worked his way up from bottom rung to company director at the conservative sales house by peddling indiscretions.

Perhaps he is fortified by a hereditary understanding of the havoc such tales can wreak. His father inherited the West Sussex Gazette, a provincial, family-owned newspaper that was founded in the 1950s, but there was little chance of Mitchell joining the ranks of its cub reporters.

The legacy of that first visit to the races was so profound that Mitchell resolved to compile his own form book in the year he was due to sit his O Levels. “It was fine in March and April,” he recalls, “but from June onwards there were five or six meetings each day and it would take me beyond midnight each day to keep abreast of it. But I just couldn’t give it up.”

“I can spend hours poring over figures, statistics and lists”

It plainly didn’t do him any harm, even if his father was flummoxed. “Eventually there was a great debate about whether I should go straight into working in racing or to university,” he says. “I was persuaded that university was essential, so I spent the next four years (studying Italian, French and History of Art) at Cambridge.”

That can be only a loose description of Mitchell’s time at one of the country’s high seats of learning. It wasn’t long before the route to nearby Newmarket became well-trodden and, from there, it was inevitable he would venture on to Park Paddocks. 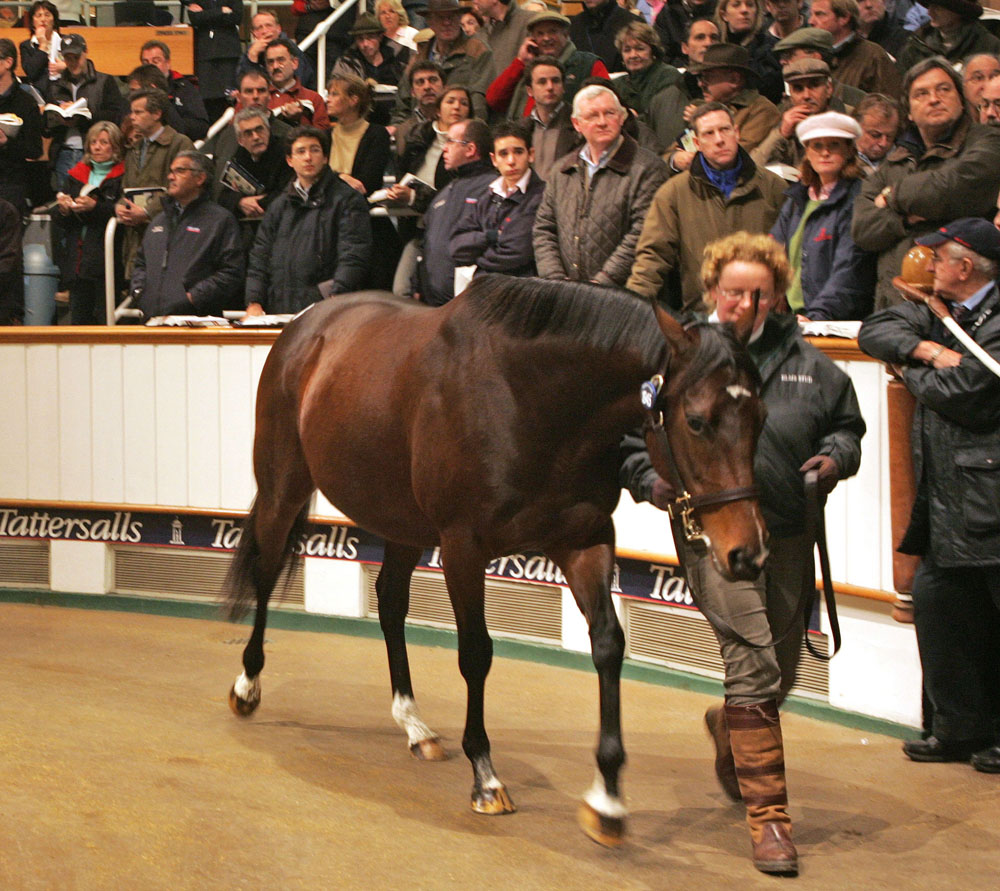 The record-breaking Magical Romance in the ring at Tattersalls

“From that day I became absolutely hooked on sales,” he reflects. “When I left I remember thinking that to work for Tattersalls would be a fantastic job.”

The strength of Mitchell’s yearning is easily illustrated. “When university ended I was stuck without a job so I worked a Christmas at Harrods,” he says. “In those days the Tattersalls office was next door in Knightsbridge Green and one lunchtime David Batten (the sales manager at Tattersalls) came walking through the store. To me, he was the equivalent of David Beckham – I mean, how exciting was that?”

With that, he proffers another smile, this one full-on, in acknowledgement of his somewhat bizarre definition of celebrity. Each to their own – although bear in mind that Mitchell was entirely beholden to a statistical gravitation that makes public auctions such a natural fit.
“I love figures, statistics and lists,” he says. “I can spend hours poring over them.” Curiously, though, he has no time for cricket.

“I absolutely hate it,” he declares. “I must have a built-in antipathy. At school I spent hours in the outfield and when the ball came my way with everyone shouting at me to catch it, I’d invariably drop it.”

In another life Mitchell admits he’d like to return as Peter Snow, who found fame on the BBC with his “Swingometer” at general election time, saying: “I become completely obsessed with (voting) swings ahead of elections.” He is also drawn to athletics on television like a moth to a flame; all those numbers flashing up on the screen represent nirvana.

The first horse he saw auctioned when he joined Tattersalls in 1972 was Motivation, who made 1,000 guineas at the Spring Sale. A wistful flick through that catalogue in the boardroom at Terrace House illustrates how much has changed in intervening decades. The entire 1972 collection of sales catalogues occupies one-third of the space demanded by their counterparts in 2008, the last full year on the bookshelves. That Spring Sale constituted 32 lots; the following July Sale numbered 94 lots, as opposed to the 800 that recently passed through the ring at Tattersalls.

The company itself bears no resemblance to the one Mitchell joined after persuading Alan Taylor, who interviewed him, that the Cambridge graduate who sat before him would be thrilled to bits to undertake menial work in the firm’s basement.

Back then, before Weatherbys generated computer printouts of pedigrees at the touch of a button, vendors were encouraged to fill in a lengthy sales entry form. Mitchell’s job was to check it when it came back. “On the whole people would tell the truth about details like races won, but there were one or two exceptions,” he says with a chuckle.

“A winner of three races might unaccountably become the winner of five. We would put it down to memory lapse, but it was surprising how those lapses seemed to afflict the same people time and time again.”

Some vendors would simply fill in the sire and dam of the horse for sale, leaving Mitchell to spend hours trawling through the legendary card index to flesh out the details.

It was, he maintains, a good education, although not the sort that today’s young Tattersalls interns need concern themselves with. Nor are they joining a company with a profile similar to that which recruited Mitchell 39 years ago, when the Watergate scandal erupted and the price of petrol stood at 9p per litre (not that such a measurement existed, of course).

“When I started at Tattersalls it was a very old-fashioned firm,” he remembers. “It was almost feudal: very much a case of the directors on one hand and staff on the other. I was always ‘Mitchell’, never ‘Martin’; and the directors were ‘Mr Michael’.

“It was pretty Edwardian, even by the standards of the time,” he continues. “It didn’t give anyone working for the company anything to strive for. Having opinions was almost discouraged, but all that changed when Edmond [Mahony, the present Chairman] took over in the 1990s. It gave people from the shop floor the chance to become directors.”

The change in company structure has been mirrored by events in the sales ring. Mitchell recalls being at Tattersalls in his undergraduate days to see the first 100,000-guinea yearling sold at Park Paddocks.

“At the time it seemed an extraordinary thing but the average at last year’s October Book 1 sale exceeded that for the 450 yearlings sold,” he says.

What’s more, those prices were achieved during the height of the economic downturn. Yearling values have maintained remarkable growth in the last four decades even if they cannot match the hike in petrol prices.

Venture that the increase in bloodstock values must have equated to an increase in Mitchell’s troubleshooting duties and he demurs once again. “Big disputes do arise from time to time, but they are few and far between,” he claims. “I step in only if it looks like getting nasty, and most of them are resolved without going to court.”

The most frequent tend to involve post-sale wind-test procedures when vets can make contrasting diagnoses. In adjudicating, the Tattersalls panel has the final say and Mitchell is more than happy to stand by a process he believes is entirely fair.

“You have to be quite strict and straight down the line,” he says. “It can be very dangerous to offer chinks of light; to say to someone, ‘We’ll have a look at this, or we’ll try that’, because in the end the rules must be enforced and the issue is usually resolved in time.”

There is no telling what sort of conundrum Mitchell might have to resolve during sales time. Tattersalls’ staff are always vigilant when auctions follow on from racing at Newmarket.

“That’s when we occasionally get people in the ring who are either drunk or mad,” he laughs. “The most worrying thing is when you get a man bidding on his own, with no-one else around him. That’s when you think to yourself, ‘Oh My God’.”

Of the highlights, Mitchell nominates the 1986 Jim Joel dispersal as a personal favourite. And the sale of Magical Romance, for a record 4.6 million guineas in 2006, was the stuff of fantasy.
“There was a wonderful atmosphere that evening,” he remembers. “The ring was packed but silent; the auctioneer had the entire audience in his hand. Some people don’t like our auctioneering system but it does lend itself to fantastic drama.”

Mitchell takes with him a treasure trove of happy memories into retirement, although this convivial character will be around Park Paddocks for a while longer in a consultancy role. He will also remain as a director of Tattersalls Ireland for a further year, in addition to assuming the post as Chairman of the trustees at the British Racing School.

And he hopes to become more involved with the Darley Flying Start, where his enthusiasm, undimmed after 40 years, cannot fail to transmit to the students.

Mitchell himself needed no such encouragement in his student days. It’s rare to encounter someone whose career unfolded exactly as they had envisaged in their teenage years – much less one who has no regrets whatsoever. 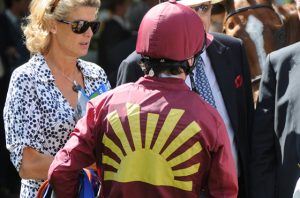