Five-year-old Mischievous Milly has had just four runs to date but she’s turned plenty of heads since her debut last May, not least with her back-to-back wins at Fakenham and Taunton in December.

The latter of these, in the Listed Totepool.com Mares’ Novices’ Hurdle, earns the daughter of Old Vic the third OLBG Mare of the Month Award. Staff at trainer Oliver Sherwood’s yard will share in a £1,000 prize while the trainer himself receives a memento from the sponsor.

Stefanie Reeve of OLBG said: “There have been some really good performances from mares this jumps season, and the judges were also really taken by Kentford Grey Lady’s win at Sandown under top weight against the geldings. Swing Bowler’s handicap win was also impressive and I wouldn’t be surprised to see her pop up in a Cheltenham Festival handicap, and of course Tweedledrum’s two wins at Ascot and Kempton caught our attention too.”

Mischievous Milly was bred by the late John Fowler who enjoyed great success with the family, which also includes Banjaxed Girl, whom he co-bred with Robert Chugg.

“It’s really appropriate that she should win this award as this has been a really good fillies’ family,” said Fowler’s son Harry. “Dad bought her grand-dam Chattering for a client from Robert Chugg but then got left with her, so he trained her and she won eight races. Mischievous Milly’s dam was named Jennifers Diary after my mother and I was allowed to practice my riding on her so she never quite won!”

Mischievous Milly is the second foal of Jennifers Diary, a daughter of Supreme Leader who is currently in foal to Court Cave. At Rahinston Stud in County Meath, the Fowlers also have her three-year-old daughter by Flemensfirth and a two-year-old filly by Robin Des Champs. 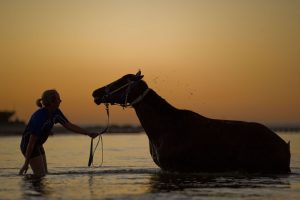 Up Next
Black Caviar sails through gallop