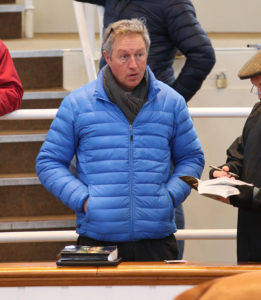 The outstanding season enjoyed on the track by Derek Veitch’s Ringfort Stud translated into auction ring success at the Tattersalls December Foal Sale on Friday afternoon with the sale of a Belardo half-brother to Gimcrack Stakes winner Minzaal for 280,000gns to Alex Elliott on behalf of Amo Racing.

The colt and his high-flying sibling were bred by Veitch out of the unraced Clodovil mare Pardoven, herself a homebred half-sister to the Group 3-placed pair Firebet and Seeking The Prize.

“It is brilliant for us,” said Veitch. “We have had a superb racing year, and this has just topped it all off. It is nice to be able to have bit of success on the track and then bring a couple of nice foals here; and everyone sort of expects to see them now.

“It is nice when people support you, and some very good people did – I think Angus Gold was underbidder. I am very appreciative of everybody, it is a huge thing to get that sort of money for a foal.

“We have always been foal sellers and always going to be, and we are never going to change. If someone buys him and and makes money that’s great. It never worries me, all I am concerned about is the bottom line. If you are making a profit with a foal who is born in March and sold in November, then great – there is less risk, no insurance and they are prone to committing suicide!

Elliott was acting on behalf of owner Kia Joorabchian’s Amo Racing, who has good reason to target Belardo’s progeny given he campaigns one of the sire’s best performers, Group 3 winner Lullaby Moon. 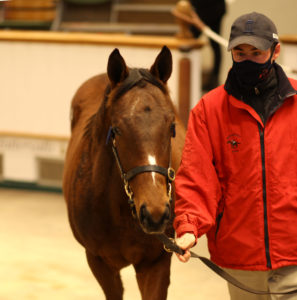 “We had Lullaby Moon by Belardo this year who won the Redcar Two-Year-Old Trophy and the Group 3 Prix Miesque,” said Elliott. “She will head to the Fred Darling next year and could be Guineas filly.

“I thought this colt was flawless, he vetted perfectly. He is a half-brother to the Gimcrack winner who showed phenomenal speed then, and is a very very good horse.

“We stretched to buy him, but if he had been here as a yearling he’d have been even more. It is great that we have got him. The dream when we buy anything is Royal Ascot, we hope in a few years that he’ll be for that.”

He added: “Once you get the pinhookers out of the way there are few principals, and if you are patient enough and can take a long term view, which is what Amo do, I think you can buy value. I am not saying at 280,000gns he is value but, if it all fits, which it has a license to do, we are in with a right chance.” 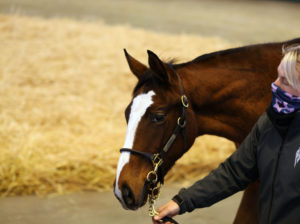 Up Next
Saxon Warrior finding favour at Tattersalls