Until Friday no trainer in the history of the Festival had ever captured the Champion Hurdle, Queen Mother Champion Chase and the Gold Cup in the same year. Henry de Bromhead became the first to do so as his sensational week was crowned by Minella Indo’s victory in the Gold Cup on Friday.

Minella Indo was in some ways the forgotten horse of the De Bromhead stable, with many drawn to his stablemate A Plus Tard, the mount of Rachael Blackmore who had enjoyed a fabulous four days at Prestbury Park.

Yet Minella Indo should have been given more consideration having previously won the Albert Bartlett in 2019 and finished second in the RSA Novices’ Chase last year, when Champ flew home to claim the prize.

Bryony Frost ensured the race was run at a true test under Frodon with Kemboy and Black Op for company. The early pace was proving too hot for Nicky Henderson’s charges with JP McManus’ Champ making a serious of errors that led to him being pulled up before the seventh fence.

Santini didn’t last much longer for Henderson, as he was pulled up with the rest field heading into the back straight for the second time.

All the while, Jack Kennedy had Minella Indo positioned behind the leading trio as Blackmore and A Plus Tard were nestled alongside the two-time defending champion Al Boum Photo.

Blackmore looked to have the measure of Al Boum Photo as they field headed towards the home turn, closing the door on Paul Townend’s charge, and that left the De Bromhead pair to fight out the finish.

But there was no catching Minella Indo as he jumped the final two fences in great style and showed no signs of the idling that had caused him to lose the RSA in 2020. A Plus Tard came back at him but Minella Indo found more to pull clear to win by one and a quarter lengths. Al Boum Photo finished third. 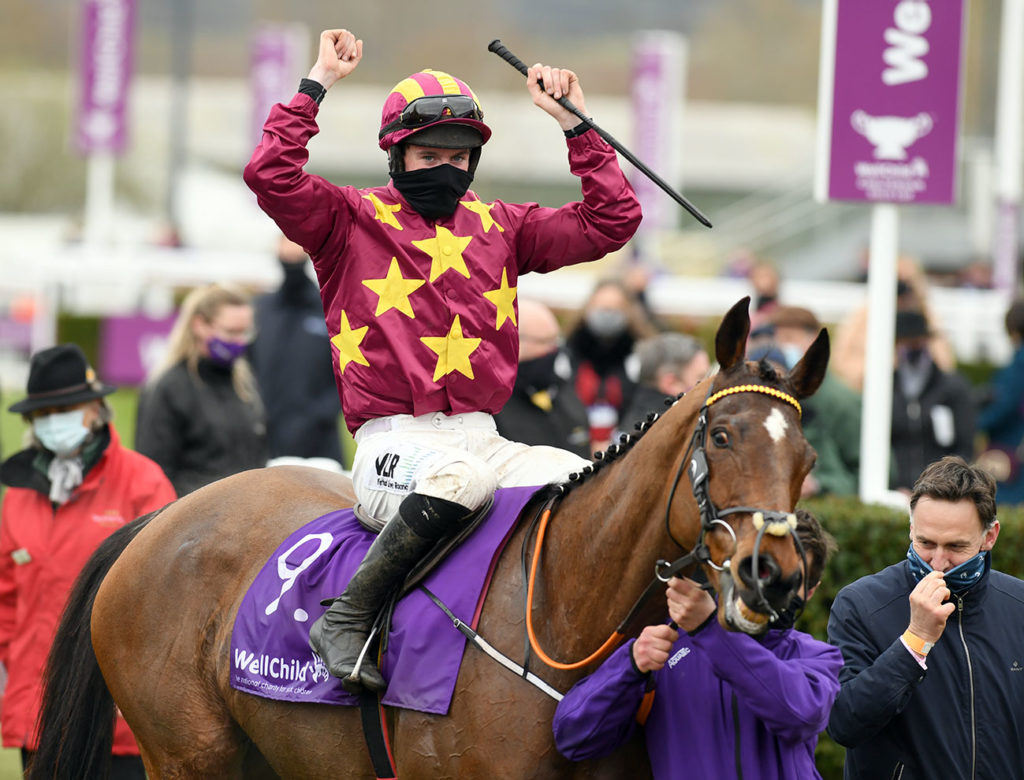 That sealed a one-two for de Bromhead, who had earlier captured the Champion Hurdle with Honeysuckle and the Champion Chase with Put The Kettle On, and finished the meeting with six winners.

De Bromhead said: “I think I’m still in the hotel – it’s Monday night and it is the start of the week and nothing has happened as of yet, it’s mad!

“I keep saying it’s amazing but it genuinely his. I was looking at him [Al Boum Photo] thinking he is going to stay on. Jack was brilliant on Indo. He is just such a tough horse. To see him pricking his ears after the second last was great, but it is all down to the crew at home and here.

“They are working so hard and it’s brilliant. The support of all our clients is brilliant. He certainly did [travel well the whole way through]. Whatever it is about here, it is a bit like Put The Kettle On, he just comes alive. He is fast asleep at home on a daily basis. Even saddling him there he was like he was before the Albert Bartlett kicking the back wall. He was so up for it.

“It’s massive and the Gold Cup is what you dream about winning. Any of these races, winners at Cheltenham, I can’t tell you how much they mean, you just dream about it.”

Kennedy, for whom this was a first Gold Cup winner, added: “It’s definitely the best day of my life. You dream about winning those sorts of races when you’re a child. I know I’m still young, but I suppose I have been in the position where I could have been winning them for a couple of years, so to get it done is brilliant.

“I thought I had as good a chance as any horses in the race, too be honest. I had gone down to school Minella Indo at Henry’s, and a few of the lads in the yard were keen on him, so I was fairly confident going out on him. I suppose the fact that Rachael picked A Plus Tard probably took the pressure off, as well.

“I had to switch in and out a couple of times during the race because I wanted to get my lad a clear view of his fences without going too wide at the same time. It went very smoothly; he travelled and jumped great and there wasn’t really any point in the race that I wasn’t happy.

“I was left in front very soon though and he pricked his ears after the last, but when A Plus Tard came to him, he went on again. I suppose turning into the straight I knew it was going to take something fairly good to beat him, and although I was there too soon, I didn’t want to disappoint him by taking him back and waiting a bit longer with him. I was very confident the whole way.”

We are fast running out of superlatives to describe Rachael Blackmore’s talents at this year’s Cheltenham Festival and while she was unable to add the Gold Cup to her clutch of victories, she created history as the first woman to take home the leading jockey award.

It was her win on another de Bromhead horse in the shape of Quilixios in the Grade 1 JCB Triumph Hurdle on Friday that sealed the deal as they got the better of Adagio to record an impressive three and a quarter length success.

Reflecting on a week that has seen her rise to the fore and conquer all those before her, Blackmore said: “It’s phenomenal. I can’t even comprehend being leading jockey at Cheltenham – that’s crazy stuff. It’s been brilliant. Henry de Bromhead is an incredible trainer. I’m just part of that team and getting on those horses. 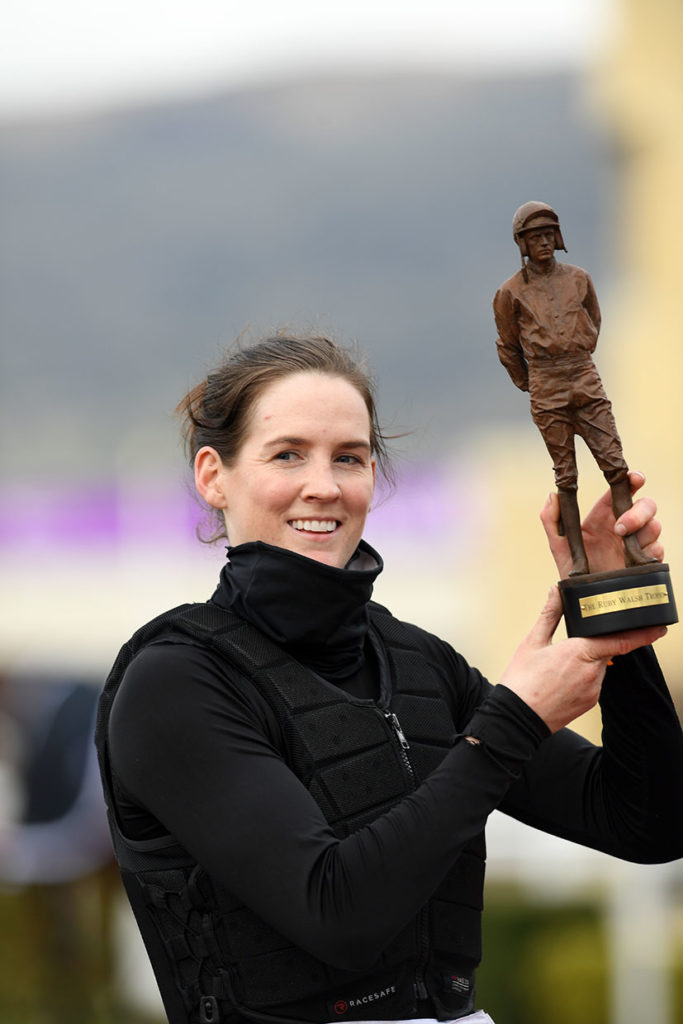 “Honeysuckle is definitely the stand-out moment. She is extremely special, and she was phenomenal in the Champion Hurdle.

“Getting an award from AP McCoy in the shape of Ruby Walsh is crazy. I just walked into the weighing room earlier on and I saw my mother on TV – I don’t know how that happened, but they are getting a great kick out of it at home.”

On riding six winners she added: “I was hoping I would get one and every jockey thinks that, but when that happens it’s some weight off your shoulders and everything is a bonus after that.”

Cromwell on the board again

The Irish domination continued at Cheltenham with trainer Gavin Cromwell celebrating a second winner of the week when Vanillier hosed up in the Grade 1 Albert Bartlett Novices’ Hurdle.

It was an impressive performance from the six-year-old son of Martaline, who had lost his way since winning a maiden hurdle in November and was last seen finishing tenth behind Gaillard Du Mesnil in a Grade 1 novice hurdle at Leopardstown last month.

Cromwell said: “I wasn’t sure how he was going to act on the better ground; he’s been running on heavy ground in Ireland all year, and he’s quite a slow horse, but Mark [Walsh] said he travelled with loads of enthusiasm today. He lined him up good and handy, because we thought he might struggle to travel early, but he showed an extra gear there that he hasn’t shown before, and we know he stays really well.

“I’m not surprised he’s won, but I am surprised by the manner he’s done it in. The ground at Christmas at Limerick was absolutely knee-deep and he got a little bit lost in the middle part of that race and stayed on very well at the finish.

“He subsequently had a small wind op and went to the Dublin Racing Festival and ran no race. All my horses seemed not to run well at all there – they came home, and they just weren’t right – but he’s bounced back great. He’s more than likely to go straight to chasing next year. He’s a proper staying chaser.”

By the conclusion of the Festival, Ireland had swept aside Britain in the Prestbury Cup with a whopping 23 winners to five. 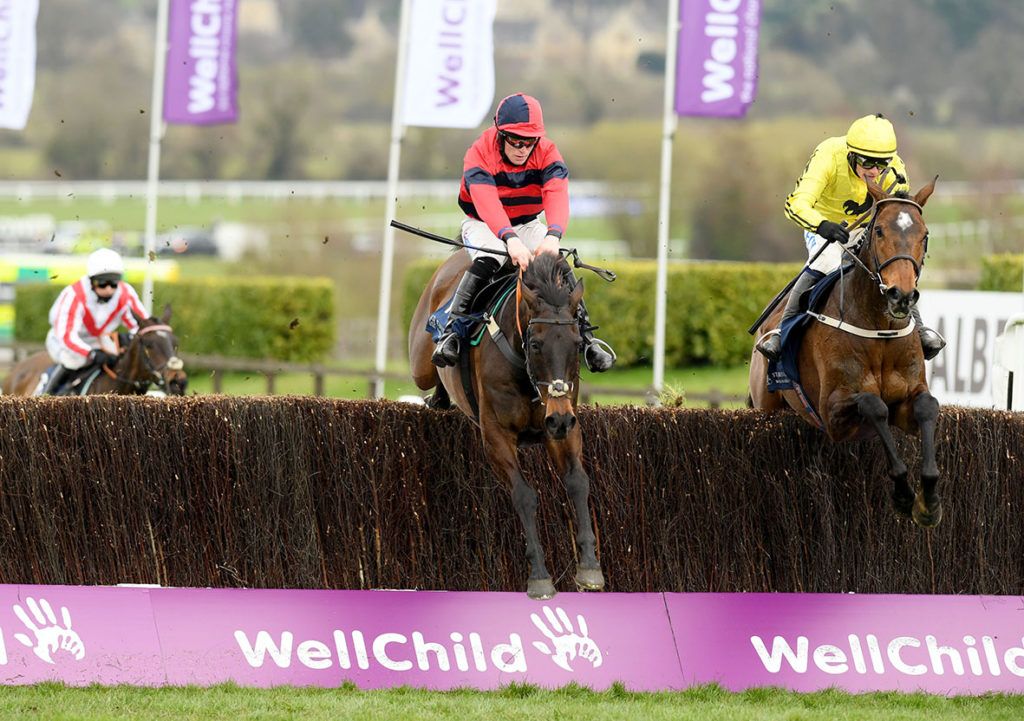 Britain strikes back with Porlock Bay

It has not been the best week for British-trained runners but the home side struck back on Friday when trainer Will Biddick and jockey Lorcan Williams masterminded the victory of Porlock Bay in the Hunters’ Chase.

In a superb finish, Porlock Bay held off favourite Billaway to win by a short-head to secure Biddick his maiden Festival winner as a trainer.

He said: “I just can’t tell you what’s gone through my body in the last five minutes. I was in bits watching that. I was running up the side of the course with Lorcan, just screaming and I was in tears, I was a right softy!

“I’m so glad for Lorcan and John Studd the owner. It’s not just me, it’s a big team in the yard and a lot of boxes to be ticked to get here today. We were grateful just to be here today, so to top it off with that is phenomenal.

“He has spent most of his life in France, so right from the start it was the plan to come here. We haven’t done Plan A to get here and to qualify, it’s been mixed with Covid and waterlogging, but for whatever reason, it’s worked and the result today… I promise you, I’m in pieces right now!”

Williams, who was also recording a first Festival honour as a jockey, added: “He jumped the last really well. He was having a little bit of a wander up the run-in as it is quite daunting. I felt he was doing enough but the line kept getting further and further away. I wasn’t sure who won as I sort of just had tunnel vision and tried keeping as balanced and as straight as I could.

“I was fairly confident I had won but, in those situations [photo finishes] I try not to get my hopes up too much. I know it sounds bad but I’m quite a realist. I always felt I was doing enough but whether the line was on our side I didn’t know.” 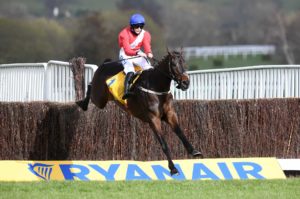 Up Next
Rachael Blackmore delivers again at the Cheltenham Festival