Coolmore’s Mastercraftsman now looks assured of first-season sire championship honours following a banner day in which he sired not only the winner of the Group 1 Racing Post Trophy in the UK but also that of the Group 3 Killavullan Stakes in Ireland.

Kingston Hill followed up on his impressive victory in the Autumn Stakes a fortnight earlier and looked similarly commanding when landing the Racing Post Trophy by four and a half lengths from Johann Strauss, with Altruistic another two and a half lengths back in third.

The two place-getters were both by Derby-winning sires – High Chaparral and Galileo – and the Racing Post Trophy has been one of the best pointers for the Derby in recent years, with High Chaparral himself having won the race in 2001, while Motivator, Authorized and Camelot have also gone on to Classic success after victory in the Doncaster juvenile showcase.

The Roger Varian-trained Kingston Hill, bred by Ridgecourt Stud from the Group 3-winning Rainbow Quest mare Audacieuse, is the sole horse in training at present for Paul Smith, who was active at the recent Tattersalls’ October Yearling Sale, where he signed for two first-crop sons of Rip Van Winkle. Smith is the son of Coolmore partner Derrick Smith, in whose purple and white silks Mastercraftsman used to race.

While Smith senior had to settle for second place at Doncaster with Johann Strauss, he too enjoyed a winner, along with Sue Magnier and Michael Tabor, when Craftsman got the better of stable-mate Michaelmas in the Killavullan Stakes at Leopardstown.

The top lot at last year’s DBS Premier Yearling Sale when sold for £185,000, the Ballydoyle-based Craftsman has now won two of his four starts and has been placed on the other two occasions. Bred by Denis Brosnan’s Epona Bloodstock Ltd, he is out of Weekend Fling, a Forest Wildcat half-sister to Grade 1 Arkansas Derby winner Archarcharch.

In the race for the freshman sire title, Mastercraftsman, whose other stakes winners include Amazing Maria and Pablosky, caught early leader Dandy Man mid-season but recently had to give best to Intense Focus following the Middle Park Stakes win of Astaire. Saturday’s results ensure he is back in front, however, with his 23 individual winners in Europe having amassed a prize-money haul of £624,859 at the time of writing.

Intense Focus, Dandy Man and Bushranger have 17 winners apiece, but Ballylinch Stud’s Intense Focus is in clear second place on prize-money thanks to his aforementioned Group 1-winning son. 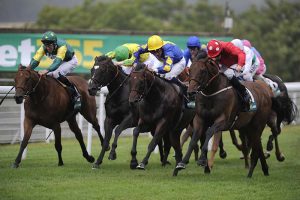 Up Next
British racing to benefit from extra £18m