Master Of The Seas overcame trouble in running to lead home stablemate La Barossa in the Group 3 Craven Stakes at Newmarket on Thursday.

Sporting a hood for the first time, Master Of The Seas was clearly travelling the best as the field headed towards the dip but it looked as if the three-year-old and his jockey William Buick were caught in a pocket.

Thankfully, Buick remained poised to pounce when a gap emerged next to the Aidan O’Brien-trained Sandhurst and once in clear daylight, Master Of The Seas picked up well to get the better of La Barossa

It is the second Group success Master Of The Seas has earned as he landed the Group 2 Superlative Stakes on the Rowley last year before finishing fourth behind Thunder Moon, Wembley and St Mark’s Basilica in the Group 1 National Stakes at the Curragh.

The Godolphin homebred, who is by the operation’s flagship sire Dubawi and out of the Danehill mare Firth Of Lorne, will now look to add the QIPCO 2,000 Guineas to his record next month. Based on Thursday’s performance, he is sure to have a live chance in the Classic.

Buick, speaking to ITV Racing, said: “I just wanted to give him some room so he could run home and go through the gears which he did. It threatened to be a very messy race but the two class horses came through. This will have done this horse the world of good. He was relaxed and did everything right.

“I think he’s a Guineas horse. Only the very good ones manage to quicken down the dip and when they hit the rising ground they go again and that’s what this fella did. When he ran in Dubai he was a bit of a mess and I’m just glad to get him back on track.”

Earlier on Thursday’s card, Appleby, Buick and Godolphin were in the winner’s enclosure as Creative Force bounced back to winning ways to take the six-furlong handicap from the fading Significantly.

Appleby added: “He had a bit of a set-back after the Coventry and sometimes getting them to Ascot is tough on the two-year-olds.

“He is a very genuine little horse as you saw today. He broke his maiden tag here last year. He is a horse that has done well through the winter. He has not grown but he is a strong individual.

“He could get seven [furlongs] as well, which might open up a few options for him. He is entitled to come forward a bit as well. I’m pleased and it was a good performance.

“Whether he is quite good enough for something like a Pavilion Stakes I’m not sure. It will be interesting what we do trip wise as I think he might benefit from stepping up to seven in time and the way he has done it there, there is no reason why he shouldn’t.”

A third winner of the day came for the trio when Al Waqidi held off the fast-finishing Scope to land the ten-furlong novice stakes.

Covered up early as Emaraaty Ana and Oxted set the early pace, Tudhope waited until the final furlong marker to muster the effort from his mount, and he flashed home to win by three-quarters of a length ahead of Oxted. Emaraaty Ana was a head back in third.

It was a second victory in less than a fortnight for Summerghand as he had struck at the All-Weather Championships Finals Day at Lingfield in the six-furlong sprint on the Good Friday card.

Jane Chapple-Hyam looks to have another exciting two-year-old filly in her care after Bellosa was an impressive seven-length winner of the seven-furlong fillies’ stakes that opened Thursday’s Newmarket card.

Sporting the famous colours of Sir Edmund Loder, Chapple-Hyam was delighted with the performance and said: “I knew she was good enough to hit the line, but she was taking on horses who have run before, so that shows her class.

“She’s used the round gallop on the Limekilns for her last piece of work and she was impressive when she went past a good servant of mine, Ambassadorial, and I knew then we had a good one, but she’s never worked with Saffron Beach. I’ve no idea where that rumour came from.

“I’m just thrilled to see how she did it there today and we’re lucky to have two nice fillies in the yard.”

The Wood Ditton Stakes went the way of the John and Thady Gosden-trained debutant Peter The Great in the colours of owner-breeder Anthony Oppenheimer while the Ralph Beckett-trained Bullace took the mile handicap that closed the Craven Meeting for 2021. 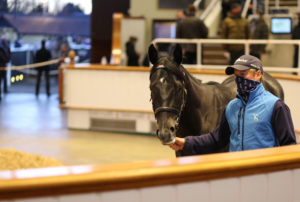 Up Next
Caravaggio colt heads final day of Craven Sale for 240,000gns