By The Owner Breeder staff 26 September 2013

The current healthy round of yearling sales continued this week with a buoyant renewal of Tattersalls Ireland’s September Sale, which posted gains in aggregate (+43%), average (+26%) and median (+30%).

Leading the way at the auction which produced this season’s star sprinter Lethal Force was a yearling whose racecourse targets are more likely to be middle-distance contests. The sale-topping second-crop son of Yeats brought a bid of €180,000, the highest price recorded at Fairyhouse since 2006.

Offered by The Castlebridge Consignment, the colt from the family of Oaks winner Love Divine was bought by The Lily Corporation, whose agent Ananios Antoniadis had also signed for the top lot on the first day of trade, a €110,000 son of Tamayuz out of three-time winner Sandy Lady, a great grand-daughter of Sweet Solera. That colt was also consigned by Castlebridge, who were responsible for the top three yearlings of the sale, the third being a Mount Nelson colt out of Alexia Reveuse bought by David Marnane at €85,000.

The Lily Corporation is the trading name of Ukrainian owner Konstantin Zgar, who has horses in training in Poland. He was leading buyer at the sale, with 12 yearlings purchased for a sum of €512,500. Bobby O’Ryan, who also operates for Polish clients among others, bought the highest number of lots, signing for 24 yearlings in total.

Colts dominated the top-end of the board with the best-priced filly coming in at number 15 when Peter Molony, buying for David Redvers, went to €40,000 for a Camacho filly out of Belle Of The Blues, offered by Rossenara Stud. Sheikh Fahad’s racing manager has enjoyed particular success with Camacho this season, most notably through Flying Childers Stakes winner Green Door.

The pinhooking triumph of the sale came through a Piccolo colt consigned by Baroda & Colbinstown Studs and sold for €50,000 having been bought for 9,000gns at Tattersalls in December. The son of the unraced Cape Cross mare Cape Wood had been selected as a foal by Noel Rasmussen and his friend, Derek Larkin of Biddestone Stud, who sadly died in April. 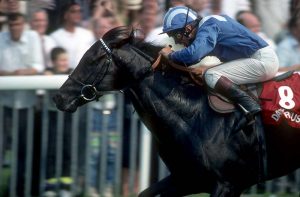 Up Next
Dayjur dies at 26