Up to the Mark
Stories

Many Clouds brings up National double

The Oliver Sherwood-trained Many Clouds provided jockey Leighton Aspell with his second consecutive victory in the Grand National as well as a third triumph in the race for owner Trevor Hemmings when landing the world’s most famous steeplechase by a length and three-quarters from Saint Are.

Sent off at 25/1, the eight-year-old took up the running with the three fences left to jump and had to dig deep from the last to repel a strong challenge from the runner-up. Former Welsh National winner Monbeg Dude took third with Alvarado running on to claim fourth place for the second year running.

Aspell, who won last year’s National aboard Pineau De Re, said: “I tried to conserve energy because he had a hard race in the Gold Cup. It is a wonderful training performance by Oliver to freshen him up and recharge the batteries.

“He is all heart and gave me the best ride I have ever had over these fences. He was awesome and I was just hoping the battery life would last. I took every opportunity to save as much battery power as possible.

Sherwood modestly deflected praise for the victory, claiming he was persuaded to run by the horse’s owner. He said: “I just can’t believe it. He was foot-perfect, I don’t think that he made a mistake. I thought that it was a year too soon [to come here] and Trevor knows that. It was his decision, so he must get all the credit, not me.

“A Hennessy winner and a National winner – it’s sound’s good doesn’t it? Many Clouds has been unbelievable all season, he hasn’t stopped blossoming.
“I have done nothing with him since the Gold Cup, just literally one school and he hasn’t seen a National fence on purpose. I didn’t show him any National fence and literally a couple of quiet bits of work is all we have done just to freshen him up.”

Following the victories of Hedgehunter (2005) and Ballabriggs (2011), Hemmings joins Red Rum’s owner Noel le Mare on the list of owners to have won the National on three occasions.

Speaking after Many Clouds’ emotional win, he said: “It was incredible. I always dreamt, as one would, of winning the Grand National and then we won it. Then we won it for a second time and it was something special, but now the third one comes along, I just can’t believe it. It is an amazing feeling.

“Noel le Mare won the Grand National three times with the same horse and we have done it with three different horses. This race captured my heart and it is such a wonderful feeling to win it again. All I can say is thank you Oliver Sherwood, Leighton and all the staff, and to Aintree.” 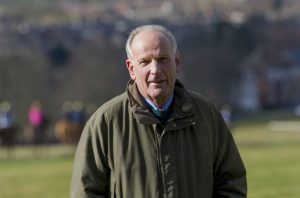 Up Next
Up to the Mark