For the second year running a Malinas foal from Yorton Farm has been crowned champion at the TBA ‘Stars of Tomorrow’ National Hunt Foal Show at Bangor-on-Dee racecourse.

The one difference this time around was the winner was a filly. The daughter of the unraced King’s Theatre mare Madam Jolie was bred by Pauline Cowey, who keeps three broodmares at her home near Whitby, Yorkshire.

“I was delighted when she won her class – I’d have been pleased just to see her placed,” said the breeder. “But then to go on to the championship and top the show was just wonderful. This is the first filly the mare has produced, she’s had two colts so far, so I hope to keep this filly to race.”

The reserve champion was the winner of the older colts’ class, a son of Scorpion out of Bling Noir, a French-bred mare by Moscow Society. The colt was bred by George Stanners of DBS who also proved to be a very adept handler in the show ring.

The younger divisions, for foals born on or after April 15, were won by Cobhall Court Stud’s Shirocco colt out of Gaye Sophie and a Martaline filly out of Valleyofthedolls, who was shown by her breeder Goldford Stud.

This was the second year the show has been held, following on from a successful debut, also at Bangor, last summer. Reflecting on the day, which saw 49 foals shown across four classes, TBA Chief Executive Louise Kemble said: “It was wonderful to see such an impressive turnout and the show so well supported by all exhibitors. We’d like to reiterate how grateful we are to everyone who helped make this yet another successful event for the National Hunt world and we look forward to seeing it grow again next year.”

For a full report and pictures from the day, please see the September issue of Thoroughbred Owner & Breeder. 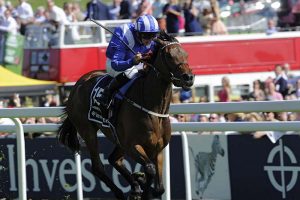 Up Next
Taghrooda lands King George