McConnell gets another one
Stories

Coming from a family with no racing connection – your dad invests in property and your mum is a self-employed jeweller – what first attracted you to the sport?

Living near Cheltenham, with its amazing racecourse, was the biggest influence. I also had a granny who was big into hunting and dressage, an auntie who was into eventing and I had horses around me when I was young. It certainly wasn’t the glamour that attracted me; it was the horses and I enjoyed what riding I did.

I got a bit of the lure of speed from dad, who had been a rally driver. We never really had ponies until I was 12 or 13, so I was a late starter. But I did nick rides on other people’s ponies when I could!

You used to bunk off school to go racing at Cheltenham. Did you ever dream of joining the ranks of jump jockeys or was your heart set on the Flat?

I was interested in becoming a jump jockey up to 14, when I was still going jump racing. I didn’t go Flat racing until I’d turned 15 and that was at Newmarket for the Guineas to watch Dawn Approach beat Richard Hannon’s Toronado [fourth]. I think my size had a big say in my future as a Flat jockey, though I had ridden out for Jonjo O’Neill, who was ten minutes away, as well as a couple of local point-to-point yards.

Tony Carroll was the nearest predominantly Flat yard and I rode out for him. Growing up as a kid I had great admiration for the jump jockeys, who were more like idols coming in at Cheltenham covered in blood, mud and sweat. AP McCoy trotting back down the chute after a big chase is a typical scene that stays with you from those early days.

After pony racing you joined the Richard Hannon stable as a 16-year-old. What was your first impression of this huge operation – and is it a case of sink or swim in such a competitive environment?

I was all set to join Andrew Balding but my girlfriend’s [Hollie Doyle] dad, Mark, who worked at Hannon’s, told me I must join him. I spent a week there and decided to stay, though the Balding stable and whole operation is renowned, particularly for apprentices. The magnitude of everything that goes on at Hannon’s is pretty spectacular with 250 horses.

I turned up on my first week and my lots included Tiggy Wiggy, Sky Lantern and Night Of Thunder – there were just loads of good horses and that’s what you go to big yards for. I was the seventh apprentice there when I turned up – it certainly was a case of sink or swim.

It was pretty daunting being in such a massive operation, even though it’s split into two yards at Herridge and Everleigh. The whole experience was a dream come true.

Your rise has been meteoric: first winner in 2014, champion apprentice in 2015, 100 winners in 2018 and you even made the top three in BBC’s Young Sports Personality of the Year. How do you keep your feet on the ground?

I don’t think you have to try too hard because racing does it for you. Every jockey, trainer or owner would tell you that racing is a great leveller. I’ve always been a strong believer in the saying ‘you get out what you put in’. By the nature of the sport with its falls, injuries and losing runs, racing would put your feet back on the ground pretty quickly. I don’t mind being in the public eye.

The expanding television coverage and social media is raising the profile of jockeys, which is no bad thing. The media publicity given to racing is good but still a long way behind the coverage of other sports, though Sky Sports Racing have recently introduced encouraging minor changes like jockey and trainer focuses – and they don’t highlight the betting so much.

Last year you had over 950 rides for 120 different trainers. You have described it as an “odd life”, driving hundreds of thousands of miles while constantly watching your weight. What is the hardest part of trying to become a top jockey – and what does a 20-year-old have to sacrifice to focus on a jockey’s life?

The road miles take their toll. But I was lucky at the start of last season when my sponsor Markel supplied me with a Mercedes E Class, which took a lot of the strain out of driving. Markel let me select a few extras which meant the car almost drives itself on the motorways, while in traffic it lays up with the vehicle in front and does its own stop-start, stop-start. I just leave the car to it.

Obviously, constantly watching your weight when you’re riding six or seven days a week all year round can be stressful. This year my trip to Australia helped to break it all up. It’s good to enjoy a short spell when you don’t have to be so regimented about everything. I don’t feel I am making sacrifices because I am enjoying what I’m doing. I would be making a sacrifice if I had to give up racing. Hollie and I have been together for a few years and neither of us is a party-goer, and we hardly drink at all.

How much better off are you following your visit to John Moores University in Liverpool to learn about the body, fitness and diet, and mental health?

I found it interesting – I enjoy studying sports science. I stayed on the John Moores diet for about a month and then continued with a number of their ideas, which I follow as guidelines. I try to live with the high protein/low carb diet to a sensible degree so that by Sunday, within reason, I can enjoy something different without threatening my riding weight [minimum 8st 6lb]. I think I’ve found a pretty good balance between enjoying myself and not getting too paranoid about it all.

I go to the gym three times a week during the season and feel healthy and strong. As far as mental healthis concerned, most of the time I view matters on the positive side. I don’t let myself get worked up by things that aren’t worth worrying about. Obviously, more significant situations demand time and thought, but that’s it.

What has been the high point so far, and what made it so special?

Becoming champion apprentice in 2015 and getting into the last three in the BBC’s Young Sports Personality of the Year. I really enjoyed the pressure of battling with Jack Garritty for top apprentice; the whole experience helped me to mature as a rider and as a person. I beat Hollie a short-head on one of my winners on the last day and that added to the whole occasion. She shouted to me, ‘You’ve already won the title, at least you could have let me win!’

Looking back at the magnitude of the Young Sports Personality competition, I now realise what it meant. James Bowen is the only other jockey to have been among the contenders and that was largely as a result of our pony racing and having good people around us. 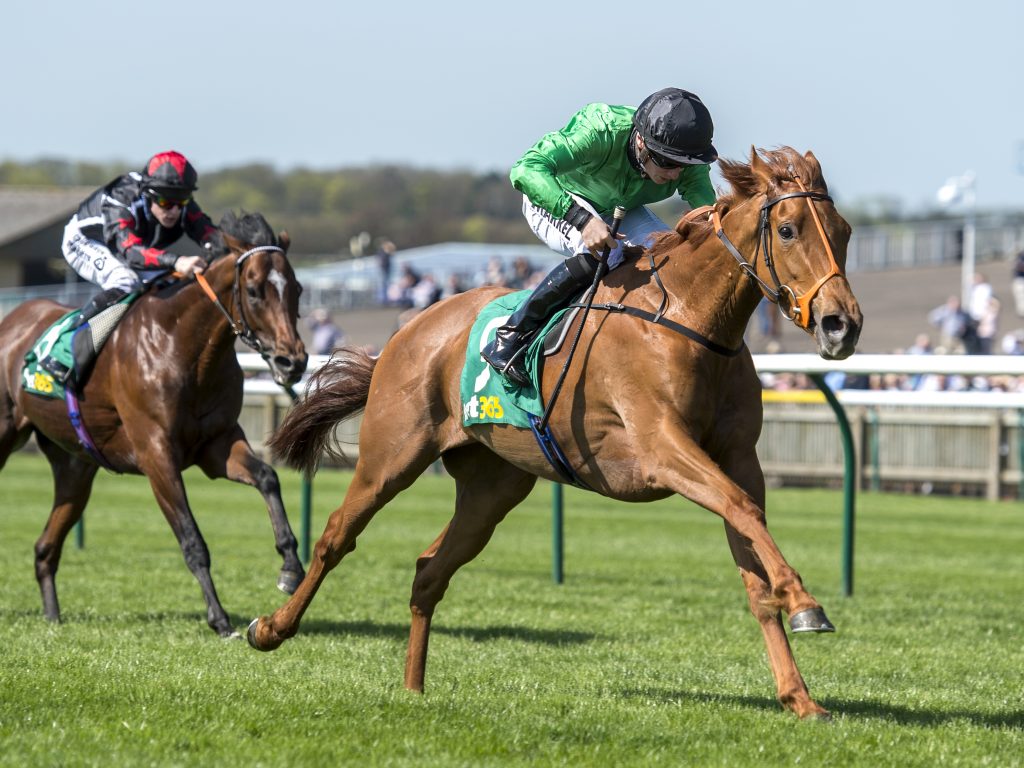 You share a house with your girlfriend and fellow jockey Hollie Doyle, who also works for Richard Hannon. How competitive are you both racing against each other?

It’s fantastic to see Hollie doing so well. She had a quiet spell after losing her claim but enjoyed a good summer last year, which was great. She has ridden a Listed winner already this year and is attached to Archie Watson’s stable in Lambourn. She flies out to France on a regular basis to ride Archie’s horses there and is enjoying the job.

We do discuss our rides and both know when we’ve got it wrong; that’s when it’s mostly left unsaid! Hollie is under 8st, eats like a horse and trains hard as well. She works in the gym to put on weight, while I’m trying to lose it.

How do you both spend any downtime or a complete day-off together?

Sleep! Usually it’s a pretty sedate day because we are so busy all the time. But there are some nice places locally to go out for a meal, which we enjoy. We always get in a bit of holiday when we can and went to St Lucia before I left for Australia last year. We also have fun skiing.

Have you modelled your riding style on any jockey in particular?

Not really. Since starting pony racing, I’ve always ridden in my own way. I’ve watched some lads and thought they looked strong and stylish. But I’ve never tried to model myself on anyone; I just left myself to be as natural as I can, trying to look the best, smoothest and strongest.

By 17 I’d lost my claim and at that age I wasn’t as physically developed as most of the jockeys, so I was aware of having to stick it to the professionals by making sure I was doing enough in the gym to give me the strength to compete at all levels.

You have listed your alternative career as ‘chef’. Are you the cook at home, and if so, what do you like to produce?

I’ve always enjoyed cooking and if I wasn’t in racing I’d like to have been a chef in a ski chalet. I used to do a bit of cooking at home with mum and, as Hollie doesn’t like cooking, I get to do it and that works out well. Whatever I cook, Hollie has double portions!

You went to Australia for a six-week racing break over Christmas and New Year to ride for Sydney trainer John O’Shea. What is the biggest difference between riding in the two countries and what did you learn from the experience?

The way the races develop with half a mile still to go, all the jockeys are shuffling for positions. If you miss the boat or your gap, you’re left for dead. Being aware of that sharpness mid-race does help. In England a race settles down until everything comes off the bridle a furlong and a half out.

The Australian experience has helped my riding on the all-weather and with a bit of luck it will translate to the turf even better. You have to be sharp, alert and have pace awareness much earlier down there.

They do a lot of things a lot better than us, particularly the tote-backed prize-money, which is phenomenal. We are lagging a long way behind, but can still boast a great depth of racing with a phenomenal base of trainers, owners, jockeys, tracks, studs and an amazing level of horses.

We have so much going for us, but we’re running round for peanuts and that brings the sport down in the eyes of other racing nations.

What is your goal(s) for 2019 and can you give us a couple of horses you are looking forward to riding?

I want to pass 100 winners again and try to find a good horse, or horses, that take me to the next step up the ladder. There is a big gap between everyday jockeys and the top flight. I am looking forward to riding a couple that may go under the radar but could still make it at the higher class: Urban Icon, who was unbeaten in two races at Windsor and Salisbury, and Dirty Rascal, a winner at Windsor and Newbury and second in a sales race at Doncaster. 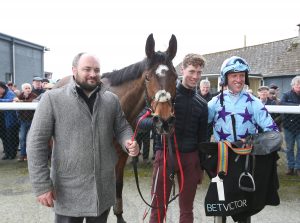 Up Next
McConnell gets another one