She came, she saw, she conquered, again – the mighty Honeysuckle recorded her second Grade 1 Unibet Champion Hurdle triumph under Rachael Blackmore on Tuesday to preserve her unbeaten record under Rules, which now stands at 15 races.

Covid may have kept the crowds away from the Cheltenham Festival in 2021 but they were back in full force this year as a full house roared its appreciation of Ireland’s hurdling champion.

Kenny Alexander’s mare, bred in Britain by Dr Geoffrey Guy at The Glanvilles Stud and trained by Henry de Bromhead, was posted wide under Blackmore in the early stages but travelled well into contention and took the lead two out.

Quickening off the home bend, Honeysuckle put her head down and ran on bravely under her jockey’s urgings and while 2020 heroine Epatante gave valiant pursuit, she never looked like reeling in Honeysuckle, who crossed the line three and half lengths in front, becoming the first mare to capture the Champion Hurdle on two occasions. 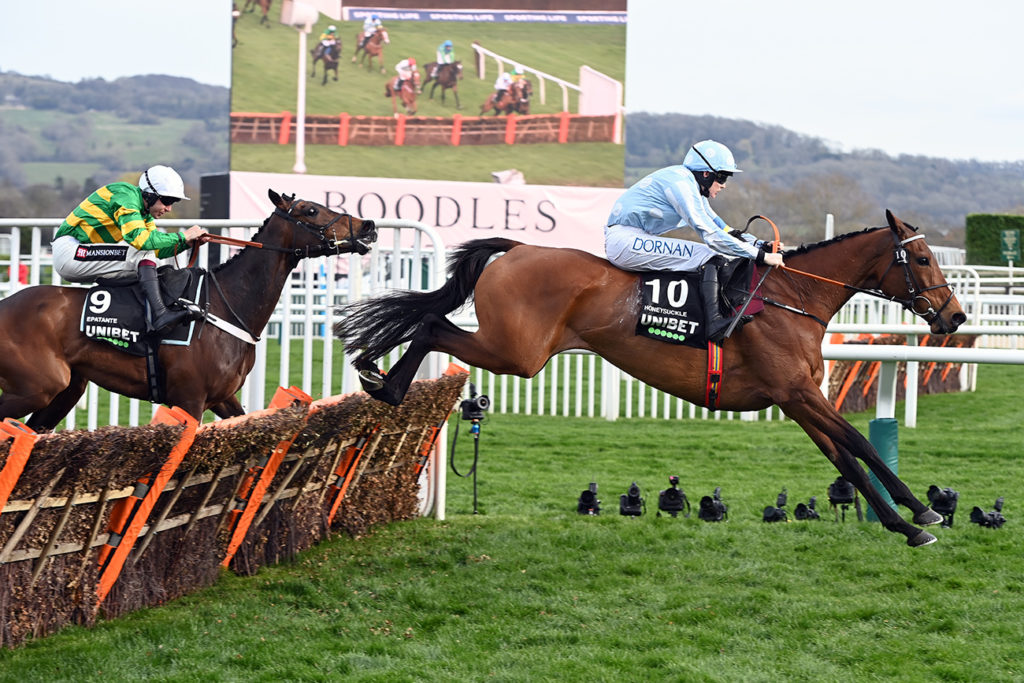 A thrilled Alexander said after the race: “If you don’t get nervous today what is the point of running them? I always get nervous even if I’m running one at Carlisle or Tramore. Today we well revved up and it was a case of let’s rock and roll. I’ve got my wife here as well. It is a very special day. I’m glad all the crowd were here as well.

“She is a dream horse. It is better [having the crowd with you] than against you. It is just fantastic. We’ve been over in Ireland a couple of times to see her, and she got a great reception, and she got another one here.”

De Bromhead said: “It is unbelievable. It is better than last year with the crowd here and Kenny and Caroline and everybody. It’s amazing. It is a never-ending fairytale. It is incredible. I just really hoped that she could get that Cheltenham roar and it is fantastic that she has got it. She got it in the Mares’ Hurdle but for this she missed out last year it is amazing.

“It is brilliant for our team and everyone. Rachael was sublime and I can’t believe it, as usual. She is just amazing and we are so lucky to have her. I did feel the pressure more with the build-up. The dream result was her winning with Rachael and the crowd being back here to give her that roar.”

Not many races are won by 22 lengths anywhere but to do so at the Cheltenham Festival requires an outstanding individual – step forward Constitution Hill, sensational winner of the opening Grade 1 Sky Bet Supreme Novices’ Hurdle (2m) under Nico de Boinville in the silks of Michael Buckley.

The result was yet another testament to the training talents of Nicky Henderson, who not only supplied the brilliant victor but also runner-up Jonbon for owner JP McManus.

It was a race of two halves as Dysart Dynamo and Jonbon vied for the early lead with Constitution Hill settled off the contested pace in third, with a long gap back to the other six runners.

As the leaders raced down the hill, Constitution Hill, bred in Britain by Sally Noott, looked to be travelling immensely powerfully in the hands of de Boinville, who switched his mount inside to challenge between runners approaching the third last hurdle.

That proved to be an inspired move as Dysart Dynamo crashed out under Paul Townend, leaving the two Henderson runners with the race between them, so far clear were they of the rest of the field.

Asked to put his seal on matters after jumping the second last, Constitution Hill galloped right away from his stable companion, producing a fine leap at the final flight and staying on strongly up the hill to record his wide-margin victory. 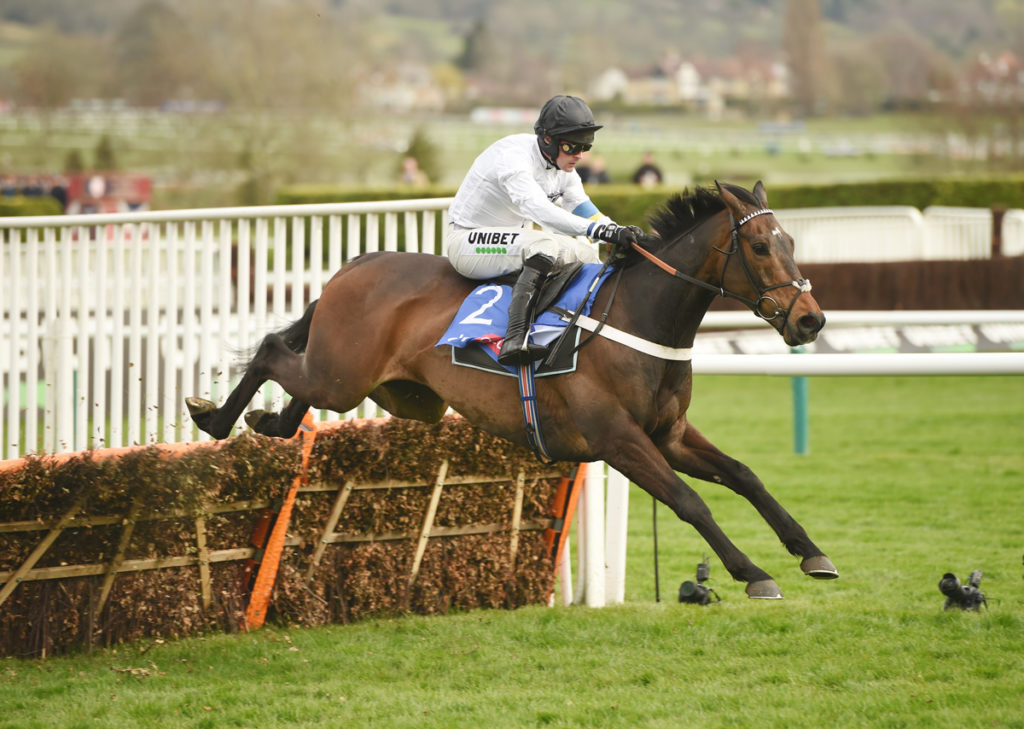 “That was awesome,” Henderson said after the race. “I know what the second horse is and I would have been very surprised if anything could do that to Jonbon. He [Constitution Hill] must be an extraordinary animal.

“The hype horse earlier in the year was Jonbon, then this fellow woke up from his slumber at home and we realised he was very good. He’d only run in two hurdle races [before today] with four runners in each. To go out there and go at that gallop – that’s the extraordinary thing, he can travel so easily at that pace and then pick it up. To find gears at the end of a gallop like that is extraordinary.”

Buckley said: “It wasn’t very stressful at the end, but I was shaking like a leaf. Coming back in I was walking behind Nicky – I’ve been doing that for quite a few years of my life, not always happily, but today I’m ecstatic. Nicky is a genius.”

Nicky Henderson and Nico de Boinville made it a Grade 1 double later in the afternoon when Middleham Park Racing’s Marie’s Rock produced a fine change of gear after jumping the last flight to outpoint Queens Brook in the Close Brothers Mares’ Hurdle (2m4f).

Nimble Edwardstone foot-perfect in the Arkle

The Grade 1 Sporting Life Arkle Challenge Trophy Novices’ Chase (2m) was another victory for a runner bred, owned and trained in Britain as Edwardstone recorded a decisive success under Tom Cannon, celebrating his first winner at the Cheltenham Festival.

Trained by Alan King for owner-breeders Robert Abrey and Ian Thurtle, Edwardstone was coming into the race off the back of four straight wins and made it number five with the minimum of fuss.

Brave Seasca’s fourth fence fall caused one anxious moment for the eight-year-old’s supporters, but he nimbly sidestepped out of the way and continued to jump and travel well in midfield in the two-mile contest, as the mares Magic Daze and Riviere D’Etel set the fractions.

Edwardstone jumped into a clear second at the third last fence as Cannon sent his mount in pursuit of Riviere D’Etel and Jack Kennedy. Despite a brief coming together in the air at two out, Edwardstone quickly asserted his superiority and after a good leap at the last fence, he ran on strongly up the hill to see off Gabynako by four and a quarter lengths. 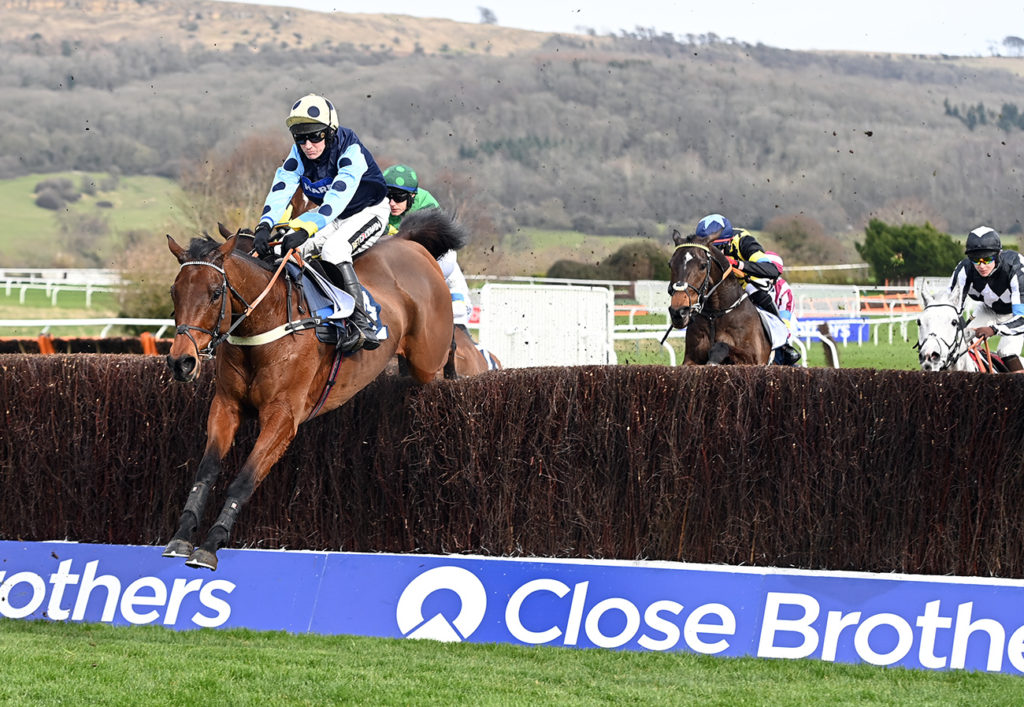 The winning trainer said: “We missed the carnage at the third. I was only half watching at the time, but I thought we could have easily been brought down there. Maybe luck was on our side, but he has done it really well and Tom has given him a cracking ride.

“It is great to see Tom win as well. He is riding out of his skin at the moment. He had a double yesterday and he is a great lad and I’m lucky to have him. I’ve been training 22 years and he is only my third stable jockey. I was very spoiled with Choc [Robert Thornton] and Wayne [Hutchinson] and now we have got Tom. It means a lot to me.

“We didn’t start racing Edwardstone until he was five, he was just two or three years in the making. I always thought he was very good, but I couldn’t win a bumper with him. He used to over-race a bit as a novice. He has got better and better.

“Those big handicap hurdles just made him last year, as has a fence. He has always had the potential, but these good horses don’t happen overnight. It has been a team effort. The staff at home do a great job with and Tom does a great job with him.”

Corach Rambler was given a delightful hold-up ride by Derek Fox to take the Grade 3 Ultima Handicap Chase (3m1f) for the Arlary-based training team of Lucinda Russell and Peter Scudamore.

A winner at Cheltenham’s December meeting, Corach Rambler, owned by The Ramblers, was proving his jockey with a first Festival triumph and a second for Russell, who said afterwards: “He is such a lovely horse. His breeder has a share in him and Scu does everything at home with him and we just love him.

“He is quirky and he is odd but he so deserved to win a race at Cheltenham. I’m just delighted for everyone.

“It was a super ride from Derek. After the false starts, he was at the back and I turned to one of the owners and said we are going to have a vintage Derek Fox hold up ride and we did. It is funny as it kind of suits the horse as well as he loves coming through horses.”

The Irish enjoyed their second winner of the day when the Padraig Roche-trained Brazil, carrying the famous colours of JP McManus, took the Grade 3 Boodles Juvenile Handicap Hurdle (2m½f) under Mark Walsh. 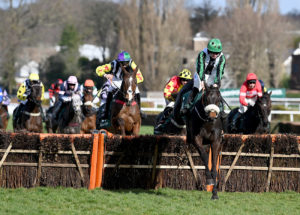