Having secured a Kingman colt for 1.8 million guineas earlier on Thursday’s concluding session of Book 1 of the October Yearling Sale, MV Magnier had the final say when going to 2.1 million guineas for a Galileo filly out of the Oasis Dream mare Quiet Oasis.

The docket was signed in partnership with Georg von Opel’s Westerberg Limited, who made a big impression at the Goffs Orby Yearling Sale when going to €3 million for the sister to Oaks winner Forever Together.

Magnier said: “She is a lovely filly and her full-brother Lancaster House is a good horse.”

Lancaster House, who is trained by Aidan O’Brien, hadn’t even made his debut when the catalogue for Book 1 was published. The three-year-old won his first three races, including a Listed contest, before finishing down the field in the Group 2 Boomerang Stakes behind Space Traveller.

It was a fantastic result for David and Diane Nagle’s Barronstown Stud. Quiet Oasis foaled a Galileo filly this year and is back in-foal to Coolmore’s perennial champion sire.

Earlier in the session, Magnier made it another memorable moment in the Tattersalls ring for consignors Hazelwood Bloodstock when he captured their Kingman colt out of the Australian Group 3 winner One Last Dance.

MV Magnier strikes again as he has the final say at 2.1 million guineas for Lot 525, a Galileo filly from the family of New Approach #TattsOctober pic.twitter.com/7kE9ZBekqX

“He’s a lovely horse and Kingman is obviously doing very well,” said Magnier. “This horse was bred by John Camilleri, who’s one of the best breeders in Australia. He brought the mare up from Australia and she’s produced him a very nice horse.”

Hazelwood Bloodstock were responsible for consigning the 3.6 million guineas Dubawi half-brother to Barney Roy who takes the accolade of being the sale-topper for this year’s edition of Book 1.

In his end of sale statement, Tattersalls Chairman Edmond Mahony said: “There have been some spectacular highlights at Book 1 of the 2019 Tattersalls October Yearling Sale including two outstanding colts breaking the three million guineas mark with the Dubawi colt out of Alina achieving the highest price for a yearling colt in the world this year.

“After eight consecutive years of growth with turnover rising from 51 million guineas in 2011 to last year’s massive 106 million guineas, the aggregate has fallen a little short this year.

“But the sale has still produced turnover in excess of 100 million guineas which is the second highest in the sale’s history and yet again a huge tribute to the vendors who have brought the cream of the European yearling crop to Book 1 of the Tattersalls October Yearling Sale.” 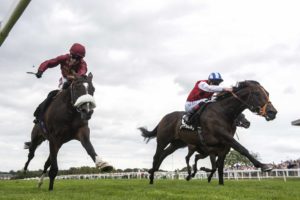 Up Next
Spence targeting Group 1s