For owner-breeder Peter Baker, who operates as Ingleby Bloodstock and is part of The Ivy League syndicate which shares banner ownership of Tees Spirit, winning the Epsom Dash on Jubilee weekend is a memory that will last a lifetime.

It may be in distance terms nothing like it, but for many yards the Dash at Epsom is their Derby. It is an expression that came from Adrian Nicholls this year after Tees Spirit had provided his stable with a valuable and emotional success, five years on from the death of his father Dandy.

The North Yorkshire operation was certainly synonymous with sprint handicap success all over the land in Nicholls snr’s heyday, including at the Derby meeting, when the Dash went the yard’s way five times from 1997 to 2009, via Ya Malak, Rudi’s Pet, Atlantic Viking, Fire Up The Band and Indian Trail.

Nicholls was always good value to talk to for reporters, though you had to rattle through his runners the day before a race you were previewing as he invariably had stacks. He had 12 in the Stewards’ Sprint Handicap at Goodwood in 2003 and 11 the following year, for example.

His son needed just the one in this year’s Derby appetiser, with Tees Spirit keeping on strongly under Barry McHugh to prevail by a head from Mountain Peak and bring up a hat-trick.

For owner-breeder Peter Baker, who operates as Ingleby Bloodstock and is part of The Ivy League syndicate which shares banner ownership of Tees Spirit, winning the race before the Platinum Jubilee Derby is a memory that will last a lifetime.

Explaining his background, Baker says: “I have been interested in the sport since I was young, first accompanying my father back in the 1960s to our then local track, Stockton, which is now defunct after closing in the 1980s.

“I fell in love with horseracing and the excitement of a raceday, regularly travelling over the years to other meetings around the country.

“I always had an ambition to buy my own racehorse and was eventually able to do this by forming a syndicate with my friends who shared a similar interest.”

Baker, who has been an ROA member from when he first started out as an owner, continues: “I’m recently retired, and this has allowed me to concentrate fully on my passion for horseracing. I currently manage a small breeding  operation called Ingleby Bloodstock and a racing enterprise, along with my involvement with The Fallen Angels and The Ivy League syndicates.

“In total since 2010, I have part-owned five horses through these two syndicates. To date, the most successful of these has been Ingleby Hollow with The Fallen Angels; he’s a dual-purpose gelding currently trained by Rebecca Menzies in Sedgefield. Then, with The Ivy League, Dash winner Tees Spirit has of course been our greatest success.”

We select up-and-coming trainers for our horses

Life for Tees Spirit’s handler is, similar to the vast majority in the ranks, no picnic, but Nicholls remains a relatively young trainer, is having a pretty good year and his owner is happy to back the ambition.

Baker says: “Our thought process when selecting a trainer has always been to engage up-and-coming trainers for our horses who appear to show great potential.

“This started back in 2010 when we sent Ingleby Angel to David O’Meara in Helmsley. The horse went on to achieve great success along with Ingleby Hollow, and David has grown since that time to be one of the most recognisable stables in the north.

“Subsequently, our horses have been sent to Rebecca and Adrian Nicholls, who both are now also having great success.”

Having been in the ownership game for a dozen years, Baker has experienced the ups and downs that all owners do, and of his highlights to date says: “One magical moment so far has to be when Ingleby Hollow won in a Class 5 handicap at Thirsk in June 2019. “He was trained on the Flat by David and ridden to victory there by Danny Tudhope – his usual partner. The victory was Danny’s 1,000th career winner on the Flat in Britain. I was so proud of our horse that day and Danny’s after-race comments in which he said, ‘It’s great to get there and I was delighted to do it on this horse – I’ve got a soft spot for him’.

“It was a great feeling to have contributed towards Danny’s milestone achievement.”

He adds: “My second magical moment is definitely Tees Spirit winning the Epsom Dash at this year’s Derby meeting. It was an unbelievable result for the other members of the partnership and myself.

“The atmosphere and spectacle at Epsom was fantastic and made all the more incredible by our horse’s performance. I’ll never forget the moment Tees Spirit passed the winning post and we all erupted in celebration.”

That sure sounds like the epitome of a magical moment, one that was followed of course by a firework display at Epsom shortly before the next race, which the owners of the Dash winner possibly enjoyed rather more than their counterparts with runners in the Derby.

Baker continues: “The best part of racehorse ownership has to simply be being involved with the horses and the sport. I get a real buzz from going to the races, whether it is an ordinary contest or a major event in the racing calendar, knowing that my horse is involved and partaking in a race.

“The worst part of owning racehorses is losing horses who have been a large part of your ownership journey and you have become attached to.

“Our breeding operation was  originally founded with three broodmares, and we recently lost the last mare, Mistress Twister, who died earlier this year at the age of 21 having produced nine live foals. Tees Spirit was the penultimate horse that Mistress Twister produced.”

Tees Spirit, by Swiss Spirit, has certainly been another good one, and as a four-year-old gelding can at least hopefully continue to provide his  owner breeder with plenty of success and fun. 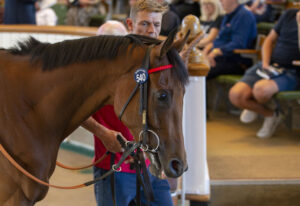 Up Next
International investors descend on Tattersalls