Getting to Newbury for Ladbrokes Trophy day at the end of November was not plane sailing for Carron and Bruce Wymer – the owners’ original flight from Scotland was cancelled and, rather than risk the same thing happening on raceday morning, they hit the road. All 400 miles of it.

Their huge effort to be present to see Ahoy Senor, who they own with trainer Lucinda Russell’s father Peter, have his second start over fences was rewarded by a pillar-to-post victory in the Grade 2 John Francome Novices’ Chase.

The son of Dylan Thomas, who turns seven this month, was already a Grade 1 winner, over hurdles, for the Wymers and Russells, having landed the Sefton Novices’ Hurdle at the Grand National meeting in April, scene of course of the Kinross yard’s most famous success with One For Arthur in the 2017 National.

But having come from the point-to- point field, Ahoy Senor’s future was always likely to lie over fences, and having unseated Derek Fox two out in the Colin Parker Memorial on his chasing debut at Carlisle the month before, a safe, successful round under the same rider at Newbury was just what the doctor ordered.

As for her own background and route into ownership, Carron Wymer explains:

“Racehorse ownership wasn’t really something we ever seriously considered. We had mulled the idea on outings to Perth but never seriously.

“My father, Barnett Kay, unfortunately passed away in December 2018. He wasn’t a man of means, lived in a warden controlled bungalow and saved up over several years off his state pension to leave a small inheritance for me.

“He loved the gee-gees and spent pretty much every day watching and having a flutter. Growing up, this was the bane of my life. Watching TV was impossible as he would always change the channel to view the races.

“Most weekends were spent running back and forth to the local bookmakers to stand outside waiting until a punter going in would agree to put on my dad’s bet. It would usually be 50p each-way on the favourite. If the bet wasn’t placed in time and the horse came in first, then my grumpy old man would make sure I knew about it. All this meant horseracing wasn’t a sport that rated highly with me.”

She continues: “Having been left this small inheritance and feeling I couldn’t spend it frivolously, I just left it in the bank knowing I wanted to do something with it in my father’s memory. It was about ten months later that we were getting our house decorated and the decorator was very enthusiastic about his racehorse ownership.

“Racehorse ownership was not something we seriously considered”

“This started Bruce and I thinking this would be more befitting to his memory than a memorial bench or such. Jim, the decorator, put us in touch with our local trainer, Jackie Stephen, who invited us up to see the horses they had in training. We didn’t want to choose a horse without looking at other trainers, as it was a very emotional purchase. We knew the name Lucinda Russell from our visits to Perth and of course her Grand National win.

“We arranged to visit Arlary on November 19, 2019 to view the horses she had for sale. We looked at a few but fell in love with a young filly in training, Calle Malva, which we bought an eighth share of.”

Getting up to date, she says: “We currently have four horses in training/pre-training which we share 50/50 with Peter Russell, Lucinda’s father.

“They are Calle Malva, Without Conviction, who we went to the Doncaster sales and chose with the help of Paul [McIvor, the stable’s race planner and handicapper], Scu [Peter Scudamore, the trainer’s partner], Lucinda and Belinda [McClung, jointowner of One For Arthur], Ahoy Senor and a three-year-old store we got to name Tenbobeachway after my dad’s usual stake.

”We fell in love with Calle Malva and it was just our good fortune that Lucinda had her for sale. In the two years we’ve been owners with Lucinda, we’ve learned so much about the sport and feel privileged to have horses in training with such a fantastic, caring team of people.

“Whenever we visit we’re impressed by how well the team works and how welcome we’re always made to feel. It’s as if we’re visiting friends.”

Asked to recall their most memorable days on the track to date, Wymer replies:

“The most magical moment was on December 11, 2019. We drove to Hexham – gosh it was freezing, not the glamour and hats I was hoping for!

This was our first outing as owners. Calle’s race was the last on the card. We had a flutter on the other races but no joy.

“As the day went on and all feeling had left our fingers and toes, we began to wonder if indeed racehorse ownership was for us. There were seven runners in Calle’s race, including Brigade Of Guards, ridden by Richard Johnson. This was significant to us because my sister had passed away, when I was a young teenager, giving birth to her only child, which she named Richard Johnson.

“Unfortunately his father lost touch with our family and this led to him growing up not knowing us. So whenever we were at the races I always felt compelled to back his namesake jockey.

However, the champion jockey, as he was, never won for me. To hedge my bets on this day, I had to make sure to jinx him and placed a small bet on him as well as Calle.

“As the race progressed it appeared that Calle wasn’t a contender having dropped ten lengths behind the two leaders. However, she started to rally and the commentator called it very well, saying, ‘Don’t rule out Calle Malva’. We were absolutely delighted when she crossed the line first.

“I think my dad must have been watching and gave her a push up the hill.”

“I was bursting into tears as Scu called Lucinda to let her know the news. I think my dad must have been watching and gave her a push up the hill. The following day, and on the back of all the emotion, we increased our share to a quarter. This subsequently became a half.”

Mid-November 2020 was a significant time for the Wymers, as Carron explains, saying: “Calle’s subsequent win at Newcastle came the day after the Yorton sale, where Jonbon sold for a hell of a lot of money. Lucinda and Scu were at the sale and we had the shortlist but no intention of purchasing.

“We’d watched Ahoy Senor’s point, however, and had questioned Scu about him after Calle’s win. We decided we’d go in and meet him on our way home.

We celebrated Calle’s success with Lucinda whilst waiting for him to arrive, and when he came off the lorry, we were so impressed with his size and presence that a handshake sealed the deal.

“Lockdown meant we couldn’t attend his first two races but we were  delighted with his win at Ayr. Lots of meetings were being abandoned due to the weather conditions, so we were quite frustrated when Scu pulled ‘Hank’, as he’s called, out of a race at Hexham, however we always trust their judgement.

“We were quite surprised to get an email with an entry for Aintree and kept our fingers crossed the ground would be right. We were excited for our first visit to Aintree and at 66-1 of course we had to place a bet!

“The track was very empty and it felt rather surreal being there. We didn’t realise how significant the win was, having owned horses at this point for only 17 months. We were, however, delighted with our spoils from the bookies!”

With crowds back, the atmosphere on Ladbrokes Trophy day was never going to be an issue, but it had been a cold, windy week and the Wymers’ travel plans were thrown into disarray.

Carron says: “Storm Arwen! We’d planned to fly from Aberdeen to Heathrow, as we like to be there to see the horses run. This was scuppered by the storm. We changed our flights to leave from Glasgow the following morning and drove through the storm that evening to get to Glasgow for the flight.

“We spent the night at the airport hotel with the intention of getting our flight at 7am, however on waking at 4.30am and with the storm still raging, we decided to drive to Newbury. We made it 30 minutes before the first race.

“Hank is a horse of dreams”

“Watching the race was nerve-racking, Hank’s jumping wasn’t quite what we’d seen at Carlisle and we watched with our fingers crossed, willing him to get round safely. The win was all the more special as Bruce’s family were there to share it with us.

“We feel like Hank is a horse of dreams and keep pinching ourselves at how incredibly lucky we are to be involved with him and our other horses.”

One of those other horses, Without Conviction, duly followed Ahoy Senor’s example a week and a half later at Hexham. He might not have won by 31 lengths, and it might have been a modest handicap chase, but the four-length victory was the first of his career and so a sweet little fish to the Wymers and Russells all the same “It was only a four-and-a-half hour drive this time, so of course we were there!” says Wymer. “Lucinda’s team is on fire just now. This was the same meeting that Calle won her first race for us two years ago. What an amazing two years we’ve had.”

Owning racehorses is generally, of course, a bit like that flight to London would have been that late November day, a bumpy ride, and the pandemic has exaggerated that.

Wymer says: “Having owned horses for only two years, and during lockdown, for us the most frustrating part has been not being able to enjoy the full owner experience, and racing being completely cancelled. Also, prize-money at the lower levels leaves you wondering if it’s worth the risk.

“For us, the best thing is obviously winning, but we appreciate how much these experiences have taught us about an industry I personally disliked.

We are now well and truly obsessed with this sport.” 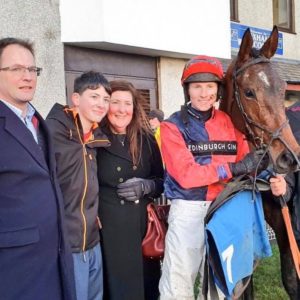 Carron and Bruce Wymer are enjoying the ride as racehorse owners. Pictured here with Calle Malva. 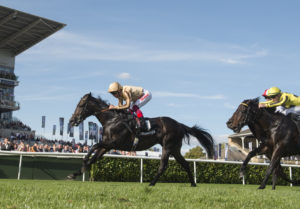 Up Next
TBA Flat stallion parade returns to Tattersalls