Poetry in motion. That is often the phrase associated when jockey Bryony Frost and Frodon unite together and on Saturday the potent combination struck in the Grade 1 King George VI Chase at Kempton Park.

The pair once again wrote their names into the record books, over a year on from their historic success in the Grade 1 Ryanair Chase at Cheltenham in 2019, as Frost became the first woman to ride the winner of the King George.

This year’s renewal, which featured Clan Des Obeaux bidding for a hat-trick of wins, was all about tactics. Frost’s decision, as the fielded walked towards the starter, to angle Frodon out wide and gain the lead as the tape went up proved extremely decisive.

It allowed Frodon and Frost to race in their customary fashion in front, setting a fractious early pace before slowing the tempo markedly to suit them perfectly, and as they travelled through the back straight, the field began to bunch together turning for home.

As Frodon jumped expertly, a series of errors had crept into Clan Des Obeaux’s challenge while the Colin Tizzard-trained Lostintranslation also looked to be in trouble. Stablemate Cyrname was still in the middle of the pack but had yet to make his move on the leader.

Saint Calvados kept up with Frodon as they entered the home straight, but it was to no avail, as Frodon and Frost continued to do everything they needed to keep their rivals at bay with superbly measured jumps over the final three fences.

Waiting Patiently, returning after a lengthy layoff, was flashing home up the run-in but there was no stopping Frodon and Frost as they passed the winning post two and a quarter lengths to the good.

Clan Des Obeaux rallied to finish third while Santini dropped back to fifth. Both Cyrname and Lostintranslation were pulled up. 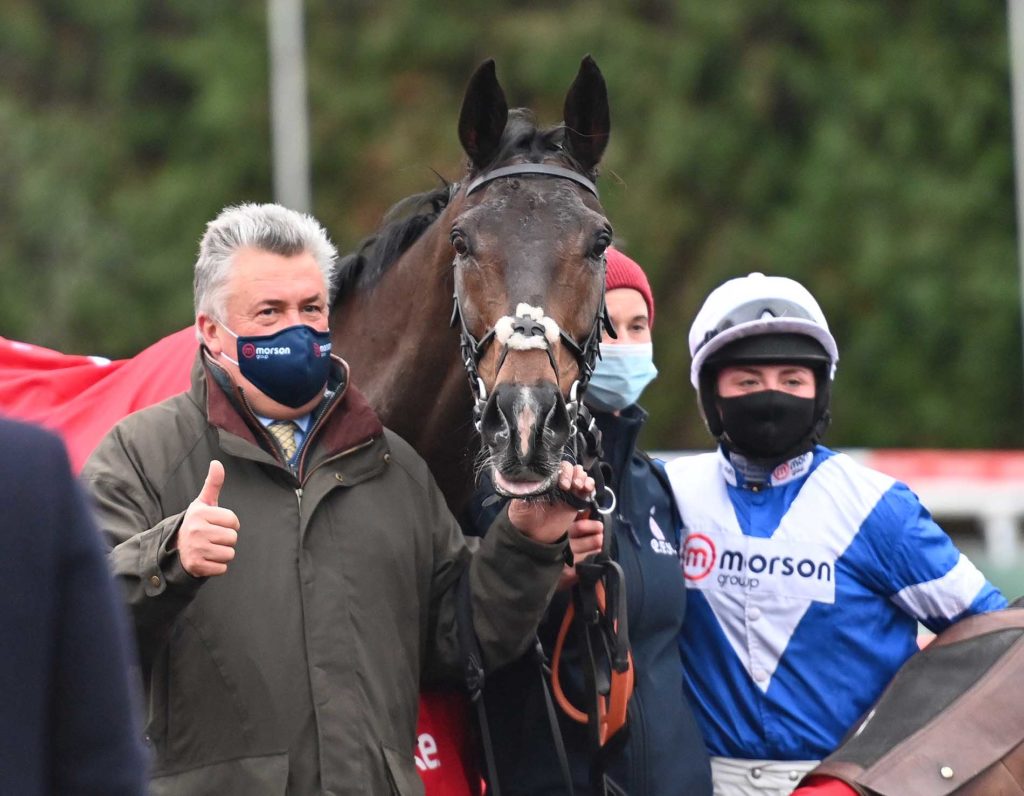 An emotional Frost, landing yet another Grade 1 on a horse that has been vital to her career, said: “We’ve just won the King George! I’ve just had the best time on him – the dark days and the hard work you get thrown at you are now worth it. He’s smashed expectations.

“He was squealing getting on the lorry travelling up and was a bit of a monkey at the start but he settled down. I got a few breathers in him and one last kick out of him, I was thinking ‘where is the line’.”

Frost recorded another milestone with the historic victory as it saw her notch a 175th winner under rules to become the winningmost female jockey in Britain of all time.

She added: “I talked to my brother in America last night and he said how cool would it be if I did it on Frodon in the King George? He was right!”

For Paul Nicholls it was a 12th success in the prestigious race and the trainer said: “I wasn’t expecting that although he’s a very good horse on his day and loves it round here. I said to Bryony go as quick as you can and just keep galloping, you know he’s tough and brave.

“I think he took the micky out of us at Aintree the other day when they missed out all those fences, he came back very fresh and we’ve done some serious work with him over the last two or three weeks.

“He probably doesn’t know what’s hit him, but he thrives on it hence today he’s gone and done that.

“Clan Des Obeaux had a very, very hard race at Haydock and ran a bit flat. He got a bit behind and didn’t jump too well. Cyrname seemed to spit the dummy out when he got dropped in behind and probably likes to dominate but this horse [Frodon] keeps going a gallop and never knows when he’s beat.””

Shan Blue continued his prominent rise through the novice chasing ranks when a superb round of jumping at Kempton helped the gelding to hold off The Big Breakaway to claim the Grade 1 Kauto Star Novices’ Chase.

Always looking like he was destined to be a chaser, given his sire is none other than renowned jumps stallion Shantou, Shan Blue had taken two novice chases at Wetherby in October by a combined 30 lengths.

Those performances meant the six-year-old was sent off favourite in the three-mile contest and as the field turned in for him, it was clear that the only danger as the final three fences loomed was The Big Breakaway.

With every stride, Robbie Power was beginning to loom upside but an exemplary jump from Shan Blue helped the youngster to regain his advantage and win by three and three-quarters of a length. 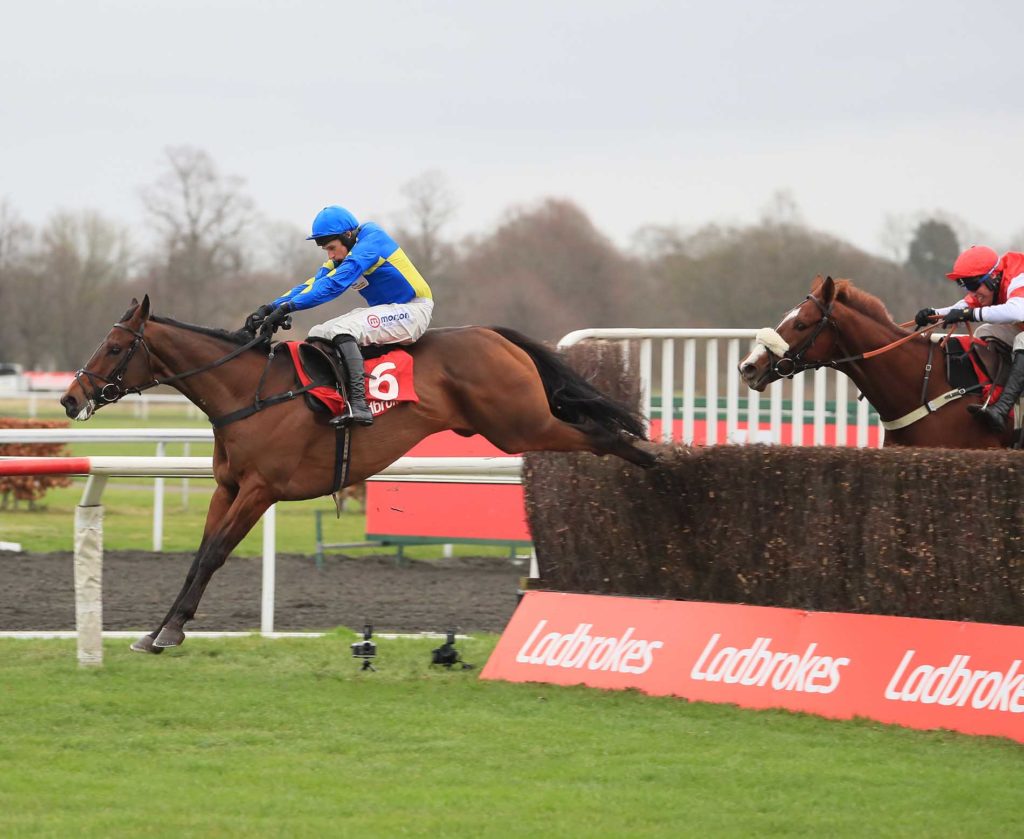 It was third Grade 1 success for Harry Skelton this season and the jockey said: “We said we’d be brave and try to dominate it from the front. He’s stepped up on his two runs and he was very good.

“His jumping is a massive asset to him, and he wants it. He’s always looking for the next fence and as soon as he’s landed, he pricks his ears.

“I wasn’t surprised how he kept going but he had to dig in from two out. There’s lots of options going forward with him in the spring, but today was very important. It was a first Grade 1 for the owner [Colm Donlan] with us. It’s brilliant for him.”

Trainer Dan Skelton added: “I’m not saying he’s definitely not a Cheltenham horse, but what was the RSA could be a real stretch for him. I don’t think he’s a slogger and he proved that with how nimble he was at his jumps.

“We’ve got to protect him, but he’ll get entered in both and we’ll probably go to the Scilly Isles en-route. He has a Grade 1 penalty now and he’s proven he can do it at this level.”

Silver Streak’s day in the sun

Too often the Evan Williams-trained Silver Streak has been the bridesmaid in top-level contest but at Kempton the gallant grey gained a deserved Grade 1 when lowering the colours of Epatante in the Christmas Hurdle.

The win more than made up for being carried out of the Grade 1 Fighting Fifth Hurdle before finishing a nose second in the International Hurdle last time out.

Winning jockey Adam Wedge said: “He was brave as a lion out there for me. Me and Evan [Williams, trainer] were chatting all over Christmas and we thought we had one chance of beating Epatante by taking the race by the scruff of the neck. Thankfully it worked.

“He’s fantastic and an absolute gent to do anything with. He has lovely owners and it’s a great team effort to get him back from a hard race at Cheltenham like he was today. It was fantastic.” 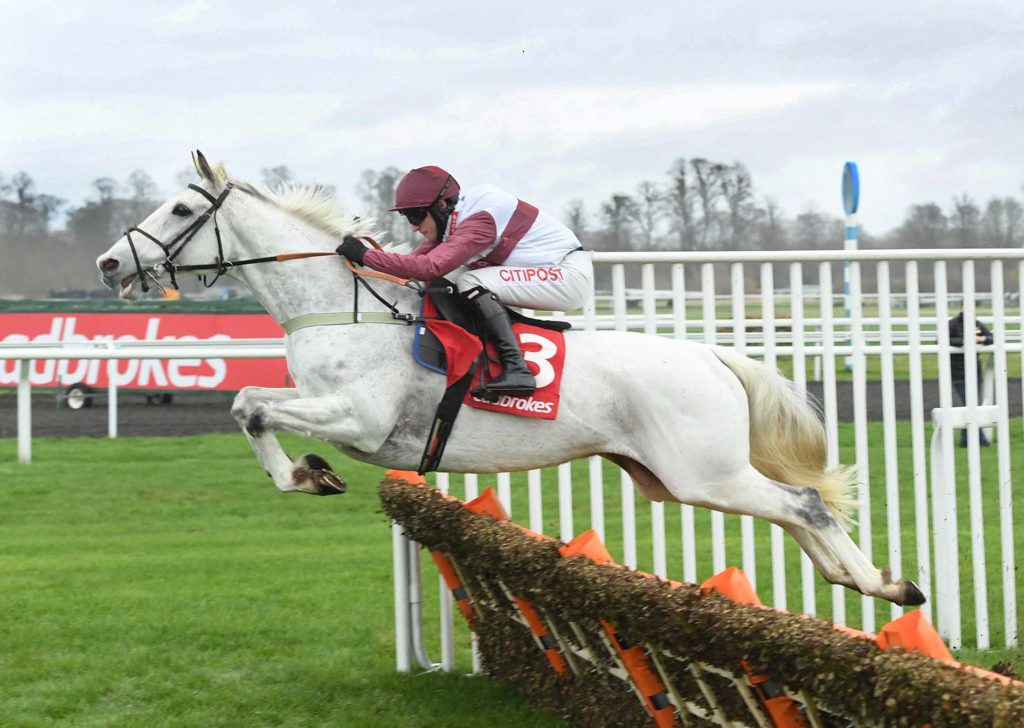 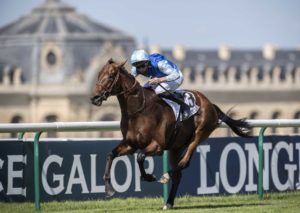 Up Next
Haras d'Etreham entering 2021 with upwardly mobile stallion roster