He came to Town Moor with a big reputation and Luxembourg didn’t disappoint his followers as the hot favourite extended his unbeaten record to three races with a comprehensive victory in the Group 1 Vertem Futurity Trophy at Doncaster on Saturday.

Previously successful in a Killarney maiden and the Group 2 Beresford Stakes at the Curragh, Luxembourg was bidding to provide trainer Aidan O’Brien with a remarkable tenth strike in the mile feature to match the record set by Sir Henry Cecil.

Ryan Moore settled the son of Camelot in midfield as Royal Patronage and Jason Hart set the early fractions, tracked by Jim Bolger’s Mctigue and Sissoko, trained by Donnacha O’Brien.

As the field approached the three-furlong marker, Moore asked his mount to make his effort on the far side and under just hands-and-heels riding, Luxembourg duly went to the front with two furlongs to run.

He galloped on strongly inside the distance to record a decisive length-and-three-quarter success over Sissoko, with Bayside Boy getting the better of Hannibal Barca for third, just ahead of Imperial Fighter. 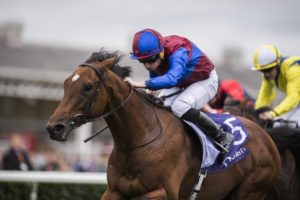 The winning jockey said: “I’m delighted. He’s a real smart horse. He travelled really well and I lost my cover at halfway but had to keep going, and he hit the front without me asking.

“He just waited a bit and I had to just grab a hold of him the last 100 yards and he found a bit more. He’s an exciting horse and I think there’s more improvement in him.”

The David Simcock-trained Light Infantry was a most taking debut winner over six furlongs at Yarmouth last month and the son of Fast Company took the step up to Group 3 company in his stride with a ready success in the Horris Hill Stakes (7f) at Newbury.

Jamie Spencer bided his time on Light Infantry, racing in the silks of the Never Say Die Partnership, who hit the front inside the final furlong and ran on strongly to defeat Cresta by a length and a half.

Hollie Doyle has endured yet another record-breaking year and the rider enjoyed a fine afternoon at Newbury, with easy wins aboard Jumbly in the Listed Radley Stakes (7f) and Gisburn in the six-furlong nursery.

Cheltenham staged an interesting Saturday card and Sam Twiston-Davies recorded a double, kicking off with victory aboard Anne-Marie and Jamie Shepperd’s I Like To Move It in the Masterson Holdings Hurdle (2m½f) for his father Nigel, and following up aboard the Sam Thomas-trained Before Midnight for owner Dai Walters in the two-mile handicap chase.

Ralph Beckett is unlikely to have trained many tougher two-year-olds than Marc Chan’s Angel Bleu and the son of Dark Angel made it two Group 1 wins in France within three weeks with a head success over Ancient Rome in the Criterium International (1m) at Saint-Cloud on Saturday. Frankie Dettori was again in the saddle, having partnered the colt to victory in the Prix Jean-Luc Lagardere at Longchamp on October 3.

Just 40 minutes later, Newmarket handler James Ferguson was celebrating his first strike at the top level in just his second full season with a licence when his juvenile El Bodegon and Ioritz Mendizabal recorded a decisive success in the Group 1 Criterium de Saint-Cloud (1m2f). The winner, a son of Kodiac owned by Nas Syndicate and A F O’Callaghan, looks a genuine Classic contender for 2022. 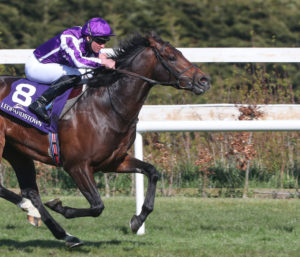