An intriguing renewal of the Phoenix Stakes at the Curragh on Sunday saw the Jessica Harrington-trained Lucky Vega demolish his rivals with an impressive performance to land the Group 1.

That success represented a first top-level strike for Zhang Yusheng of Yulong Investments, who began owning horses in Australia in 2014 having visited the country the year before to watch the Melbourne Cup.

Since then, Yulong Investments has continued to increase its presence, both in Australia and other racing jurisdictions, including the United Kingdom and Ireland.

BBA Ireland and Yulong went to €175,000 at last year’s Goffs Orby Sale to secure Lucky Vega as a yearling from the Baroda Stud draft.

Speaking after the colt’s success, Harrington told the Racing Post: “That’s Mr Zhang’s first Group 1 winner worldwide, so I’m thrilled for him. I’m absolutely delighted for the horse too. He’s nice and Shane [Foley] said he’s getting quicker all the time.

“He probably needed it the last day because he had won his maiden without getting into a battle. The last day, when he got into a bit of a battle, it just hardened him up. He was much more streetwise and, on his work at home, he had really started to come to himself.

“We thought he was working well but you never know until you go racing and everyone said this was a strong renewal of the Phoenix.

“We’ll have to sit down and have a think about where to go now, but Shane said we should probably be thinking about the Middle Park. I think he’ll get seven as well. Last year was all about the fillies so it’s great this year to come up with a good colt.”

Lucky Vega is by Ballylinch Stud’s outstanding sire Lope De Vega, who stood his tenth season at the Irish operation this year at a career-high fee of €100,000.

Space Blues followed up his Lennox Stakes win at Goodwood with a striking success in the Group 1 Prix Maurice de Gheest at Deauville on Sunday.

In victory the son of Dubawi ended the unbeaten run of his Godolphin companion Earthlight, who could only manage fourth in the contest.

Charlie Appleby, who trains Space Blues, said: “Seven furlongs is his trip. I’m happy to have as many good horses as we can and if it means running them together, then it’s a sport.

“One thing His Highness [Sheikh Mohammed] likes to see is sport and competition. We’ll see who is best [between him and Pinatubo] in the Foret.

“I’ve been very lucky to have Blue Point in the yard and as a five-year-old, you see them getting stronger. This horse couldn’t have come into the race in better shape and a better profile, with confidence behind him.

“Every race he has stepped up in calibre and has won more impressively. From halfway, I knew they’d gone a very strong gallop and I thought they were either very good horses in front or it was going to be set up for a horse that comes late.”

Our Bloodstock Editor Nancy Sexton has taken a deeper look into the pedigree of Space Blues, which you can read here.

Dropped down in grade, Cheveley Park Stud’s Regal Reality secured a first victory since May 2019 when a three and a half length winner of the Group 3 Sovereign Stakes at Salisbury on Sunday.

That was the second stakes victory over the weekend for the outfit having been represented by Veracious, who took the Listed Dick Hern Stakes at Haydock on Saturday.

Hollie Doyle’s new partnership with owner-breeder Imad Al Sagar has started strongly and on Saturday the pair combined for their first Pattern winner together when Extra Elusive captured the Group 3 Rose Of Lancaster Stakes at Haydock.

Doyle said: “He has a tendency to pull quite hard and there was no pace in the race, so Roger and the owners said ‘just go forward and ride him where he’s happy and relaxed’. He switched off beautifully, I got into a good rhythm and the further he went the better.

“He gave me a good feel. He’s a nice horse who will stay a mile and a half. I couldn’t have got off to a better start really. I’m having a good season. Hopefully we can keep it going.”

The Ontoawinner syndicate, who famously campaigned the Group 1-winning Quiet Reflection, look to have another exciting filly on their hands with the Kevin Ryan-trained Star Of Emaraaty.

The daughter of Pride Of Dubai showed a good attitude to head the Mark Johnston-trained Dubai Fountain in the final stages of the Group 3 Sweet Solera Stakes at Newmarket before pulling away to win by a length and a quarter. 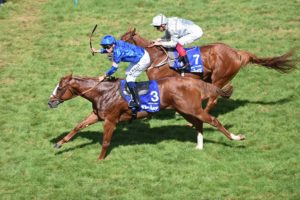 Up Next
Earthlight out to extend unbeaten record