Louis-Philippe Beuzelin on the comeback

Having endured a difficult time since leaving Britain for France – a decision he now regrets – former star apprentice jockey Louis-Philippe Beuzelin is hoping to return to the limelight.

Beuzelin made a good impression as an apprentice in Britain Now 25, Beuzelin sprang to fame on this side of the Channel eight years ago when apprentice to Sir Michael Stoute. His very first ride for the stable was a winning one aboard the once-raced mare Spy Eye on Newmarket’s July Course.

One year later, Beuzelin found himself in contention for the apprentice jockeys’ championship, finishing third behind David Probert and Freddie Tylicki after scooping a creditable 25 winners.

However disaster struck that November when he was involved in a serious car crash while on holiday in his native Barbados. The accident left him with eight broken ribs, a ruptured spleen and a punctured lung.

“I started riding race-riding again in March 2010 and that was too soon – mentally, rather than physically, I was still not myself,” reflected Beuzelin.

Despite that setback, Beuzelin went on to land a massive payday in the autumn of 2010 when steering the Brian Meehan-trained Aaim To Prosper to victory in the Cesarewitch. That triumph remains the highlight of his riding career although a win in the 2014 Bangalore Derby win must rank highly.

Before the end of the following year, he made the decision to relocate to Chantilly having ridden only six winners from 150 rides in Britain that year. It didn’t help that during that time two of his biggest employers, Meehan and Stoute, were experiencing downturns, and in fact the latter was having his worst year for over three decades.

Beuzelin continued: “Looking back, it was a big leap to leave Britain. I was starting from scratch in a new place without a claim, and although my godfather, the bloodstock agent Marc-Antoine Berghracht, promised to help me, it was incredibly difficult to make new contacts.”

Five years into his new adventure, Beuzelin has added just over 40 winners to his tally even though he feels certain aspects of a jockey’s life in France compare favourably. A distinct culture change, five-time French Derby-winning trainer Pascal Bary told him that for for a jockey to survive in France, you need to be “in fashion”.

“It’s a decision that I regret every day and I have often thought of going back to Britain,” Beuzelin explained. “Mentally it is much tougher over here, you do not get properly recognised for what you do, unlike in Britain where you get clapped and appreciated when you win a race.

“Jockeys are much lower profile here as no one watches. If you go racing in the week the stands are empty.”

After a long period of booking his own rides, very much a task in itself, Beuzelin now has an agent in the form of Kevin Bouillie and things are on an upward curve.

He is currently riding out for the likes of Arc-winning trainer John Hammond, Henri-Francois Devin and Bary, whose three-year-old filly Mango Tango has given the rider much to look forward to.

A daughter of Siyouni, she finished just under a length fourth in the Group 2 Prix de Malleret at the start of July before finishing runner-up in the Group 2 Prix de Pomone on August 13 with Beuzelin in the saddle. Her entry in the QIPCO British Champions Fillies and Mares Stakes next month could see Beuzelin make a one-off trip back to Britain. 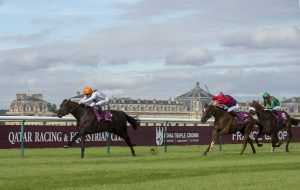 Up Next
Wicklow Brave upsets Order in Irish Leger