World at his feet
Stories

The final day of the Cheltenham Festival proved also to be the most dramatic with 20/1 shot Lord Windermere landing the Gold Cup for trainer Jim Culloty, who is famed for having ridden the great Best Mate to three victories in the race.

The winner first had to survive a photo-finish verdict then a lengthy stewards’ enquiry called after he drifted to his right on the run-in with runner-up On His Own and third-placed The Giant Bolster both taken across the track with him.

Lord Windermere kept the race, however, and became the third winner from just three runners at the Festival for Dr Ronan Lambe, whose Silver Concorde won the Weatherbys Champion Bumper on Wednesday for Dermot Weld, while another from the Culloty stable, Spring Heeled, landed Thursday’s Fulke Walwyn Kim Muir Challenge Cup.

“I’m in a total state of disbelief,” said Culloty, one of five men to have ridden and trained a winner of the Gold Cup. “I couldn’t believe it during the race and then when the stewards’ enquiry was announced, I thought we were certain to lose it given my luck.”

Culloty added: “Cheltenham has made all the difference to him – he loves it round here. We suspected he needed to come back here to show his best and I just told Davy to drop him out and ride his own race. Last year, people kept saying that Boston Bob would have won but I always knew we were the worthy winners and he’s showed just how good he is.

“Everything this horse has done suggested that the Gold Cup was the perfect race for him. When we ran him at Leopardstown [in the Hennessy Gold Cup], we learned a lot about him and decided the best thing to do was to drop him out and let him find his own way into the race.

“The horses just haven’t been right this year but, then again, I’ve only got about four that are mature enough to run. Two have won now at this meeting so it’s ended up being the best season ever!”

The Gold Cup victor was the highlight of an outstanding day for jockey Davy Russell, who, just over two months after losing his Gigginstown House Stud job also rode a double for Michael O’Leary’s operation in the JCB Triumph Hurdle aboard Tiger Roll and in the Festival finale, the Johnny Henderson Grand Annual Chase, on Savello. Gigginstown House Stud enjoyed a total of four winners on the day, with Very Wood (ridden by Paul Carberry) and Don Poli (Mikey Fogarty) also obliging.

O’Leary’s retained rider Bryan Cooper, who succeeded Russell in the job, suffered a nasty fall on the Wednesday of the Festival which resulted in a badly broken leg, and he wasn’t the only jockey in the wars during the week.

On Friday, Ruby Walsh was taken to hospital with a broken arm and dislocated shoulder following a fall in the JCB Triumph Hurdle. With Daryl Jacob managing an heroic fourth-place finish with no stirrups on the favourite for that race, Calipto, Paul Nicholls’ stable jockey then won the following contest, the Vincent O’Brien County Hurdle, for his boss aboard Lac Fontana but less than an hour later was himself being transported to hospital following a shocking fall from Port Melon on his way to post for the Albert Bartlett Novices’ Hurdle. Jacob subsequently underwent surgery on his broken leg, knee and elbow. 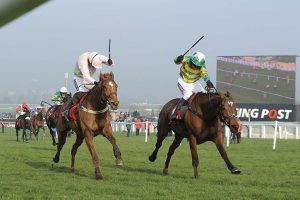 Up Next
World at his feet