Not long now and the flag will be raised to start the biggest four days in British jump racing. People talk about the Road to Cheltenham from a racing angle, but it also applies to breeders, and runs from the TBA Stallion Parade at the Open meeting right through to the Festival itself.

The journey generally takes longer than one season, but it’s still a Road to Cheltenham, ending at a championship meeting that brings everybody together, from the top yards to those preparing horses for the Foxhunter Chase, from the highest class to the more aspirational.
And it’s a meeting where mares have their rightful place, and, I hope, will soon have a slightly more prominent place if the Cheltenham executive adds an extra event on the Thursday to create a balance of seven races each day.

The TBA’s National Hunt Committee, which happens to be chaired by the Cheltenham Chairman Robert Waley-Cohen, has been campaigning for another mares’ race for some time, and we would like it to be a second hurdle, a championship novices’ event to match the Supreme Novices’ Hurdle. That way there would be a natural career progression to the OLBG Mares’ Hurdle, which I’m delighted to see has had its prize-money increased from £85,000 to £100,000 and been raised to Group 1 status.

The perfect Festival scenario would be two hurdles and a chase for mares, but we have to take things one step at a time

This is a tremendous incentive for breeders and owners of mares, but at the moment the race stands alone, which is why we believe it’s important to add another Festival opportunity. We’re not closed to the idea of a mares’ chase, which has also been suggested, but at this stage we feel it would be better to introduce a novices’ hurdle as a platform to the bigger race the following year.

There are a number of good black-type mares’ chases in Ireland, but not in Britain, where we have only the TBA-EBF mares’ novices’ chase series, with a Listed final. In fact, staging a top-class mares’ chase in isolation might fly in the face of what breeders require, since a jumping mare who’s proven with black type over hurdles is more likely to be off to the paddocks by the age of six or seven than automatically being kept in training to go chasing. That situation may change over time, and the perfect Festival scenario would be two hurdles and a chase for mares, but we have to take things one step at a time.

Introducing a mares’ novices’ hurdle would be the start of the journey, and we may have to be prepared for the race not to reach the maximum field of 22 runners in its first year, simply because of immediate availability. But we are confident it would happen, because already it’s noticeable that the top stables have all got mares in their yards, whereas they didn’t a few years ago. In the meantime, mares’ race may have to be ring-fenced against abandonment under the BHA’s small-fields regulations, in order for more mares to be proven on the racecourse.

In this context, it’s worth repeating one of the major points in the economic study commissioned by the TBA last year, which highlighted the fact that 40% of the levy, one of the prime funders of British racing, comes through National Hunt.

Cheltenham is the pinnacle, and not just for owner/breeders. The market is equally important, which, of course, benefits commercial breeders. And as far as mares at the Festival are concerned, there’s now a reason to buy jump-bred fillies, which wasn’t there before the David Nicholson race – now the OLBG – was introduced. Overall we now have 22 black-type opportunities for mares, which the TBA has been behind, putting in our own money, supported by the BHA. It’s a very different situation from ten years ago.

On the subject of aspirations, the Godolphin Stud and Stable Staff awards featured three excellent candidates on the short list for the stud category – Dale Clements of Cheveley Park Stud, Jessica Fortt of Dunraven Stud and Ron Lott of Shadwell. The overall competition seemed to be even stronger than in previous years, and as well as thanking Godolphin for its continued support, a pat on the back must go to those stud owners and managers who nominated their staff for such a worthy award. 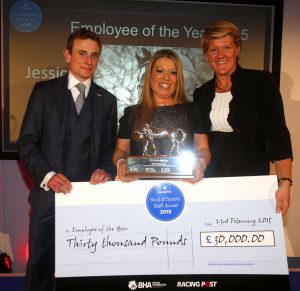 Up Next
Jessica Fortt crowned Employee of the Year